Yet Another Reason to Hate Licorice

Finland says: stay away if you're pregnant. 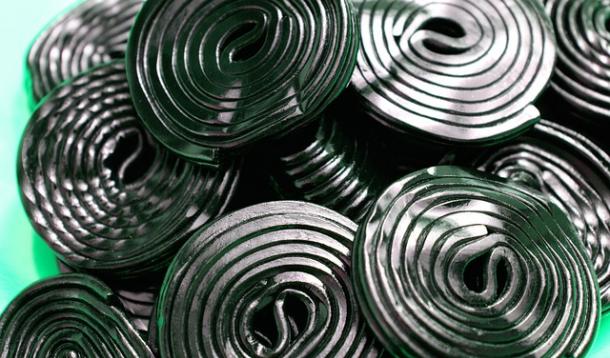 If you don't already hate licorice simply because it's licorice, now medicine says there's other scientific reasons to get you on board with the rest of us. The gross "candy" more accurately described as "the Devil's toothpaste" may also be bad very bad for unborn children, says the University of Helsinki in Finland.

The study examined 378 youths of about 13 years of age, and compared children whose mothers had consumed "large amounts" of licorice to the children of women who didn't. Licorice is a product which does not currently have a known safe limit of consumption. Specifically, the chemical being looked at is glycyrrhizin, the chief sweet-tasting ingredient of the licorice root, which does have some known medicinal uses. 250g of licorice candy has about 500mg of glycyrrhizin in it, and the study was comparing women who had 500mg or more of glycyrrhizin  to women who consumed 249mg of glycyrrhizin or less on a weekly basis.

In animal testing, glycyrrhizin is responsible for intensifying the effects of cortisol, the stress hormone, because it inhibits the enzyme that deactivates it. Cortisol is important to a developing fetus, but it can be harmful in large amounts.

The study, published in the American Journal of Epidemiology, says that children who were exposed to large amounts of glycyrrhizin in utero scored less well in cognitive reasoning tests. The differences were equivalent to approximately 7 IQ points.

Children of mothers who consumed large amounts of licorice while pregnant also performed more poorly in memory testing and had 3.3 fold odds of having attention deficit/hyperactivity disorder.

So there you have it, moms. If you are not one of those people who said "people actually chew the sickly-sweet candied jock strap of Hitler?" and have an irresistable urge to eat licorice, try to refrain.

Finland says a little bit won't hurt you or your baby. But licorice has also been recalled for containing lead before. It can raise your blood pressure. And if you eat too much of it, it can turn your poop blue. And the taste lingers in your mouth forever and ruins the taste of everything you put in your mouth forever after. So we're going to stick with the opinion that we can't even understand why this stuff exists on the planet and is actually called candy except to teach kids about the reality of disappointment and lies.

RELATED: Helicopter Parenting and Food: Are We Going Too Far?