Helicopter Parenting and Food: Are We Going Too Far? 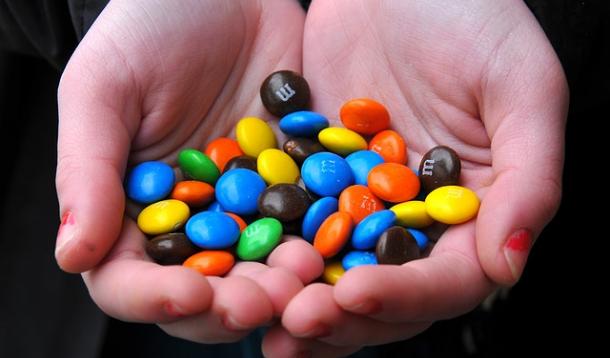 Those shelves full of gum, candy bars and crappy magazines next to the check-out? They call it the impulse buying section for a good reason. If those things weren't there, most of us would never actually seek them out. But there they are, in plain view and easy reach. It's a single serving. You deserve a treat, right?

And that's how it works.

Most of us adults learn to tune out the impulse section when we're shopping on our own, except when we're having a craving for a sweet or we realize (as we stare into space through the packs of gum) that our breath isn't so fresh. It's easy to tune out the siren lure. But kids? Poor Impulse Control is basically their modus operandi. They see something, they want it. They might never have even heard of it before, but all of a sudden, they need it.

When you're a parent, you learn to hate the impulse section just a little bit. Every time you pass one, it's like landing on "Go to Jail" in Monopoly. Except jail is a hell where you say no and get whining, begging, and temper tantrums. Do not pass GO; shell out your hundreds of dollars. Or your hundreds and extra $1.50 if you're weak and you are already at the end of your rope, and it's worth the price to save your sanity.

You might deliberately aim for the checkout aisles that only have coolers full of energy drinks in them, if only because you can tell your kids that those are for grown-ups. You might aim for the cumbersome, awful self-check out that takes 3 times as long, but contains no impulse buy racks at all (when you're dealing with a machine as big as a smart car that gets pissy every time the scale can't detect the item that weighs .0001g, packages of gum probably create more hell for the company than it's worth to have them there).

It's a fair bet that if impulse sections disappeared from the face of the earth, we wouldn't really miss them a lot. Especially if you've got toddlers with the munchies at the store.

Should we be going so far as to try to ban them? Or restrict what they're allowed to put in them?

One mom in Michigan says: maybe. Or at least, they need some different offerings. She's created a petition to ask her local grocery store to remove junk food from their aisles and replace them with healthy food and child-appropriate literature. She believes we should all work harder to access junk food. If it's not there in our faces, we're not as likely to seek it out.

In that, I believe she's got a point. Undoubtedly, if the impulse buy section was replaced with healthier things, it would likely have a positive impact. And there'd definitely be fewer fights with the kids.

But - is it the store's responsibility to make us work harder for junk food? Or is it our own?

Do we have a right to restrict what a store sells and where it sells it in their own retail space? The answer right now is clearly no, but when faced with the big picture, which involves obesity and health risks and the link between junk food and the stimulus of the brain, should we maybe reconsider that?

Is there a public responsibility for businesses to encourage healthy eating practices and self-restriction? Or do we need to work harder at saying no?

And are we really protecting our kids if we force the businesses to change? Or are we just asking them to become partners in our raising healthier youngsters?

RELATED: 5 Mindful Practices That Will Help You Stop Overeating