Sometimes, online ads have a much bigger purpose than just making money. 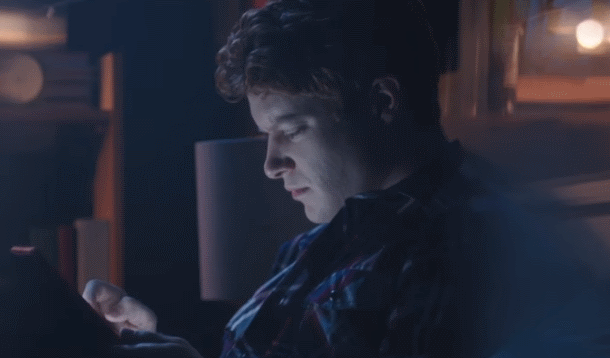 Bringing in $149 billion in business every year, online advertising is certainly a lucrative industry. But sometimes, online ads have a much bigger purpose than just making money. One such ad campaign, simply titled "Evan," has elicited a huge response due to its emotional subject matter -- gun violence -- and the shocking way in which it's delivered to viewers.

The ad first seems to center around a budding high school romance. The viewer gets absorbed in a plot involving two teens who exchange anonymous notes, and the boy's quest to find his mystery girl. They finally find each other while signing yearbooks in the gym. And then, we notice the gunman.

Having manipulated the viewer into missing the signs that were actually so clear, the ad then replays, now emphasizing the bullied, angry boy in the background as he is ignored both by the teenaged lovebirds and by the ad's audience. Scene by scene, we see his interest in gun magazines and videos, as well as his hostility towards other students. Though his actions were obvious, they were invisible -- until he took drastic action.

Sandy Hook Promise is the organization behind the ad. Founded following the tragic shooting at Sandy Hook Elementary School in Newton, CT, the nonprofit hopes to help parents, teachers, and society overall recognize the signs of potential gun violence.

Nicole Hockley, Sandy Hook Promise co-founder and managing director, says that "When you don't know what to look for, or can't recognize what you are seeing, it can be easy to miss warning signs or dismiss them as unimportant. That can lead to tragic consequences."

Hockley knows that better than most parents; she lost her son, Dylan, in the Sandy Hook shooting. She says that "it is important for us to show youth and adults that they are not helpless in protecting their community from gun violence -- these acts are preventable when you know the signs. Everyone has the power to intervene and get help. These actions can save lives."

Recent events in Utah show that attentive adults can make the difference between life and death in these situations. When two parents felt their 15-year-old son was acting strangely one morning before school, they also happened to notice that the family shotgun and a handgun were missing from the home. The parents raced to their son's school in fear; they arrived to his classroom right after he had fired a gun into the ceiling and then aimed it at his own neck. A teacher and another student managed to distract him while his parents pulled him into the hallway. Astoundingly, no one was hurt.

However, there have been dozens of incidents that didn't end so fortunately. Parents, teachers, and other students should not be blamed after such events take place. After all, hindsight is 20/20. But with increased media attention after these happenings, the idea of missing or not knowing the signs has a lot less validity. Ads like "Evan" highlight that we're still failing to recognize these red flags, and that they're there, clear as day -- if we'd only pay attention.

RELATED: A 'Wholesome' Pro-Gun Book For Children: What Do You Think?