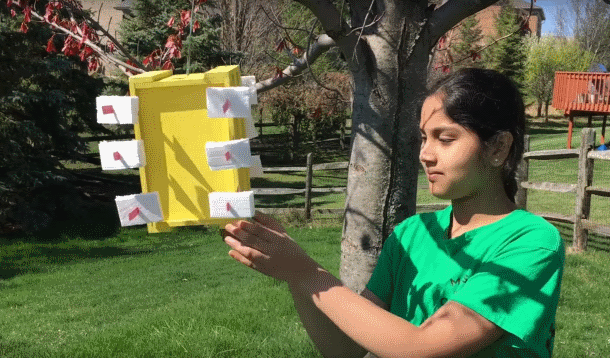 After a trip to India, where she witnessed many people living without basic access to electricity or clean water, Ohio-born Maanasa Mendu was inspired to take matters into her own hands. She's the designer and creator of a renewable energy device called HARVEST that costs just five dollars to construct and is able to convert sunlight, wind, and rain into usable energy.

As if that weren't impressive enough, here's the real kicker: Mendu is just 13 years old. She's the 2016 winner of the Discovery Education 3M Young Scientist Challenge, and has been named America's Top Young Scientist for her invention.

Mendu and nine other finalists in the challenge spent three months working on their projects with the help of a 3M mentor. Other inventions from runners-up in the competition included bioplastics made out of pumpkin seed oil, sensory feedback loops to help the brain rebuild neural connections, and energy produced from bacterial metabolic processes.

"Each year, the Discovery Education 3M Young Scientist Challenge reminds us of the inspiring ingenuity that results when we empower our youngest generation to apply science, critical thinking and creativity to solve real world problems," said Bill Goodwyn, president and CEO of Discovery Education, in a statement.

Though Mendu's HARVEST mechanism might prove useful for giving energy to people in developing nations, it could also benefit those of us looking for more sustainable resources right here in North America. Even though wind energy contributes 16 billion kWh per year to U.S. energy, that's only enough for 1.6 million of the 124.6 million households in the country.

By contrast, 83% of Canada's energy comes from zero-emission sources, and if the North American Free Trade Agreement survives into the next American presidency, more of that energy might be heading south, too. Six different projects between borders are currently in development that might increase Canadian energy exports to the U.S. by 50%, all in an effort to help meet the 32% clean energy by 2030 target put forth by the Obama administration.

"...I for one hope that the next administration, whoever that president will be, takes up where the current administration leaves off, when it comes to nurturing the North American relationship, because it matters," Sergio Marchi, the president and CEO of the Canadian Electricity Association, told USA Today. "We know that tomorrow's economy will be built on a foundation of clean sustainable growth."

Of course, if it doesn't pan out, perhaps every household could just invest in a five-dollar HARVEST machine.

RELATED: Be Prepared to Be Blown Away by These Kids’ Smarts