44 Random Acts of Kindness For My 44th Birthday

Project Pass It On 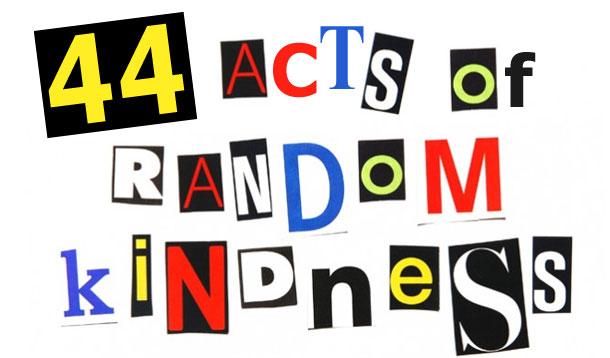 Last year I started a web site and had a few boxes of cards printed up for something called “Project Pass It On.”

The idea was that you would do a good deed for someone and give him or her the card.  They would then send in their story to the email address on the back and it would be posted on the web site blog.

A lot of people were excited about the idea and eagerly took some cards to start the process.  I mailed cards to London, England, Nova Scotia, Florida, anyone I thought who would like the idea.

There are those that are skeptical, think an agenda is being pushed, or say that this has been done before, which it has, but they were not interested.

My thought is that kindness never goes out of style and regardless if it has been done before, why can’t it be done again and again?

We seem to put kindness on our back burner at times.

A friend sent me a video about by Syed Muzamil Hasan Zaidi who performed 22 acts of kindness for his 22nd birthday.  He performed acts of kindness by planting a tree, washing car windows, delivering balloons to a local orphanage amongst other great things. You can see it here:

I watched this video and cried.  What a beautiful heart this 22 year old has.  He made such a difference in peoples lives.

I started to wonder…we always talk about what global footprint we are having on the earth with energy, pollution, garbage, noise but have we stopped to think about what our emotional footprint is on each other?

What have we done that has created a ripple, something that resonates?

How many times have we heard that when we are gone, the best thing we can leave with people is how we made them feel.  I started to wonder what my emotional footprint has been so far.

The holidays are approaching fast and once again our kids are asking for the newest latest and greatest gadget and clothes.

I watched this boy’s video and thought of the Grinch who standing on the cold mountaintop finally discovered what Christmas was about.

This video, this person I don’t even know, has ignited something inside of me.  He has inspired me.

January 29th, 2013 marks my 44th birthday and Syed Mzumil Hasan Zaidi, I am going to follow in your inspirational footsteps! For my 44th birthday, I will perform 44 acts with “Project Pass It On”.

In this season of giving, I am going to start my 44 acts of Project Pass It On and end on my birthday, which will be my gift to myself.

Category:
Give
Tags:
random acts of kindness
project pass it on
doing good for others
kindness of strangers
Carolyn Robinson

Carolyn Robinson is the author of the children's book series "The Adventures of Moxie and Chicken".  A book series that engages kids with a fun story line about her Portuguese Water Dog Moxie who is a registered child friendly and reading certified therapy dog with St John Ambulance. All stories are packed with fun as well as a hidden dose of vegetables to help teach manners and a healthy moral compass.

She has founded "Winter Wears" which donates winter clothing to inner city schools as well as starting "Project Pass It On" which is a comunity that passes on Acts of Kindness as well as "The Birthday Challenge" which challenges individuals to commit as many acts of kindness as years they are turning on their next birthday.