I Hate School Portables With the Burning Rage of 1000 Suns 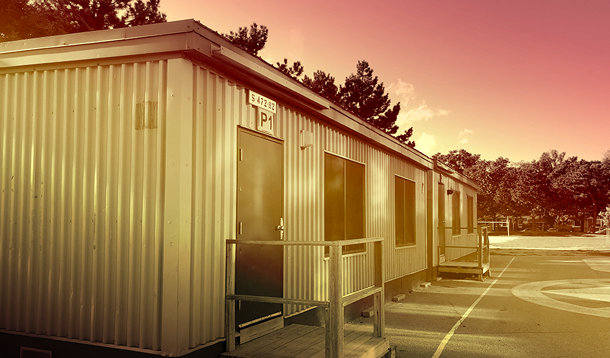 What's one of the worst parts of living in a large, fast growing community that is primarily comprised of kids?

That’s right. Portables. I can't even express how much I hate portables.

I’ll never forget when my child’s new school opened with not one, not two, not 10, but 19 portables. NINETEEN PORTABLES! The entire friggen' field at the school was filled with the darn eye sores. On behalf of every teacher who is assigned to teach in one and every kid who has to sit in one, here is my list of why you should despise portables:

Peeing in the winter must SUCK

Honestly, imagine being an eight-year-old kid who suddenly realizes, mid-class, they need to go NOW. In the school? They’d just run down the hall. Easy peasy lemon squeezy. If they’re in a portable? Go get your boots and your jacket and your hat and maybe your snow pants if it’s a real shit show out there and run out the warm portable into the FA-REEZING cold, to book it into the school to take all the crap off, to have a leisurely pee, only to have to run back out into the fridged Canadian weather to go back to class. Not only does it take way more time but man, none of that sounds fun at all.

Honestly, at least the ones at my school look like they’re WWI-era metal boxes with paint peeling and some weird foamy crap coming out a random pipe on top. They are hideous tin boxes that are no fun to look at en mass as you walk through your otherwise lovely neighbourhood.

They are a climate control nightmare

Honestly, if you’re lucky enough to have an air conditioner in your portable, you could and would and should consider yourself lucky. But as far as I understand it, when it’s hot as hell outside, portables equipped with ACs become little ice boxes and kids need sweaters so that they don’t feel like they’re going to freeze to death while it’s 115 degrees outside.

There are no lockers

Okay, so I realize not every school has lockers for young kids but my kids’ school does. I can’t tell you the doldrums my daughter was in last year when I bought her a locker mirror and all she got was a hook. It’s not that she didn’t have a locker that bummed her out. It was that, if she was in the school, she’d have a lot more room to keep her stuff than the hook she’s stuck with in her portable.

They destroy the grass

Now, fine, it’s just sod, but let me tell you – my kids’ school got rid of some of the 19 portables when a new school opened but the grass that was underneath them is beat to crap. At some point I’m sure someone somewhere will make it a priority but it’s just been a terrible eye sore for the last few years and it will likely stay that way. So while the hideousness of those particular structures are gone, the aftermath of them having been there hasn’t been.