Kids can’t learn everything without burning out, so let go of the antiquated stuff first. 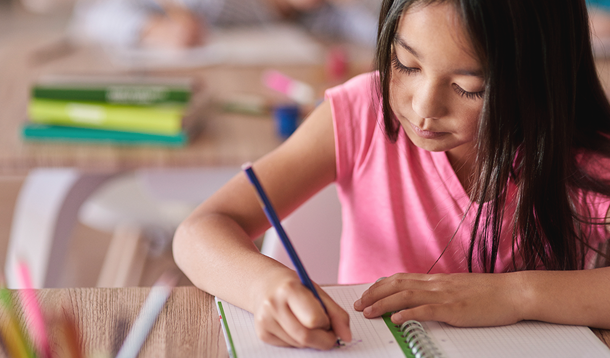 Remember learning to do your math homework on an abacus? What about taking notes with a quill and ink well? Of course, you don’t, because by the time you went to school, those things were obsolete, and it was more efficient to discard them in favour of new ways.

So why are we freaking out that our kids aren’t being taught everything we learned in school? First it was cursive writing. Some schools have dropped cursive from the curriculum, and people are losing their minds. How can children possibly exist in this world without cursive? We might as well be raising cave children.

Well, they will exist the same way most of us can’t do calligraphy. Cursive is nice but not necessary. We were taught cursive mostly to take faster shorthand. Now that we have text at our fingertips at all times, quick shorthand is much quicker with a device than with cursive. And if it absolutely must be written down by hand, kids are still learning to print.

One of the arguments I’ve seen for continuing to teach cursive is that a lot of older documents are written in it, and kids will need to know how to read cursive to decipher them. Following that argument, Latin should be part of the grade one curriculum too.

My five-year-old can read most cursive. Most of the letters are similar enough to figure out. It would take very little work to teach him to read cursive. Teaching him to write it might be more intensive, but if I really wanted him to know it, I could do it at home.

Same with learning analog time. With the recent story about some schools changing analog clocks over to digital because children are struggling to tell analog time, affecting their ability to do testing, parents everywhere are throwing their hands up in defeat. I’m sure there is a false sense of kids these days being dumber or undereducated. Or that schools are failing for not teaching them this very basic skill.

None of that is true. Yes, when we were kids we were skilled at analog time. Know what we didn’t do though? Coding. Media. Hell, the internet didn’t even exist until I was in grade seven, and at that time it was called telecommunicating. We downloaded and printed large bursts of information. “Browsing the net” didn’t come until I was well into high school. We had lots of time to learn cursive and analog time.

Like with cursive, analog time is nice to know, but it isn’t as necessary to them as the curriculum that is taking its place. There is a finite amount of time in a day; teachers need to choose what is most important, and the things that are current and most applicable to their daily lives do and should take priority.

The same people who are up in arms that children no longer learn cursive and analog in school are often the first ones to complain about children being overworked or bringing home too much homework. They can’t learn everything without burning out, so let go of the antiquated stuff first.

I vividly remember having to use microfiche in university. I thank God my children won’t have to deal with that nightmare from hell. I’m glad they have digital music instead of bulky tape decks and the heartbreak of accidentally tangling the tape on their favourite New Kids on the Block cassette.

Thank goodness they have word processors and not typewriters to use on a regular basis. I just mistyped “basis” writing this sentence. I hit backspace a few times instead of needing to retype the whole page. Progress!

My kids know analog clocks, because I taught them. They wanted to know and asked me to. I can handle teaching time. I’m glad the school is using that time for things I’m less well-versed in like media literacy and computer programming.

I’m not even outraged that they learn math using new methods. It might make helping them with homework a little harder, but things evolve, and so does education. Ask your parents about “new math” aka the math we grew up learning and they didn’t. This isn’t the first time the math curriculum has had an overhaul. And your parents did that math using a slide rule.

Let’s trust our educators that they are teaching an up-to-date curriculum and using class time efficiently. If cursive, or analog clocks, or typewriters, or abacuses are things you want your child to know, take a few minutes and teach them yourselves. Not all learning happens in school.

And while you have them there, teaching them cursive, ask them to teach you some of the things they are learning in school that you didn’t.

RELATED: Teach Cursive Writing at Home. This is Why