Gabby really wanted to present her painting to a soldier and to say “thank you” herself. 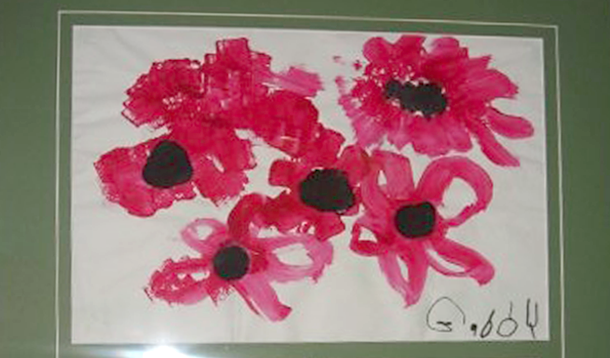 I did not think of the painting again until her Grandpa asked about it. At Christmas, my father came to visit and I related the story to him. My father told Gabby he would make sure a soldier received her painting. And boy did he deliver! 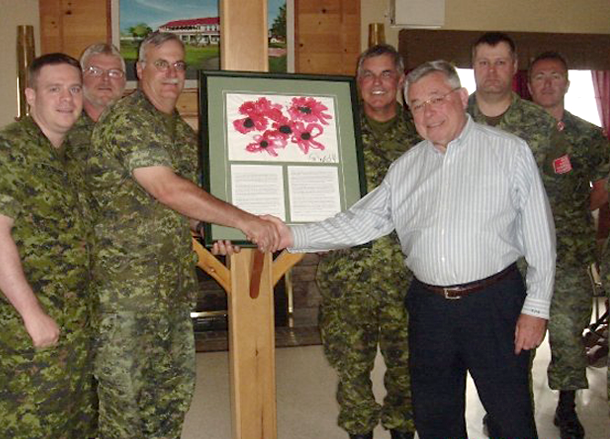 Here is the story as it appears in the framed painting.

“This watercolour of poppies was drawn by five year old Gabrielle L. From Airdrie, AB, for a Remembrance Day project at Our Lady Queen of Peace school. When the 11th November had come and gone, Gabby decided that she wanted to give the painting to a Canadian soldier to say thank you. She took it down off the wall of her school room and made her mom take her to a shopping mall to find a soldier. Gabby was absolutely convinced that the only thing keeping “bad men” from her home at night were Canadian soldiers. Her mom has no idea where this came from.

At any rate, they went to a mall near Airdrie and couldn’t find a soldier. To Gabby’s mind, veterans in full Legion gear with a rack of medals from WII or Korea were not soldiers. Soldiers wore camouflage uniforms, boots and berets.... and they were tall. The vets were understandably miffed. Gabby went home broken hearted. She made her mom promise to take her to a larger Mall in Calgary on the following weekend. At the Calgary Mall, same thing. Gabby went back home in the pick-up sniffling and holding her artwork. Her mom couldn’t console her and tried to explain that most of the soldiers were out of town on business. Gabby put the painting safely up on the wall of her room.

At Christmas when I visited, my daughter managed to convince Gabby that her grandfather (me) had something to do with soldiers and could probably get the poppies to them. Reluctantly, she went upstairs, took the painting off the wall and gave it to me, making me promise to get it to some soldiers and thank them for keeping her and her mom, dad and little sister safe at night. When I got back to Ottawa, I contacted the Commanding Officer at CRPTC Connaught, Colonel J. Cyr, and asked him if I could present this to him and members of his staff. We took a photograph and sent it back to Gabby. Her picture had finally made it.

If you are standing in CADPAT reading this, and especially if you are a soldier, Gabby from Airdrie, Alberta says “thank you!” ..... and so do I!

You have a tough job living up to the absolute trust of a five year old girl from western Canada.”

So that is the story of Gabby’s Poppies. Her painting has now been on display for many years. We may take a family trip to visit it. I think I need a picture of her in front of it.

RELATED: Thank You for Your Sacrifice

Shannon helps busy families by providing helpful honest advice on everything from travel to planning meals on Shannon's View from Here. Travel destination reviews and travel advice come from Shannon’s many years of experience of working for one of Canada’s preferred airline. Shannon also shares recipes that pass the test of being quick to prepare and pleasing to the entire family. If you are looking for ideas from all aspects of family life, you'll be able to find it at Shannon’s View from Here.