Costumish: This Halloween Costume Sucks, and Your "Apology" Does Too

We Don't Accept Your Limp Apology 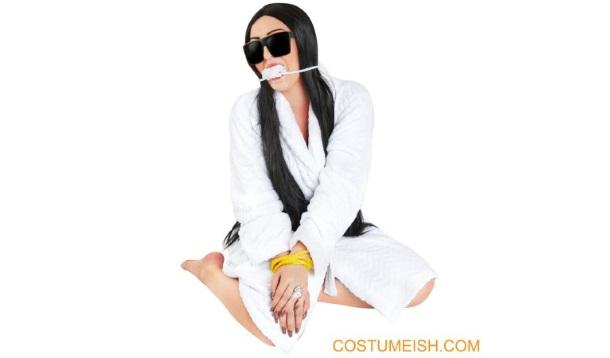 Okay, so hell has frozen over twice this month, which might actually be a sign of the apocalypse.

I already had to defend Kim and Kanye once this month over her being robbed at gunpoint and people being total dorks. Next up to bat: Costumish, the same Halloween costume retailer who got social slapped last year over over a Cecil the Lion onesie, has had to pull the "Parisian Heist Robbery Victim Kit." As if nobody knows who "Parisian Heist Robbery Victim Kit" person is supposed to be. Wink wink.

I ASSUME that it's the election shenanigans going on down south that are making people be extra-special asshole this year. I mean, if a guy running for President of the United States can rage tweet all night about nonexistant sex tapes and how he would have never sexually assaulted those women because they're "too ugly," what's a costume glorifying a woman as a victim? Practically a footnote in the shit show of society right now. Who needs reality TV these days when you can just turn on the news?

Fortunately the good people of the internet are getting sick of this shit and forced Costumish to remove it from their website. All was good in internet land. Until this:

Due to the extensive out-lash we have decided to remove the "Parisian Heist" costume from our website. We are sorry if it offended anyone.

"IF it offended anyone", they are sorry.

If the outlash was "extensive," there's no fucking IF anyone is offended about it. Way to non-apology with the best of the politicians, boyos. You were selling a costume that got your virtual peepees punched by an angry horde - second year in a row - indicating to me that at best you clearly see no problem making money off of people's misfortunes, and at worst, you're actually trying to pander to the worst society has to offer.

Sorry, is my sarcasm mic on?

I needn't go into any details why this costume is a problem, because between all the information coming out this year in the media about rape and sexual assault reporting statistics, Ghomeshi, the Stanford case, and Donald Trump (and Scott Baio - F U Chachi), all but the most diehard misogynists now are like, gee maybe society has a problem with giving women respect and protection from abuse.

Why the hell Halloween seems to be a license to sell assault of women and criminal harassment? Who the hell knows.

I don't want to hear the "it's all in fun, lighten up" defense. If you've ever been on the receiving end of stalking, sexual abuse, or spent any time looking down the barrel of a gun, it's not funny or mildly entertaining. If you defend these companies by saying "people are being so damn sensitive" ruining your fun then basically you're shitting on victims. Yep.

Whether you like Kim Kardashian or not, finding humor in her fear that she might be raped and shot is pretty despicable. The "butt-hurt" person is not the person who says "this isn't cool." It's the person showing the emotional empathy of a cockroach by thinking this is hilarious.