How To Survive The Reluctant Swimmer Phase

And How I Learned To Become A Better Parent 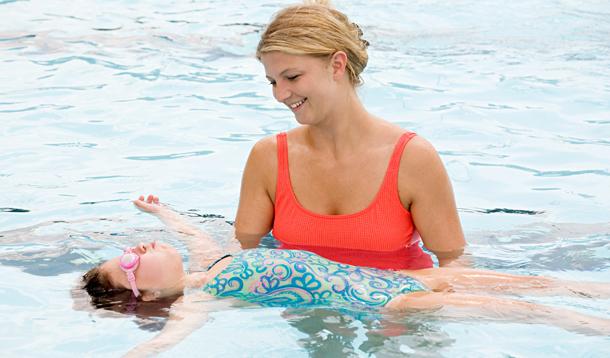 From my perch atop a gyrating elliptical machine in the gym, overlooking the indoor pool area, I have the perfect vantage point. It’s obvious. The woman hovering by the pool ten feet below me is suffering from “mom-of-reluctant-swimmer” syndrome. I recognize her symptoms: clenched fists, pleading eyes, and the inability to remain seated on the gray, wooden bleachers with the other parents happily observing their children’s swimming lessons.

It takes but a second to nail the source. Her little daughter, sporting a brand new, painfully dry, yellow one piece, is the stoic statue on deck. Arms folded, her face is shut, there’s a familiar rigid set to her jaw. As her three fully immersed classmates merrily splash about, she bolts to her mom. It’s official. There’ll be no baptizing of that suit today. I long to holler down “That was us fourteen years ago! Take heart! There’s hope!”

I can recall with crystal clarity the absolute hell of my then three year old daughter’s first set of swim lessons. On day one as the two other little girls leapt into the water with abandon, Meredith gingerly approached the edge with all the enthusiasm of a cat. While the others splashed with cheerful glee to endless rounds of “wheels on the bus,” my daughter remained bone dry, deigning to pop not a single digit into the water. Beyond frantic with worry (she’ll never learn to swim!) I resorted to bribery on day two. “Let’s choose a special cookie from the vending machine for you to eat after your class.” That worked. Once. Lesson three found Meredith jamming her toes into the depths of a crack that snaked the length of the pool deck. Arms clamped across her spindly chest, she snapped her eyes shut and demonically hissed “No cookie. NOT swimming.”

I remember little of the remaining five lessons beyond the fact they brought out a wild gambit of emotions. Frustration that she wouldn’t even get wet was quickly supplanted by pulsating anger at the relentless sight of multiple, chlorine drenched children frolicking happily, bouncing eagerly from chair to chair in the water, perfectly blowing their bubbles and dunking their faces. It seemed everybody else’s child but mine wanted to learn to swim. Anger turned to guilt. It was my fault she hated water. Where did I screw up?

Salvation (and sanity) arrived with the advent of preschool two months later. Cloakroom chats revealed the truth that I was not alone. There were other parents with children who refused to swim. Awash with relief, I learned a valuable lesson. I needed to open up more and talk with other parents about the issues I was having with my child. By doing this I gained much needed perspective (she’s three, not thirty-three), and the wonderful reassurance that we were not unique. There were others like us. Who knew?

Ever since, through countless sporting activities and school events undertaken by Meredith and her younger brother Henry, I’ve made every effort to get to know the other parents. It’s been a godsend. Mutual commiseration, shared laughs and bonding over walks, coffee and copious glasses of wine have gone a long way to making me a better mother.

How to help the mom of little miss yellow bathing suit? Perhaps I’ll have a wee word with her daughter’s swim instructor. I know her well enough - she’s my seventeen year old, once reluctant swimmer, Meredith.

Kelly Mckenzie is the widowed mom to two active teenagers. With her eldest on the cusp of getting her driver's license, Kelly is thrilled to reliquish her full time chauffeur duties to concentrate more on writing. Her writing on motherhood has appeared online on The Momoir Project and Hybrid Mom