A Great New Podcast Your Kids (And You!) Will Love 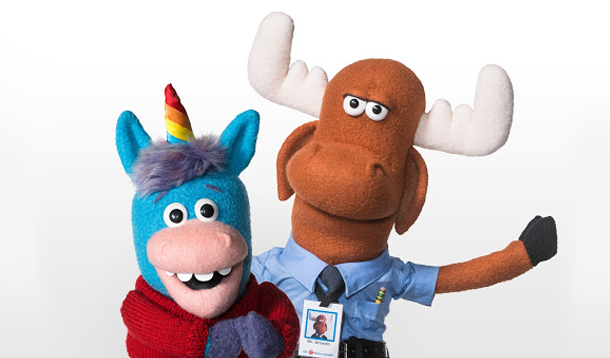 Growing up my parents always listened to talk radio. As a kid I found myself incredibly bored listening to adults natter on about things that didn’t interest me in the slightest. Fast forward a few years and now I find that I’m hooked on talk radio. Since I remember it being so boring as a kid I’ve tried to incorporate talking on the radio into my kids life in a way that engages them.

On long drives, just puttering around the house or even while getting ready for bed, it’s not uncommon to hear a podcast in the background.

There are so many podcasts that are appropriate for kids and families out there. We love all sorts of them; ones where we learn something new about the world around us, ones where we get a peek into someone else’s life but our absolute favourite type of podcasts are story telling shows.

When I heard about CBC’s new podcast called , The Story Store, I was all over it!

The Story Store can be found for free wherever you get your podcasts and is hosted by CBC’s Mr. Orlando the Moose and Gary the Unicorn.

The most unique aspect of this podcast is that kids are in the drivers seat. Mr Orlando and Gary the Unicorn both feel so strongly that kids imaginations are endless and they wanted to give kids an opportunity to tell their own stories and help bring their ideas to reality.

Children can make a free call to The Story Store hotline at 1-888-413-2781 and order their very own story. No idea is too big or too small. Simply leave your story idea and the talented team behind this podcast will fill your order by performing your story and mixing it in with silly voices and catchy music.

I had the chance to chat with Mr. Orlando and Gary the Unicorn about their new podcast and it sounds like such a great family friendly listening adventure. It’s fun and entertaining for the whole family; kids, parents, grandparents, older kids and younger kids can all enjoy it.

I asked them about their inspiration for The Story Store and they explained that they wanted to “give kids a chance to tell their story”. One of their favourite parts of the whole experience is meeting new kids and seeing where their imagination takes them.

Every episode takes listeners on a new adventure that’s piloted by kids. As a writer, I know how hard it can be to get those creative juices flowing and when I asked about their creative process they told me how easy it is because it’s really the kids wild imaginations that make this podcast a success, with the help of some very talented friends.

One of the surprises I get each episode is learning who their guest will be. Each episode they have a new guest. When I asked who their favourite guest has been so far, Mr. Orlando was quick to tell me that David St. Jacques was an amazing moment. “He’s a hero” Mr. Orlando told me. “I got to meet an astronaut and wish him a safe voyage. Gary the Unicorn giggled as he told me how starstruck Mr. Orlando became. “He’s out of this world. He’s so cool” Gary gushed.

A new guest lends their voice to each episode becoming a part of the story itself. You can hear episodes with Rick Mercer, David St. Jacques, Fred Penner and Candy Palmater. I hear there is an episode featuring Lisa Loeb coming up and that makes my inner Visco girl so excited. I asked the pair who they’d love to see as a guest on their podcast and while Mr. Orlando would love to see his cousin Neil come on the show, who sounds like a very interesting person, Gary the Unicorn was quick to shout out Shawn Mendes. There was also some mention of John Tory, Michelle and Barrack Obama and the cast of the Baroness Von Sketch show. I would listen to each one of these episodes, although Baroness Von Sketch may just be my favourite!

Each Thursday, two new episodes drop and you can get them for free wherever you access your podcasts. My favourite so far has been “The Squiggle and the Square Dance”, although “Gorillas in Space” is a close second! It’s such an original piece of work and I find myself in awe that the team at The Story store can spin such unique tales based on the ideas left by kids on their toll free line. The team can make a story out of anything “Any amount of detail will work” the pair claim. If you want to hear a story about bananas in the supermarket aisle you can call in and ask for one and they will deliver!

Mr. Orlando and Gary the Unicorn let me in on a little secret, they have some big episodes coming up! One about espionage and a security guard sounds really interesting.

Kids have such big imaginations. I love that this podcast allows them to hear their own ideas in such a big way!

Your child can hear their own ideas being told in a story filled with music, silly songs and great performers by calling in to 1-888-413-2781 and leaving a message with their story ideas. The call is free and accessing the podcast is free. The excitement your child will feel when they hear what the team over at The Story Store puts together based on their own imagination will warm your heart.

Catch up on The Story Store wherever you get your podcasts and don’t forget to get your kids to call in and order their very own story. Gary the Unicorn and Mr. Orlando are waiting to hear their fabulous story ideas.