Sharing the Story of Loss and Grieving 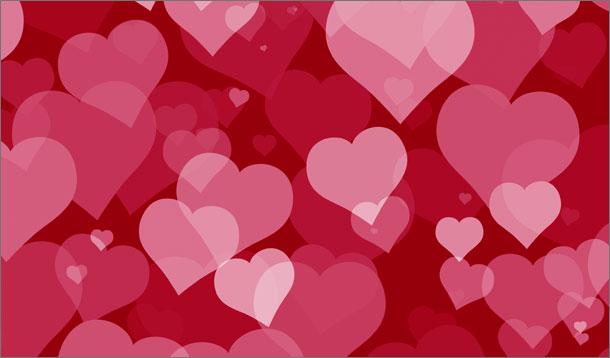 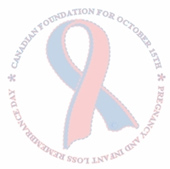 It's been awhile since I posted something. Time suddenly got away from me. With my job, and family obligations, spending the time on the computer the way I used to just isn't going to happen. I haven't gone into shaking twitter withdrawal, so I figure I'm doing fine :)

On Oct 15th, Canada and the US, (I believe other countries as well - I just don't know which ones), celebrate Infant Loss Awareness Day. I love this day. Sometimes I believe its the one day that allows people who have suffered an infant loss the okay to grieve publicly without others being totally uncomfortable. Don't get me wrong, they're still uncomfortable - just not totally uncomfortable.

Three days later, my family celebrates another anniversary. On Oct 18th, it will be 10 years since the loss of our first born. He was stillborn. The umbilical cord was wrapped around his neck three times. The percentage of the cord going around the neck that many times is very very low. Something like .05%. My husband and I used to say we were the recipients of those odds, yet the lotto still eludes us.

I remember that day. I don't know why, but this year its a little stronger. Maybe because it's been a decade?

I remember my husband telling me I was unresponsive after I delivered. The doctor stood above me trying to get my attention. And I remember the funeral. Family and friends who tried to alleviate the pain, but didn't know what to say. Some understood the need to be quiet and just be. Some needed to speak when they shouldn't have spoke at all. 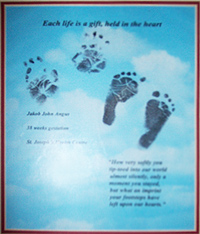 I have a photograph album of him. The nurses were wonderful and took pictures. I didn't even think of it at the time. I have a small part of the baby blanket he was buried with. They also took his hand/footprints on a piece of paper filled with clouds and blue skies. On that paper is the poem: How very softly you tip-toed into our world almost silently, only a moment you stayed, but what an imprint your footsteps have left upon our hearts. The funeral home made a baby bracelet for us. It sucks to have these baby items, but no baby to go with them.

I stayed away from babies for awhile. My nephew was born 3 months before my son - my other nephew was born 3 months after - and another nephew was born on the day 5 years later. My sister-in-law asked if we were okay. I thought that was beautiful for her to ask as she was celebrating life while we were mourning life and a future that wasn't ours anymore. That takes a special person. At first I told her not to worry - its not like she could have crossed her legs until the next day. But I told her that now this day was held an additional meaning to us.

It was a bittersweet day - one filled with remembrance of the past and hope for the future. Just last week I met a woman whom I wished I had the chance to talk with privately. I hope that her journey is filled with love and laughter and people that will understand her need to remember. Because you do remember - till the day you die.

I've met many women this past decade, who have gone through miscarriages, stillbirths and SIDS. I've cried with them, smiled with them, and laughed with them. Yes, you do laugh again. It takes time, and I remember at the beginning I didn't think I would laugh again. I tell my daughter that she knows who her guardian angel is. It's her big brother.

So, it's not a happy anniversary, but one of bitter sweetness. While I'd rather have a cheeky little boy playing at my side, I know that he is up by God's side. I have gained much by having him in my life so briefly.

To those who have recently suffered a loss - know that it does get easier. The sorrow is still there, it just changes as time goes by. Heal the way you need to. Talk as you need to.

For my angel in heaven - know that you are thought of Jakob - especially on October 18th.

Vera Orsini is a busy wife and mom. She has a special place in her heart for those who have a lost a child. She loves her own mother whole heartedly for saying she has 8 grandchildren - 7 here and 1 in heaven. Vera enjoys and treasures the time she has with her own daughter - even when said daughter makes her question her own sanity :)