I Didn't Have Sex Without Pain Until After 50

I spent years desperate to understand why my insides did not match my outsides. 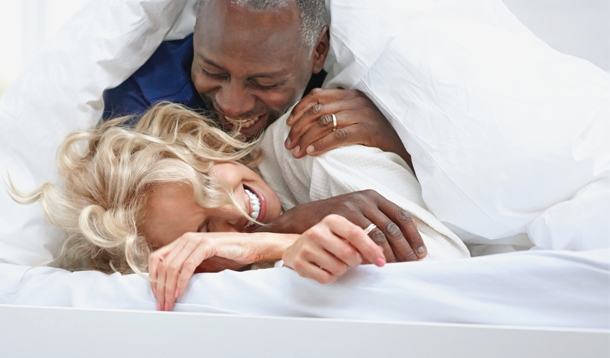 Abraham Maslow presented a paper in 1943 called The Theory of Human Motivation. In this paper, he details the motivators or needs of humans through a hierarchy, and at the bottom grounding this hierarchy is breathing, water, food, excretion, sleep, homeostasis and sex.

One could argue that procreation is the only reason for sex, for the continuation of the species. If so, then why can the act cause such pleasure or be the basis for such pain for men and for women? I cannot answer that question. I can only speak from my personal experience, and I think it’s important to talk about sex for women over age 50.

I’ve always liked sex, but physically I’d always found intercourse painful and never knew why. I can’t tell you how many times I asked my family doctor if I was somehow built differently. Each answer “no” forced me to examine the spiritual and physical sides, that maybe I had trust issues. Maybe I didn’t actually love/ like my partner. Maybe I had issues from a time I was sexually harassed (before it was a buzz phrase) at the office. Maybe I was ancestrally from a culture of frigid women.

I mean, I was desperate to understand why my insides did not match my outsides.

The proverbial nail in the coffin of my 20-year marriage was when our therapist suggested I might have successive micro-tears causing pain and that it was okay to take a break from sex. This loss of intimacy was reason enough for my then-husband to move onto a new partner, one where he felt “desired and appreciated.” His argument was flawed in many ways, but it was in motion and stayed in motion through separation, divorce, and forward.

During this hiatus, I was still in my parenting group. Our kids were older, and the focus wandered to subjects other than parenting and one member brought in a guest speaker. It was that whole empty-your-cup kind of motivational guru who also happened to be dreadlocked and male. At the end of one session, on a beautiful June day in my friend’s garden, he asked us each to go out and buy a pair of panties.

We didn’t have to bring them or show them, he said, but we had to be prepared to share the experience of the panty buying with the group. We all tittered, shifting uncomfortably in our seats.

Just as it came to my turn to speak, I had an epiphany. I said, “I had fun buying them. Then I took them home and put them away in the drawer because they are too pretty to be worn.” That summed up my sexuality then. I like it, but I won’t wear it because it’ll get dirty.

I was worried I would be criticized by myself or others.

That summer, I met a man younger than myself who was searching for a life mate to have a family with. While he waited for Ms. Right, we had a summer fling. Without any emotional ties, I learned that there are many truths about sex and my sexuality. Yes, it’s never as good as the first time. The first time is not always the best time. Yes, fatigue, trust, and self esteem all impact sex. Yes, there are many ways to have sex. Yes, mutual respect always laid the foundation for the best sex.

The summer was over just like that, and so, we decided, was the affair. I was 45 years old.

I also lied about the lack of emotional ties, I cried like a baby when we decided not to continue. I guess I can’t separate sex and emotion. Another lesson.

I dated other men with not a hint of interest in sex with them. I wasn’t ready. One fellow I dated four times over three years. He turned out to be the one. I was ready, but that’s a great story for another time. The point is that I now knew about my sexuality – emotionally and spiritually – but I was no further ahead in that physical department. I was 47 years old.

I again bothered my family doctor about my pain during intercourse and she sighed and finally referred me to a gynecology specialist. I’m not sure if she was sighing because she felt she’d already answered the question; after all, she is a doctor. I wondered, though, if she was thinking that I was too old to be worrying about – or interested in – sex.

The gynecologist’s office was filled mostly young and/ or pregnant women, which was oddly comforting. I waited twenty minutes before being ushered in to strip and don a paper gown. The doctor had my feet in the stirrups about ten seconds when he peeled off and tossed his gloves in the trash. He handed me a script and said, “In two weeks, you will feel like a new woman.”

It seems that since I finished menopause at 44, and quite possibly before that, I had a severe shortage of estrogen resulting in low muscle tone. 53 years of life. 33 years of painful intercourse. Ten seconds of diagnosis and treatment.

The doctor was right, I do feel like a new woman. Myself.

Previously published at Off the Porch.

My bliss is being little Miss Curious in all things and sharing what I find along the way. Born in Calgary, I made Ontario my home in the 80's and raised my children and now parenting a grandchild. Formerly a publicist, I found myself graduating from York at age 46 with my first degree in Social Cultural Anthropology. Always an artist, photgrapher and writer, I love blending technology and media, both traditional and modern. My themes consistently include social culture, nature, food, genealogy, adoption, costume play, art, books and arts and crafts architecture, construction and design. I own a costume business and write OffthePorch.ca I am also working collaberatively on a fictionalized historical novel. Called Drifting Soil, the novel is a series of short stories about the life, love and losses of flapper girl Jem Valentine.