Identifying Pain When Anxiety is Present

If my son tells me he’s feeling sick or something hurts, I believe him – but I want to understand the cause. 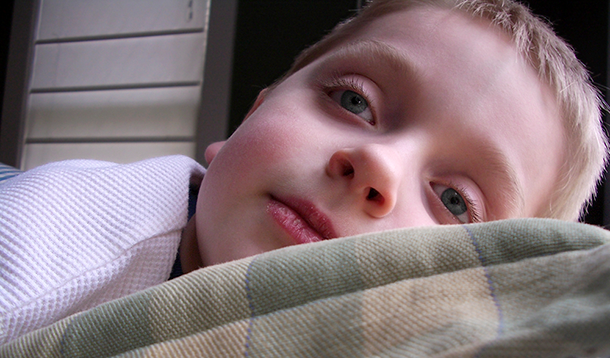 Lying on his bed with a hand on his tummy, my seven-year-old tearfully told me he felt unwell. It wasn’t the first time he’d said as much, and I had a sneaking suspicion he wanted to stay home after a weekend away from me. I sent him to school only to receive a phone call hours later that he’d been sick and I was to come pick him up in the office.

Once home, everything was fine… until bedtime, when the nausea seemed to overtake him again.

The next day, he complained he still felt poorly, so I decided to err on the side of caution and keep him home. The vomiting and diarrhea vanished almost instantly… until he went back to school.

Later, I learned there was an issue with a bully in an older grade.

Just as I feel physical manifestations of my anxiety, my son feels his acutely –  perhaps more so because he’s unable to recognize it for what it is and cope appropriately. At so young an age, it’s hard for him to articulate big feelings, and harder still for me to differentiate between a real headache and a good excuse to stay home and be snuggled when he needs a little extra love.

Identify triggers and manage them ahead of time

One of my son’s biggest triggers is associated with separation. Although he didn’t present any signs of separation anxiety as a young boy, my work and our co-parenting plan often means we go several days without seeing one another.

When a weekend apart is looming ahead, or I know I’ll be travelling for work, we make a point to concentrate on together time beforehand and plan something special for when we’re back under the same roof. This can be as simple as a movie night in the living room, or a trip to our favourite museum.

Hear them out and ask questions

If my son tells me he’s feeling sick or something hurts, I believe him – but I want to understand the cause. I quickly learned that by using the faces pain scale and asking these few simple questions can help both my son and I identify what the root of the problem is:

It’s not fool-proof (no parenting is!), but it often uncovers something more than an upset tummy.

As time progressed, the physical manifestations of my son’s anxiety began to negatively impact his ability to participate in things he loves like school, sports, and playing with his friends.

A sleepover was cancelled when he vomited at bedtime; days of class were missed when a headache or tummy ache became too great for him to bear. With the help of a counsellor, we began to uncover the reasons why my son felt anxious – which also often presented as anger – and with her guidance and a series of exercises and mindfulness practices, we alleviated his headaches and tummy distress.

Since attending counselling, he’s not missed a day of classes!

When my son is suffering with headache, tummy ache, or sore back or legs (growing pains – they’re real!), my first line of defense is a combination of ice/hot packs, children’s pain medication (ibuprofen), and a snuggle.

Don’t let it become a crutch

Research shows focusing on pain too much can actually hinder your child’s ability to lead a full and healthy life.

In the same way I need to fulfill my responsibilities as a mother and professional despite my anxiety or a sore back, my son needs to learn to cope with his pain, regardless of what has caused it.