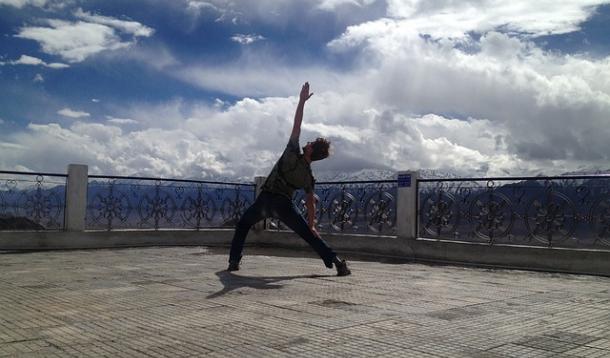 This Christmas I was laughing with some of my friends about a story that someone shared with me. Apparently, this guy bought his wife a thigh master. His wife was not the exercising type, had shown no interest in mastering her thighs and was, in general, displeased with the whole idea. It was hilarious to me. What a moron. And then I opened up my Christmas presents a few days later and found that my wife had procured me a one-month membership to a local yoga studio, OnTheMat. Let’s back up a bit.

I’m not a small man. I was once described by a manager as having “the body type of a bag of milk” and that my grandma, who I lived with in college, was “keeping the freezer stock full of Kit Kat bars.” I was an athlete in high school, but following a knee injury right before I was supposed to go play college football, things went… a little south.

I have the willpower of a dog left home alone for weeks while you’re on vacation. I once ate an entire container of Quality Street and tried to hide the evidence by stuffing the wrappers inside a seat cushion. My subtle ruse was discovered. I hold the record among my friends (although none of them have really tried to compete against me) with an astounding 28 hard shell tacos in a single sitting. I have legs that look like they belong to an 8 year-old sumo wrestler. My mother in law (before we had absolutely stunning children) suggested that if my children had my wife’s height, my legs and my head, they’d never be able to stand up.

I’ve struggled with my weight for almost 20 years. I eat when I’m upset…or when I’m happy…or when I’m awake. I’ve tried running (which was great before the kids) but once I stopped running my body said, “yeah…don’t do that again. This January my wife and I have been eating MUCH healthier, focusing on less carbs and more protein and good fats. I’ve had some of the best meals of my life and they’ve actually been the BEST meals of my life. Is it possible to make bites of cauliflower taste JUST like boneless chicken wings? No. That’s ridiculous. But is it possible to make a salmon quinoa cake that tastes like magic? Yes. Yes it is.

I have in fact, wanted to do yoga for a very long time. I’m someone who has always enjoyed meditation and through my college years, I had a lot of Indian and Asian home furnishing accents so, you know…I know a little bit about the culture. Truth be told, I didn’t know a lot about yoga except that everyone I’ve ever known who did yoga, loved yoga. So why not?

I was a little nervous about starting yoga. For a few reasons. First off, as I MAY have mentioned, I’m a bit of a large man and I often feel like I’m an imposing figure. In high school I played and coached field hockey and at one point there was a tournament with a poor turnout so boys were allowed to play…except for me…because I was apparently big and scary. I didn’t want to make the women who use yoga as their escape from big, dumb, scary men not want to go to yoga because of the big, dumb, scary man.

Second, I wasn’t sure how good I’d be at yoga. And I don’t like being bad at things in public. As one of the teachers says, “you don’t have to look pretty while you’re in practice (note: a lot of the verbiage is…gender specific. Last week I “birthed my block”) but I don’t want to look like a walrus trying to touch his left flipper to the back of his right knee.

My experience was quite different than I expected. First, the women in my classes have been accepting and encouraging. In fact, they seem downright excited that I’m taking an interest in the practice. The teachers have been incredibly helpful in helping me push myself to my limits. Not past. Just to. My background is in football and weight lifting. You know. “No pain, no gain.” But yoga doesn’t teach that. “Yoga isn’t SUPPOSED to hurt,” one of my teachers says…while she watches me try not to collapse in a heap. Yoga MIGHT hurt, but that’s not its purpose. You push yourself TO your limit and then you let your body ease into the pose.

Second, I discovered that… I don’t suck at yoga. While there are some moves that I can’t do perfectly due to the sheer dimensions of my body or my bum knee or my Osgood-Schlatter’s (Google it, it sucks) I have found increased strength, stability and focus as I’ve moved forward in my practice.

Now comes the hard part. How in the hell have I found time to go to a yoga practice every other day while taking care of my kids full time AND working on my business? How can you do that? Simple. You can’t.

You can’t “find” time. You need to “make” time. I’ve spent LESS time playing video games. I’ve spent LESS time on my phone. I’ve been productive when I can so that I can spend my time doing yoga rather than trying to catch up to my procrastination. What I’ve learned is that my wife and I need to make a schedule and unless there’s some major event (like my son chugs 6 juice boxes while I’m not looking at a birthday party and then projectile vomits 2 litres of juice onto my clothes while all of his classmates sing Happy Birthday and cut the cake) you need to stick by it. If you don’t get to watch George R.R.R.R.R Martin (yes I know, I don’t care… I blame his parents) murder another character you love or you don’t get to find out what happens to everyone’s least favourite Sherriff’s son who dresses like he’s Pharell, everything is going to be ok. Even if you find out on Facebook or Twitter, the world won’t end.

I’ve learned how to breathe in a way that supports my movement and I’ve cinched my belt one notch tighter. And this might sound a little ridiculous, but here’s the part that I love the most. You know when you’re sitting on the couch and you go to get up? Well, I used to do that in one of two ways.

Option number one involved rocking my body back and forth like I was trying to start an old, manual transmission Volkswagon Jetta until I got enough momentum to achieve liftoff. Option number two involved placing my hands on the surface I was sitting on and using all of my upper body strength to drive my body upwards. Now, I can use my legs and core to pull myself from sitting to standing and, as a fat man, I can’t begin to describe what that means.

Look, yoga probably isn’t for everyone. My wife does all the moves but can’t clear her mind if her life depended on it. My mind can become a blank slate at a moment’s notice (I fell asleep in Savasana the other day) but ask me to “hover” for longer than, say…a second, and I’ll almost pass out. But what I will say is that yoga is accessible to everyone. I’ve felt welcome, included, comfortable and powerful in an atmosphere I never thought I would.

But next year I’m buying my wife a thigh master.

RELATED: 8 of the Best Books for Making Change Happen in Your Life this Year