Are you getting quality Zzzz's? 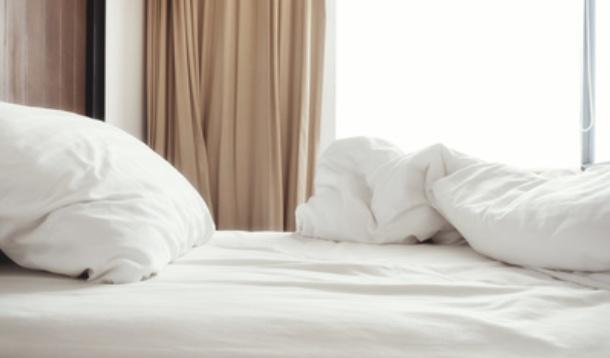 How much sleep have you been getting lately? If we were going off of statistics, I would say definitely not enough. While researchers recommend that we get a solid seven to nine hours of sleep per evening, modern life certainly does not allow for such a luxurious time frame very easily. From taking care of the kids to cooking meals to juggling a full-time job, it’s amazing that we have time to shower — let alone sleep — most days.

And really, a lot of this isn’t our fault. Way back before Thomas Edison did us a solid by inventing the first light bulb, people went to sleep a lot earlier, retiring just after dusk. And if you wanted to stay up to finish writing that text — err, love letter — to your partner or spouse, you had to burn a candle, which would eventually run out of juice.

Back then, people had an entirely different sleep schedule than we do now. Research shows that it was more common to sleep in segments instead of a solid eight hour block.

But no, this isn’t to be confused with the segmented sleep you get as a result of sleeping with your vibrating phone next to your pillow, or rising in the middle of the night because of the faint, soft, glow of your muted television.

If anything, these electronic devices are making getting a good night’s sleep all the more difficult.

Sure, technological developments have helped to make incredible strides when it comes to our health, wellness, and connectivity with the world around us. However, it’s not all screen bright-sunshine and pixelated rainbows.

Not sleeping sucks. Sleep deprivation affects our health, our emotional well-being, our relationships, and our performance both at our jobs and at home as parents. In fact, a U.S. study found that one in four workers have insomnia, and this small percentage costs the U.S. $63 billion in lost productivity each year.

And that’s not all. New studies show that sleep can even dramatically increase our appetites and slow our metabolisms, leading to unwanted weight gain and susceptibility to a number of weight-related issues.

Like a bad bedtime story, it only leads to more nightmares.

The problem has gotten so bad that Huffington Post Editor-in-Chief Arianna Huffington likened sleep deprivation to “the new smoking.”

“Remember how in the '50s we used to glamorize smoking?” Huffington said. “Now sleep deprivation is the new smoking. We need to glamorize people who are fully recharged and ready to face the world.”

Her prime example? Donald Trump. Trump, who has been hitting the U.S. primary campaign trail as heavily as his innumerable stacks of money likely weigh, claims to only sleep between 90 minutes and four hours per night. To Huffington, it’s clear that he displays all of the symptoms of a person who is chronically sleep deprived, including the “inability to process even simple information, mood swings, and anger outburst.”

And in our constantly buzzing, blinking, and connected world, the only answer to sleep deprivation conundrum is to turn off the electronics. Yes, that means your phone. And television. And tablet. And smartwatch.

While it might seem damn near impossible, it is certainly doable. While there’s absolutely no escaping technology in our day to day lives, it doesn’t have to play a role in our evening ritual. If you’re looking to escape the constant connectivity and catch some crucial Z’s, consider the following tips:

Considering that some people are already concerned about electromagnetic field exposure when cell phones are an inch away from our faces, there’s no need to keep them under our pillows while we sleep. The mere presence of your phone next to you in bed sends signals to your brain that keep you awake and preoccupied. Instead, swap your phone with some lavender. Just like babies during bath time, lavender is proven to soothe swirling thoughts and will help you drift off in no time.

It’s called a “TV room” for a reason

That’s right — this is tough love. While having a television in the bedroom can feel like an awesome way to unwind with a glass of wine after a long day, treating your bed like anything but a place for you to rest will automatically disrupt your sleep schedule. Even if you watch with the sound on low, the artificial light will interfere with your sleep cycles. Either turn the TV off at night or, even better, remove it from the bedroom to minimize the temptation for distraction.

The media decided that smoking was tacky a long time ago. In the words of Arianna Huffington, it’s time to stop glamorizing sleep and get some well-deserved shuteye.

RELATED: What's Keeping Your Teens From Getting Quality Sleep?

Category:
Wellness
Tags:
Sleep Help
insomnia
why are we sleeping so poorly now
electronics and sleep