How Do You Feel About Botox?

Erica Ehm and Sharon DeVellis go head-to-head over whether or not they'd do Botox: Which side are you on?

By: Erica Ehm and Sharon DeVellis 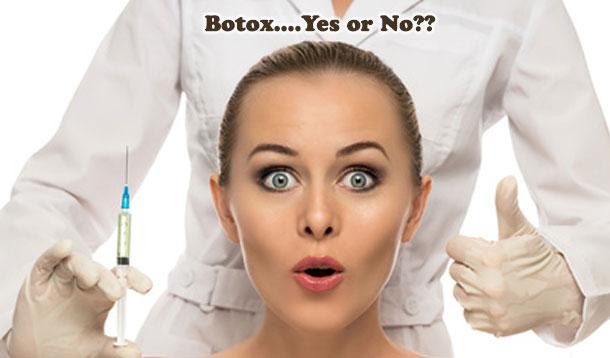 No Botox for Me

I will never do cosmetic injections.

The idea makes me queasy — not because it means inserting needles in one's face, or because you're injecting yourself with a poison. It bothers me because it preys on women's insecurities.

The message is this: getting old is bad. Old is useless. Old is ugly. Get old and you'll lose your lover, husband, partner, job. And yet, were all getting older by the second. If the anti-aging contingent can brainwash us|,they stand to make a mint. This infuriates me.

Here's what I believe. Old is wise. Old is my Beautiful Grandmother. Old has weathered the storm and lives to tell. Why erase the lines on faces that tell the stories of a life.

But here's my double standard. When I go out, makeup on, hair done, clothes just right, I swoon when old friends rave that I haven't aged since my days at MuchMusic. I know they're exaggerating; 2 kids and 20 years later has an affect on one's appearance and yet the compliments feel great. Why? Because I want to be beautiful, vital and relevant.

I guess that's why I found myself booking an appointment for an age defying injection this morning.

Shocked? So was I. Let me explain. As fate would have it, I was guest hosting on a morning television show featuring a cosmetic dermatologist. I interviewed her while she injected a woman's forehead.

After our on-camera chat, the doctor offered to give me a free injection. I explained why I had to proudly decline. Well, I don't know what happened, but for every one of my points she had a compelling counterpoint. I was being seduced.

We agreed to meet the next afternoon for a quick injection with only half the amount of botulism serum so I can test it. She assured me nobody would know our secret.

My moral compass was clearly out of whack.

Before my afternoon appointment I had booked a brunch with a couple of girlfriends, both in their late thirties. While sipping lattes, I announced that I had made an appointment to get injected that afternoon.

She went on to confess how a year earlier, while getting micro-dermabrasion, her esthetician suggested she try a cosmetic injection. So she did. What followed was months of migraines, lack of energy and deep depression. She searched online and discovered many other women with the same post-injection symptoms.

The spell was broken. What was I thinking?

I went to the bathroom and took a long look in the mirror. I earned all those smile and worry lines. I'm proud of who I am. I'm loved for who I am. I'm damn yummy. Sticking needles in my face will never make me a better person.

I always tell my daughter she's just as beautiful on the inside as she is on the outside. And so am I. Aren't you?

Why I Get Botox Every Three Months

Plastic surgery is one of those touchy subjects. It's right up there with spanking or no spanking, breastfeeding or bottle feeding. Everyone has an opinion and everyone is adamant that their opinion is right.

My opinion is this...I agree with plastic surgery if it is something that you can't do for yourself. It's a simple theory and it goes like this. I would have a nose job because there isn't anything I could ever do to change the shape of my nose (aside from having my child whack it with their head in the midst of a full temper tantrum meltdown but that's a whole other story). I'm against liposuction because if I really wanted to get rid of the fat on my ass, I could exercise more.

So that brings us to the question...and the answer is this. I Botox. I did it. I do it. I will continue to do it. I go every three months and have botulism injected into my face.

Botoxing, like most everything in my life, happened accidentally which sort of sounds like I fell onto a needle full of botox and liked the results. The reality is I went to a dermatologist to have a "funny" mole removed. While I was there, I mentioned my eye wrinkles/crow's feet.

I have good skin and I take no credit for it at all — sometimes it just boils down to the gene pool. BUT, aside from the good skin I also have huge laugh lines around my eyes (otherwise known as crow's feet and/or wrinkles) most likely from smiling and laughing so much.  Smiling and laughing are normally a good thing...that is until you hit close to 40 and realize your laughing has engraved your face. My self-consciousness about my crow's feet had reached a point where I didn't want to smile anymore. Smiling with a full blown grin and showing my teeth accentuated my crow's feet. And not smiling is a sad, sad thing. If you look at any pictures I've taken from the previous 3 to 4 years (seriously, take a look below at my bio picture), you will see I only smiled with my lips and not my whole mouth.

So while we were waiting for the freezing to take effect and get the mole removal underway, I asked the dermatogist about my crow's feet. I was really expecting an answer along the lines of "you'll need a face lift." Having a face lift is on my list of things I am not going to do in this lifetime. It falls under Point B — I will not have any plastic surgery that would require general anesthetic or my face being peeled off my skull. Call me crazy but that's where I draw the line in the sand.

His response surprised me. He said "I can get rid of those lines with some botox. I can do it right now if you'd like." And that's how my love affair with botox began.

Botox doesn't work right away. It takes about 10 to 14 days. And it was at about day 10 that I knew why so many people have had this done. The results were great. I couldn't have been happier. The laugh lines around my eyes had been erased but I could still move my face and more importantly, still had the ability to make my Mean Mummy Face when the boys were running rampant. The only negative was the cost. I'm not going to kid you, Botox is a bit on the expensive side. So how do I justify this cost? I made sacrifices. I dye my own hair (and sometimes cut it as well), I stopped buying expensive eye creams and I do my own manicures and pedicures. A large portion of my wardrobe comes from big box stores, the cheaper the better.

I'm sure most people would look at me and think I'm not the type of person to get botox. I'm not particularly careful about how I leave the house. Typically, I'm wearing yoga pants and t-shirts that are stained with the "craft of the day," food my children have thrown, dripped, crunched, drooled, spilled or wiped on me and/or fluid from some bodily function (theirs, not mine)  that I'd rather not get into. So let me be the first to tell you that there is no typical person who gets botox. I've been in the waiting room at the clinic and have seen young women, new mothers, grandmothers and everything in between. The person you'd least expect to see is the person who is having botox injections.

Would I recommend it to a friend? No, not at all. This is a personal decision. There are no creams, no sunscreens and no facial exercises that I could do to get rid of these lines. I felt self-conscious to the point that I was no longer comfortable smiling. And now that I'm doing it, I feel better about myself. Not because I'm suddenly a super model who could pass for 20 or I'm a "better" person because of botox. I'm old enough and have enough lines to know that better comes from within. I'm just trying to feel comfortable, comfortable enough to smile and not feel self-conscious, to laugh at my children's antics and not suddenly stop because I'm thinking of my crow's feet. And if a little injection every three months can help with that process. I'm all for it.

p.s. for those of you who are wondering. My funny mole was just that — a funny mole that was non-malignant.