Lululemon Should Design Clothes FOR A Woman’s Body

...instead of against them! 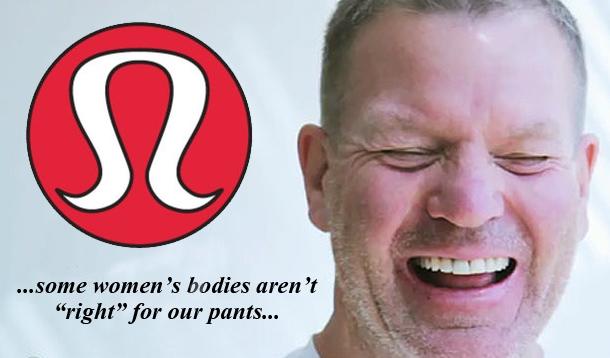 Let me start by saying that this is not just about poorly made yoga pants. This is about an issue that is much more important.

Last week, Lululemon founder Chip Wilson, made it painfully clear during a television interview that he has not invested any of his millions of dollars in a media coach. He proved this by making some pretty ignorant comments suggesting that the yoga pants that had been recalled a few months ago for being too sheer, weren’t actually flawed, but that the flaws were actually with some of the women who were trying to wear them. Chip explained that some women’s bodies just aren’t “right” for his pants.

He went on to say that even though there was a bit of a design problem, the real problem was with the pressure that occurs when women’s thighs rub against each other.

This is wrong on so many levels.

We live in a society that puts more importance on how we look than who we are, and girls are growing up believing that their self-worth is defined by their beauty and their beauty is defined by how little they weigh. We're being taught to believe that the skinniest bodies are the best bodies even though fit bodies really can come in different forms. There are kids as young as FIVE years old refusing to go to school because they feel they're too fat to fit in, and there are women in their sixties who STILL can't look at themselves in the mirror without feeling shame and self-hatred. It feels like every few months, teenagers are finding new ways to judge and torture their bodies in an effort to live up to the unrealistic images they are bombarded with on a daily basis. Most recently, it’s been the quest for the “thigh gap.” This trend has girls measuring the space between their thighs and praying that they don’t touch. Somehow, a bigger gap has become a sign of a more attractive body, and the comments made by Lululemon’s Chip Wilson just added fuel to this already blazing fire of insecurity and negative body image.

When did being “skinny” become such a status symbol, and why do we assume that the thinnest woman in the room is always the healthiest? The truth is that being fit has more to do with how our bodies work than how they look and when a company like Lululemon—who claims to encourage living a healthy lifestyle—makes comments that criticize the natural shape of a woman’s body, sends a dangerous message. Another issue is the fact that they won’t design clothes for anyone above a size 12. By making size 12 the cut off point for the clothes they carry, Lululemon is suggesting that women who wear a larger size either don't work out or shouldn't work out in their brand. The truth is that fit bodies are not one-size-fits-all, and we need to start spending less time judging our bodies and more time taking care of them.

Fit bodies are not one-size-fits-all, and we need to start spending less time judging our bodies and more time taking care of them.

Studies show that more and more girls are dropping out of sports because they don't feel that they look good enough to participate. If they continue to be shunned by "healthy lifestyle" manufacturers who believe that the size of a woman's thighs represents their fitness level, those numbers will keep dropping and our society will become sicker and sicker. I believe that Lululemon is much more interested in healthy profits than healthy consumers, and it's time we stand up and do something about it.

That’s why I’ve launched a petition with my colleague and media professor, Rebecca Hains.

We’re asking Chip Wilson to apologize for his ignorant comments and to expand his clothing line to extend past a size 12.

I am a body image advocate, author, and eating disorder survivor. I understand how difficult it can be to love our bodies the way we should and think it’s crucial that we change what has become our society’s warped image of beauty and fitness. If we continue to accept the messages telling us who we’re “supposed” to be, we’ll never appreciate who we already are. We deserve better.

Please sign and share our petition on Change.org to show your support for healthy bodies in all forms!

Marci Warhaft-Nadler is a body image advocate, eating disorder survivor and founder of the Fit vs Fiction body image workshops for schools. She blogs for The Huffington Post and is the author of “The Body Image Survival Guide for Parents: Helping Toddlers, Tweens and Teens Thrive” which gives parents the tools they need to empower their kids with the confidence they deserve. She’s got two sons who keep her on her toes and a slight addiction to tattoos.