When A Bronze Medal Means More Than Gold 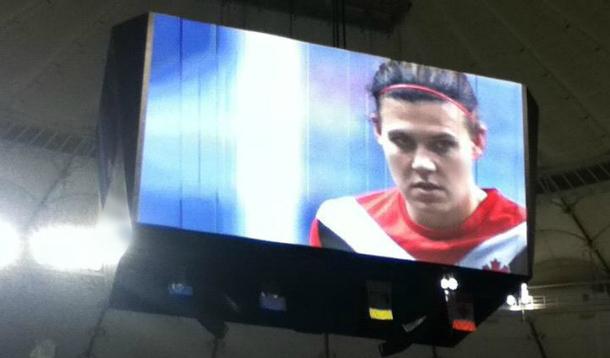 Unless you’ve been living under a rock for the past two weeks, I don’t really need to tell you that the Canadian Women’s Soccer team won a bronze medal at the 2012 Summer Olympic games in London England.

But I’m going to tell you about it anyway.

Because they actually did a lot more than just win a bronze medal.  These women showed everybody—especially girls, kids and athletes—that there’s really no point in giving up when you’ve worked so hard for something.

There’s no doubt that the match against the USA was tough. One of the toughest ones I’ve ever seen. And I think it’s fair to say that there were a lot of bad calls made by the referee. Sorry Norway, I was cursing your referee training program that day.

The team was dealt a huge blow with a devastating loss. They took a moment to themselves to come to terms with what had happened, then got up, dusted themselves off and got ready for the next game. A game which they won, and a game that earned them a spot on the Olympic podium.

Our daughter’s soccer team has a special connection with the Canadian Women’s team. One of the players, Sophie Schmidt, is from our city and trained to play soccer with the local soccer league. In November of last year, she came out to our daughter’s practice, just to kick the ball around with the girls and show them a few things.

It was beyond exciting for the girls to have Sophie at their practice with them. 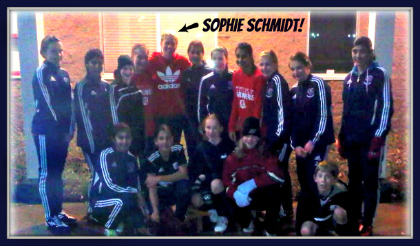 She also took time to sign some autographs for the girls, you know, on things like soccer balls, jackets, jerseys… 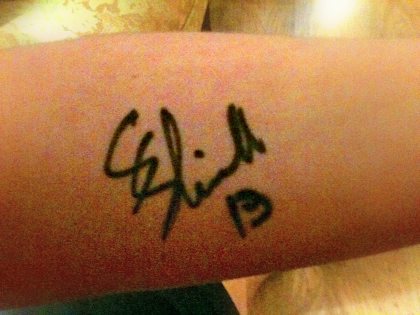 … and my daughter’s arm. Which was wrapped in saran-wrap for 2 weeks every time she had a shower.

So in January of this year, when the Canadian women’s team was about to play in CONCACAF Olympic qualifying games, our daughter’s whole team trooped out to Vancouver to see the Canadian Women’s team play. And they kicked butt. We were there when they won the deciding game that told the country that this team of incredible women was about to start training for London. For the 2012 Olympic games!

They were everything that an Olympic team should be.

And after the game was over, they came over to the stands and said hello again to the fans, including our daughter’s team. More autographs, more photos, more memories that will stay with the girls forever. 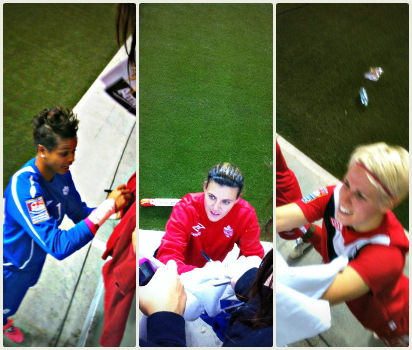 The night that the Canadian team won the bronze medal, our daughter realized something as she went to bed. She looked around her room and saw all of the things the team had autographed for her earlier this year and realized that those women who took the time to talk with her and sign her items were now Olympic medallists. The realization of how big that was really hit home with her then. Our daughter has played soccer since she was six and I think it’s safe to say that now at age 14, she has her eyes on the 2016 and 2020 Olympics.

Players like Christine Sinclair, Sophie Schmidt, and Karina Leblanc have shown our daughter that there’s no reason why she can’t.

And for that, they are gold medal heroes.