My Power Struggle With Running And Exercise

And What I Am Doing About It 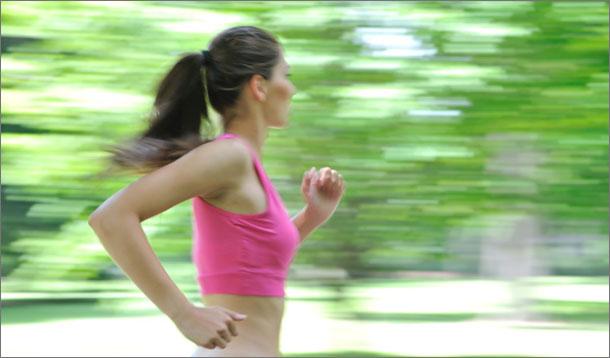 Over the past few years, I have been happy knowing that I was exercising regularly. I had gotten bored with lifting weights at the gym, and decided to go back to running after all of these years—since grade nine in high school!
I set myself up a goal to go to the 5k Easter Seal Run in Newmarket, and began running on my own. For my first real run in years, I did a 38-minute run, and even though it wasn't extremely fast, I was proud of myself. I then signed up for a clinic at the Running Room—for the 10k distance—and had a goal race to run in July, on the beaches in Toronto. I got up to training at about the 8k mark, and my knee was aching. I bought more supportive Saucony running shoes and tried to continue. The knee pain would not go away. I saw a doctor and he referred me to the Markham Stouffville Hospital for an MRI appointment. I also started going once or twice every couple of weeks for physiotherapy to help strengthen my muscles.
I was quite disappointed when I was told that I could no longer run, and that it was best to wait until the MRI appointment, which was about four months away.

I had always wanted to run a half marathon, and because I was unaware of what was wrong with my knee, I figured that if I couldn't run it, I would walk it. So, I signed myself up for a half marathon walk in Burlington, for March of 2012. I had my MRI appointment in November 2011, and was given the news that nothing was needed surgically to fix my knee. My doctor didn't really have any suggestions other than maybe I shouldn't run anymore.

I decided to sell my elliptical trainer, and bought myself a used (but fairly new) treadmill. I had signed up for a web clinic for the half marathon distance, but instead of running, I was walking. I was even alternating running with walking. I did the half marathon walk in March, and was very happy with myself—I walked it in 3 hours and 17 minutes. Yay!
At this point, I had already signed myself up for a half marathon run, for the Toronto Waterfront Scotiabank Marathon, in October 2012. I had a brilliant idea and thought—why not sign up for the Goodlife Half Marathon run in Toronto in May? So, I did the half marathon run in May and finished, but wasn't very happy with my performance. I didn't train fully and had lost a bit of interest along the way.
Based on my training efforts, I decided to sign up for a running clinic through the Running Room, in hopes that running with other people would motivate me to keep going when it got hard. That was another bust—on my end—and more out of  stubbornness than anything else. I went to the first session and the instructor was a 23-year-old kid. My thought was that if I am paying money for a running instructor, I wanted someone with more experience who has actually done a lot of runs. During our first run, I stopped and took a break, was running too fast, etc. Even though he said that between him and his mother (who was also instructing the clinic) they wouldn't leave anyone behind, no one noticed that I had stopped running, and they continued on. So, immediately that turned me off, and still to this day I haven't gone back. I know that it was a dumb decision on my part, but I was being pigheaded.
I have a half marathon run scheduled in just over a month, and have done no training whatsoever. Recently, after going to the cottage and not running for a while, I gained weight—I did not realize just how much running kept my weight in check. So, needless to say, I NEED to get off my butt and get moving again. I planned our meals for the next two weeks (I realized that all the running I had been doing was compensating for my bad food choices), so I am also going to start on a meal plan for my next grocery shopping trip to ensure that we are back to eating clean and making better food choices
Oh, and I will be getting off my butt! Wish me luck! 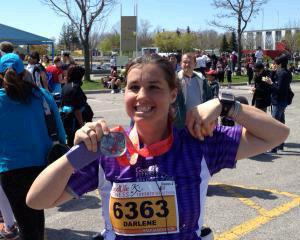 Mother of four children, happily married and resides in Newmarket, Ontario with my family.  Stay at home mom who is studying a Fundraising Management Certificate online program. Loves to cook, spend time with friends and family, gardening, reading my kobo and writing.