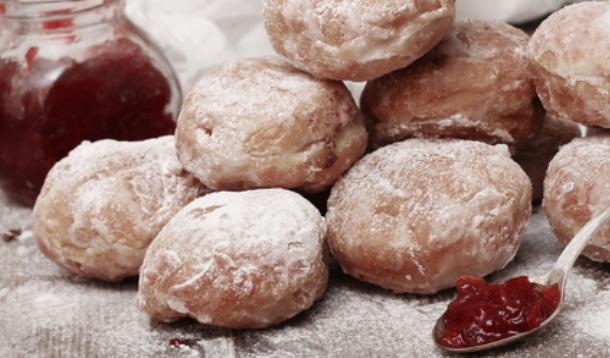 I recently discovered that the “Miracle of Chanukah” story is just a legend. You know the one I’m taking about, where Judah and his merry band of Maccabees go into the destroyed temple and discover just enough oil to keep the menorah’s candles burning for a single day. But somehow, miracle of miracles, the oil lasted for eight days and the flames of the menorah burned for eight nights. When I discovered that the long lasting oil is not really at the root of the Chanukah commemoration, I felt gutted. Kind of reminiscent of coming home for winter break in first year university to discover that I was the last one in the family to find out that our dog, Heidi, had died!

“Truth” is a word to be avoided when discussing history and religion. Since the victors of a battle often write the history, the facts of what happened in the past depend very much on whom you ask and when it comes to religion, everyone has a different truth.

Chanukah is the only major Jewish holiday not explicitly mentioned in the Torah (Judaism’s written law), since the events that inspired the holiday occurred after it was written. The Rabbis wrote about Chanukah in the Talmud (Jewish oral law and tradition), but that was written over 600 years after the Maccabees revolt. Their version of Chanukah differs markedly from The Books of Maccabees written in the 2nd century B.C.E.

So we have here two versions of the Chanukah story: one from the Book of Maccabees and the other from the Talmud. Both versions agree on the first part of the story. Around 200 B.C.E., Judea (Israel) came under control of the Syrian King, Antiochus III. He was a benevolent fellow and allowed the Jews to continue practicing their religion. Things changed drastically when his son, Antiochus IV, took over.

This evil king outlawed the Jewish religion and ordered the Jews to worship Greek gods. In 168 B.C.E., his soldiers marched into Jerusalem, exterminated thousands of people and desecrated the holy Second Temple by constructing an altar to Zeus and commanded the Jews to sacrifice a pig upon this alter.

The Jewish priest Mattathias and his five sons led a large-scale rebellion against Antiochus and his army. When Mattathias died in 166 B.C.E., his son Judah Maccabee took over. Within two years, the Jews, relying on Guerrilla warfare tactics, defeated the Syrian Greek army and drove them out of Jerusalem.

The Maccabees cleansed the Second Temple, rebuilt the altar, lit its menorah and celebrated the rededication (the word Chanukah means dedication). And thus the eight-day festival of Chanukah was born.  Why eight days? Well, here’s where the story begins to diverge. According to The Book of Maccabee II, while the Maccabees were fighting, they had missed the eight-day holiday of Sukkot, (celebrated in early fall) and so to celebrate the Second Temple rededication, they declared a “better-late-than-never” celebration of Sukkot.

Version 2, as written in the Talmud gives us this spin on the eight-day festival.  Judah Maccabee and his team, who took part in the rededication of the Second Temple, witnessed what they believed to be a miracle. Even though there was only enough oil to keep the menorah’s candles burning for a single day, the flames burned for eight nights. This wondrous event inspired the Rabbis to proclaim a yearly eight-day festival.

Rabbi Andrew Jacobs, on “Blog Shalom” explains the miracle of Chanukah this way,

“…even without the oil, Chanukah is still a miraculous story. The Maccabees were a tiny group of Jews who should not have been able to defeat the powerful Greeks. But they did!  And because of this miracle, Judaism survived and did not become consumed by Greek culture.   This story of miraculous survival repeats itself many times throughout Jewish history. Despite tremendous powers that have raged against us, nothing has stopped the Jewish people. This is a miracle.”

Although the miraculous oil story may be just a legend, I refuse to give up food fried in oil on Chanukah! To celebrate my newfound knowledge, I am going to go all out this year and celebrate Chanukah with these decadent Pomegranate Sugar-Dusted White Chocolate Doughnuts.

The idea behind these doughnuts comes from the genius mind of Chef Lynn Crawford. However, after discovering that her recipe called for a pound of butter in the doughnut dough, I decided to use her white chocolate filling and pomegranate sugar coating, but looked elsewhere for the actual doughnuts. Anna Olsen‘s recipe used only  a 1/4 pound of butter. So while these doughnuts are not exactly light fare, they are lighter than originally intended by Chef Lynn!

The pomegranate sugar and white chocolate ganache filling can be prepared a day ahead.  These are yeast raised, not cake doughnuts. The dough comes together in about 5 minutes if you have a stand mixer. Thanks to a quarter pound of butter this brioche-like dough has an amazing silky texture.

My deep fryer, which normally only gets pulled out once a year to make French fries takes all the guess work out of deep frying. You can of course use a deep pot with a candy/oil thermometer to regulate the temperature.

These babies puff up like little pillows. I cannot accurately express the joy I experienced watching my own little miracle here in the deep fryer!

Filling the doughnuts with the white chocolate ganache whipped cream is quite simple. A plain piping tip, inserted into the side of the doughnut makes easy work of the job.

These doughnuts are really best eaten the same day they are made. I sent 16 of these beauties off with my husband to share with his hockey team after I made them one Sunday afternoon. He said that they were inhaled very quickly and that they actually brought a few of these strong burly hockey players to their knees as they gushed at how good they were. 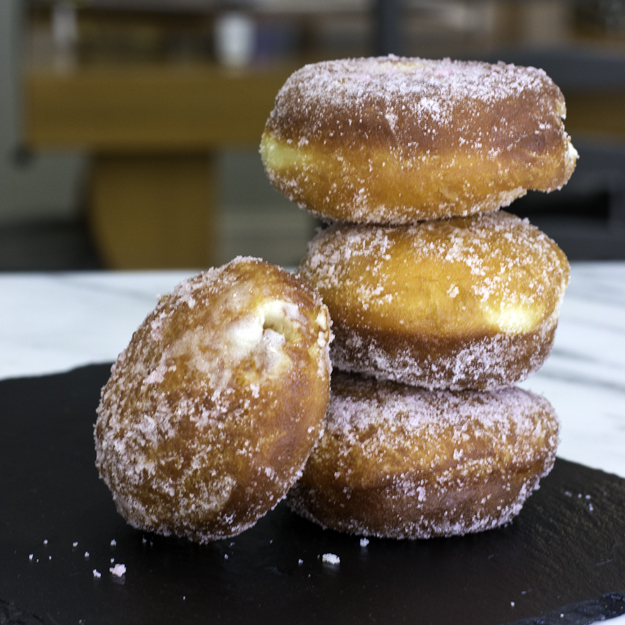 The doughnut dough recipe for these treats comes from Anna Olsen, on her Food Network Show, “Bake with Anna.” The idea of filling them with white chocolate ganache and then rolling them in pomegranate sugar comes from the genius mind of Chef Lynn Crawford! I have adapted their recipes slightly.

In a small mixing bowl combine the sugar and juice together. Spread evenly on a baking sheet and allow to dry at room temperature overnight. Pulse pomegranate sugar in food processor for about 30 seconds and store in a sealed jar.

Place the chocolate in medium sized bowl. Set on top of a pot of hot water over low heat. Mix until smooth. Remove from heat and stir in ¼ cup 35% cream in 2 batches. Set aside to cool. Whip remaining ½ cup 35% cream until stiff peaks form. Fold cream into melted chocolate. Cover and refrigerate until ready to use. Can be made a day ahead.

Add the milk, yeast, sugar and eggs to a bowl and blend slightly. Add the flour and salt and blend by hand or in a mixer fitted with the dough hook attachment. Immediately start adding the butter a bit at a time and continue to mix until the dough comes together. If using a mixer, continue to knead the dough until smooth and elastic, about 5 minutes and if mixing by hand, once the dough becomes to difficult to stir, turn it out onto a lightly floured surface and knead by hand until smooth and elastic. Place the dough into a lightly oiled bowl, cover the bowl with plastic wrap and let rise for at least 2 hours, or chill and let rise overnight.

Turn the risen dough out onto a lightly floured surface and roll it out to 1/2 inch thickness. Use a 3-inch cookie cutter to cut out 12 doughnuts, re-rolling the dough if needed. Place the doughnuts onto a parchment-lined baking tray, cover the tray with plastic wrap and let the doughnuts rise for 45 minutes, if using room temperature dough or for an hour if using a cold dough.

Pour the oil into a tabletop deep fryer (following manufacturer’s instructions) or into a large, deep pot so that it is only filled about 3 inches. Heat the oil to 350° F (use a candy thermometer if cooking doughnuts in a pot). Have a baking tray lined with paper towel, with a cooling rack placed over it. Place a doughnut onto a slotted spoon and lower gently into the oil. Fit in as many doughnuts as you can, but with enough room that they have at least an inch between them. Fry the doughnuts for about 3 minutes, then flip over the fry for another 3 minutes. Use your slotted spoon to remove the doughnuts onto the cooling rack to drain.

Fill a disposable piping bag, fitted with a medium sized plain tip, with the white chocolate cream. Place the piping bag tip in the side of the doughnut and squeeze gently to fill doughnut. Be careful not to overfill. Roll the filled donuts in the pomegranate sugar.

Cindy Feingold is a food writer and former professional cook, living, baking and creating memories for those she loves in Ottawa, Canada. She has been blogging since 2009, under the name of “Salt and Serenity.”

She tends to get cranky if she goes for more than a few days without baking. She finds that judicious amounts of salt and baking, along with a regular Iyengar yoga practice help her to stay serene. Sharing what she’s made with friends and family is just about the most generous thing she can ever imagine doing.

Her desert island food is salted caramel. She likes her chocolate like she likes her men…solid. Her favorite way to eat chocolate chip cookies is straight from the freezer.