How To Roast Peppers 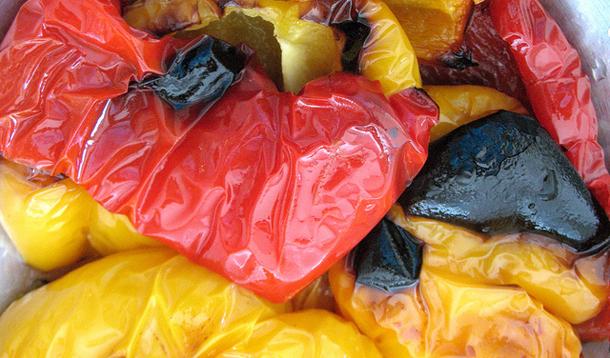 In the summer, when peppers are abundant and relatively inexpensive, it’s a great time to experiment with roasting them. Whether you have a BBQ or use your oven, both are effective ways to roast up a pepper.

Roasted Peppers are great on pizza, chopped up into a fresh salsa, in tacos, burritos, tossed into pasta dishes, whizzed up in soups or salad dressings, and more. You can roast them a bit ahead, as well, storing for about a week at a time and having them ready to toss into other dishes.

At the store, look for firm, glossy peppers that have no soft spots. You want to use red, yellow, or orange peppers to roast—green ones are not sweet enough. Actually, most sweet peppers start off green—how sweet they become depends on how long they are on the vine to ripen, and, ultimately, turn red, orange, or yellow, depending on the variety.

To roast under your broiler:

Adjust the rack in your oven to about 3-4 inches from the broiler. Turn on the broiler, so it’s good and hot.

Line a rimmed baking sheet with foil. Cut each whole pepper in half and remove the core and seeds. Make sure to remove any stickers from the skins! Rinse the interior to get out any seeds, and pat dry with paper towel. Place the peppers cut-side down on the prepared sheet, and brush the tops with olive oil. Place the pan in the oven and let cook for about 5 minutes with the oven door ajar, so that the oven won’t moderate the temperature and turn the element off.

Stay close by to watch the peppers—the skins will blister and turn black. When they are finally softened, blistered, and black enough to your liking, remove the pan from the oven. Place the peppers into a bowl while they are still hot, and cover with plastic film. Let stand for about 10 minutes undisturbed—the heat from the peppers will steam the rest, so that the skins are easy to remove once cooled.

To roast on a BBQ:

Cut the peppers in half and brush them with olive oil before adding to your grill, over medium heat. Roast skin-side down, watching carefully while they blister and the skins blacken. Remove with tongs and follow the directions above, so that you can remove the skins easily.

Once your peppers have cooled, remove them from the bowl and peel off all the skin, taking extra care to get all the blackened parts. Discard the skin. Slice the meat of the pepper into strips. You can now use them in a recipe or store them in a Mason jar, covered with a little olive oil and some peeled, sliced garlic to add a little extra flavor. They will keep in the fridge for about a week.