Can the Average Family Afford the New Canadian Food Guide? 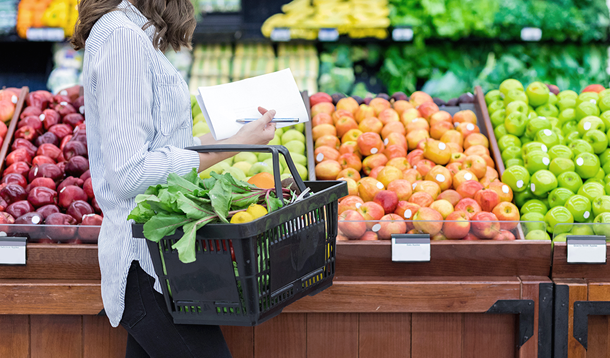 Earlier this year the Government of Canada announced its long overdue overhaul of Canada’s Food Guide. Gone is the colourful rainbow of processed foods, swapped instead with a much more attractive and wholesome looking display of whole foods, with a larger emphasis on fresh fruits and vegetables.

The changes to the food guide are welcome, with healthier options and a wonderful emphasis on eating home cooked meals, and eating around the table with family and friends. The new guide swaps out the recommendation to drink milk with your meals, and adds the new suggestion to drink water instead. There’s an overall reduction in dairy foods, although it’s still represented on the guide.

When I saw the Canada Food Guide, I felt hopeful for the positive changes it might produce in the lives of Canadians of all ages. But I also feel concerned about the rising cost of food. Can the average family even afford to eat the way our government suggests?

At the end of 2018 Canada’s food price report was forecasting that families would be spending, on average, $400 more annually on food, and $150 more on dining out. Vegetables would take the biggest hit, increasing by as much as six percent this year, with fruit increasing as much as three percent, and meat and seafood coming down in price, down by about two percent. We’re already well into 2019, and we can confirm that the report was accurate.

In my hometown of Guelph, Ontario it seems like the report was rather conservative. While shopping at one of my favourite fresh produce markets, where the produce is local and often priced conservatively, a butternut squash rang up at eight dollars (which prompted me to decline purchasing it). Although I haven’t seen squash priced quite as high since, I have been hesitant to spend the five to six dollars on winter squash this year.

I’ve also be careful with my produce purchases, watching prices and declining to pick up the more expensive items, like eight dollar grapes and six dollar celery.

It’s hard to stomach the fact that buying the cheapest box of pasta and jar of sauce will cost under five dollars, while making a meal of salmon, broccoli, and quinoa would cost nearly twenty dollars. There has to be a middle ground, because making the choice between meeting your food budget and eating well is a terrible choice to make.

I spoke with Naomi Law, Registered Holistic Nutritionist at Natural Choice Medical Clinic. Law thinks that the new Canada Food Guide is a positive upgrade from the new model, but she also believes there’s some key missing factors in the guide.

“Fresh produce is expensive and frozen food is not portrayed, when indeed it is a very nutritious option.  Just the same, dried, instead of canned, beans are much more cost efficient and provide plant powered protein,” said Law.

She also pointed out that the Canada Food Guide doesn’t emphasize the importance of healthy fats and oils, including coconut oil, avocado oil, olive oil, and even butter. These are important fats that are often lacking in the average Canadians diets, said Law. She suggests drizzling healthy oils on steamed veggies to boost nutrients and flavour too.

In our home, we’ve been exploring different grocery stores, and favouring shops with lower prices. I’ve also kept an eye on discount produce, grabbing a package of soft potatoes to roast that night, or ugly apples to turn into applesauce. We’ve also gravitated to the frozen food aisle, picking up cheap peas to bulk up meals when we need to save money, or grabbing frozen cauliflower florets to toss into soups.

It takes a bit of fresh and forward thinking to get your plate looking healthy and wholesome, like the Canada Food Guide suggests, but the implications on our health and well-being is worth the added effort.