Get Ready To Laugh Out Loud (and Enter our Lunchbox Giveaway!) 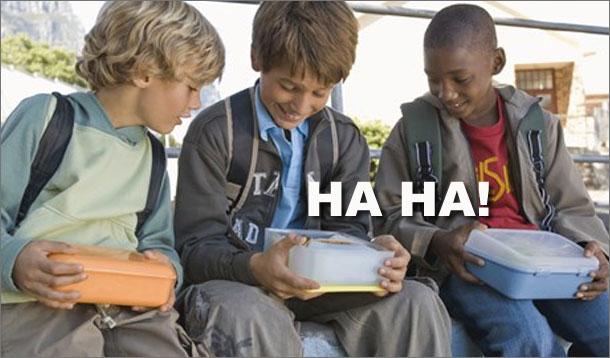 Making lunches can be a drag. We know how easy it is to get into a lunchbox lull so we asked moms across the country to confess some of the most, errr, creative lunches they’ve sent to school with their kids.
From ketchup sandwiches and a thermos filled with water, to cold pancakes and crackers found under a car seat, get ready to laugh out loud at these brave YMC members who submitted their lunch confessions.

I had spilled the last bit of juice we had on the counter when my son came in and told me he just had to have juice for his drink at school. I very carefully pushed the spilled juice off the edge of the counter and into his reusable drink container.
Candi L Ottawa, ON

I would give my daughter a hot lunch in a thermos. One day, she came home from school and asked me' "Mom, why did you give me hot water for lunch?" I nearly died with laughter. I would put hot water in the  thermos to heat it up before adding the hot food. Sure enough, the food that I heated for her was still in the microwave and her thermos was filled with water.
Victoria T Gloucester, ON

I sent my son to school with just Doritos and a small can of Pepsi and boy did I ever hear it from the school. I was in a terrible rush and my mind just wasn’t in the right place at the time. Now I make his lunches the night before so I don’t ever make that mistake again.
Tracy P Sarnia, ON

If I only have the ends of the breads left, I butter the crust side, add the meat and make the sandwich inside out. Sometimes I get away with it, others times I get busted!
Jackie R St. Catharines, ON

I gave everyone a packages of dried instant noodle soup.  They had no way to cook it and were forced to eat the noodles dry and crunchy out of the package.
Tracy M Vancouver, BC

I've actually picked up my daughter from school at lunch time, drove her to a fast food restaurant and bought lunch because I, either, didn't pick up groceries or was too rushed in the morning to do so. Not a common occurrence, mind you, but it did happen a couple of times.
Susan H Oshawa, ON

My daughter's favorite lunch came completely out of desperation! I was out of bread but didn't have any non-sandwich stuff to send. I cut up the meat and cheese, put it on kabob sticks broken in half and popped a cherry tomato on the end. She LOVED it!
Patricia S Ottawa, ON

My mom, who was visiting from another province, sent my two kids to school with a couple of Kokanee in their lunchboxes! She thought it was a store brand of coke spelled with a K. Needless to say, their teachers were not impressed!
Dawna F Nanaimo, BC

Just last week there was a tiny, tiny bit of yucky green stuff growing on the side of my "über healthy" bread... sooooo... I cut it off. The kids were super excited that I had actually cut the crust off for once!!! Win/Win and only a tiny bit of guilt!
Caroline J Ottawa, ON

I have sent my kids to school with a baggy full of cereal to snack on. They love it!
Cheryl S Hamilton, ON

If I’m feeling lazy I will buy pre-made sandwiches from the store.
Donna L Toronto, ON

Sometimes I send them to school with nachos and salsa.
Diana P Thunder Bay, ON

My son was going through a fussy phase. No matter what I put in his lunch, he wouldn't eat it. So one morning I was making his lunch (fake peanut butter and jam sandwich) and I asked him in a VERY excited voice, “Did you want square or triangle sandwiches?"  Well he got excited and yelled "TRIANGLES!"  So I cut his sandwich diagonally and he ate the whole thing!
Emma O Port Moody, BC

I had to send my son a sandwich made with two different types of bread because I only had one slice of each!
Erin L Sutton West, ON

Our dog was able to reach the lunches I had prepared for the day and took one. I was able to get the sandwich back with not too many teeth marks so I rebagged it and sent it with my son!
Susan N London, ON

I made a nice ham and cheese sandwich for lunch except I forgot to remove the wrapper off the cheese.
Simone P St. Catharines, ON

One day I was out running errands and totally forgot to pack a lunch for my son. After searching the car I found some crackers and Gerber puffs...it worked but definitely the worst lunch I've given him.
Carly H Victoria, BC

I sent my daughter to school with my lunch I had packed for work and took hers to work with me. I was laughing out loud while drinking from her juice box and eating her fruit leather.
Amberleah H Wadena, SK

I've sent them to school with no lunch at all, after checking the calendar and misreading that it was pizza day at the school that day!
Andrea S Milton, ON

I have forgotten to check the fridge and make sure there was stuff in the fridge for my boys' lunches so I would send them to school with whatever junk food I could find in the house for recess. I would then run to the store, make a healthy lunch and drop it off in time for lunch. I was SOO lucky I was a stay at home Mom at that time.
Gertrude P Chilliwack, BC

I ran out of bread and lunch meat, so I opened a can of chick peas, washed them and that was their main food.  Turns out they LOVED it!
Sandra R Ottawa, ON

When my son announced he would eat nothing but a cheese sandwich in his lunch, I let him just because it was easy.
Christine S Elkhorn, MB

I was out of everything so I sent him to school with a ketchup sandwich.
Frose E Windsor, ON

I have sent cold pancakes in their lunches.
Christina B Edmonton, AB

While driving my son to school, I have stopped at a convenience store and bought a sandwich and a piece of fruit to stuff in his lunchbox. Sometimes I have removed the plastic wrap and placed the sandwich in the reusable container.
Diane G Whitehorse, YT

I once tossed frozen cooked meatballs and pasta in ketchup. He thought he was pretty special.
Lisa B Toronto, ON

When my daughter was younger, I didn't have anything in the house that was a 'normal' lunch, so I sent her with plain spaghetti noodles, a pickle and a bag of marshmallows. At least I know she ate it all, they were all things she loved."
Nicole B Kelowna, BC 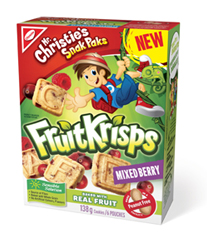 Check out How to Beat the Lunchbox Lull  for more stories by moms confessing their amusing, and sometimes embarrassing, lunchbox moments. Plus you’ll find some fresh ideas for fun lunches and tips to get your kids to eat their lunch.

Here's your chance to win a lunchbox lull pick-me-up for your family!

We're giving away a Lunchbox Prize Pack to one lucky YMC member that includes $25 spending money towards your lunch budget and a Mr. Christie’s Fruit Krisps basket of goodies!

All you have to do is leave a comment below and tell us your own Lunchbox confession!

You have until December 27, 2012 to enter. You must be a YMC member and please be sure you've registered your email address in our commenting system so we can contact you if you win.

Yummy Rules and Regs: You must be a YummyMummyClub.ca member to win. It's free and filled with perks. One comment per member. Entries accepted until December 27, 2012. Total retail value of prize is $75.00 CDN. Contest open to Canadian residents (excluding Quebec). Winners will be picked using www.random.org. No purchase necessary. See full contest rules & regulations.

This is proudly sponsored by our friends at Mr. Christie's Fruit Krisps.