To Me, It's Actually Not All Good 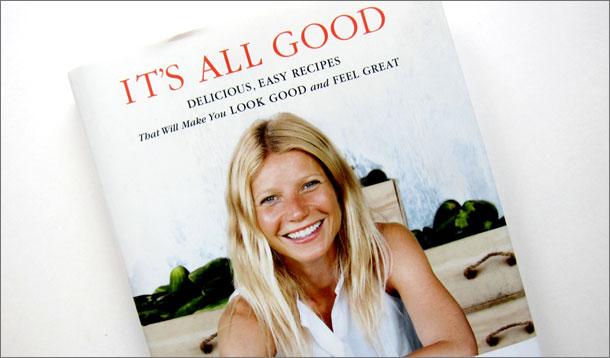 When I was asked if I wanted to look over a copy of Gwyneth Paltrow’s new book It’s All Good, I was excited. Not because I’m a fan—in fact, I know very little about Gwyneth Paltrow. I’ve watched maybe two of her movies, and I read an interview with her in an issue of Bon Appetit once. I know her children’s unusual names, but beyond that, I know nothing of the Hollywood gossip surrounding her. Truthfully, the only thing I was really interested in when it came to this book was the food.

I was excited to get the book because recently, we’ve been looking closely at my teenager’s diet. Years ago, he was diagnosed with a possible soy and corn allergy which at that point, didn’t seem to have any effect on him until the last six months, when been having far more extreme reactions to various processed foods.

As a result, we’ve taken the extreme step of removing everything from his diet that has caused reactions. He no longer eats things with soy, corn, red food dye, tartrazine, msg, and we’re very careful with dairy as he’s had a long and complicated past with it. With these changes, the amount of processed food in my kitchen has been reduced to almost nothing.

It’s All Good has been marketed as being based on an elimination diet that was prescribed to Mrs. Paltrow after she visited her doctor following a migraine and panic attack, in which she thought she was dying. The diet, with it’s extreme measures of “no coffee, no alcohol, no dairy, no sugar, no shellfish, no deep-water fish, no wheat, no soy, nothing processed at all!” made her feel so great that she had to share.

Share she does. It’s All Good is full of approximately 192 recipes (closer to 200 if you count the variations on some) and some beautiful photography, weekly menus, and notes about ingredients. At first glance, I couldn’t understand the criticism of Ms. Paltrow. Really? This looks great!

That is, until I started reading. Remember that list of things that the diet doesn’t contain? It’s not entirely accurate.  Approximately 40 of the recipes in the book (or almost 1/4) contain soy in some form. Soy milk, soy sauce, tamari, miso, straight up tofu, vegenaise, and bragg liquid aminos all are made from or contain soy. It is justified with some confusing medical speak regarding its pros and cons, then finally settles with, “ ..to boil it down I would say this. Use soy products in moderation and check the ingredients to make sure each product is not from GMO soy and does not contain toxic chemicals.”

I wanted to chuck the book off my porch. As if any of us need more labels to read and expensive products to source out. The book is absolutely NOT soy free. I felt duped.

Overall, for the average home cook, this book is overkill. To buy some of the ingredients called for is expensive, (as is the recommendation of an $500 Vitamix blender) and difficult to source, especially if one doesn’t have access to specialty grocery stores or a decent farmer’s market. For one who already is vegan and has these products in their pantry, or someone who has been prescribed an elimination diet because of medical issues or allergies, this book may be helpful for meal ideas. Once I had a relative diagnosed with ulcerative colitis, and the list of what not to eat was long and daunting. Had this book been around then, possibly she would have not felt so discouraged.

My favourite section is the basics in the very back, where there are recipes for spiced cashews, pickled jalapenos, and chimichurri that I can actually use. When sent a book to review, I often attempt to make at least two recipes from the book but in this case, the recipes were either unappealing, too expensive to source out the specialty ingredients I’ll never use again, or contained soy. Instead, I’ll pass it on to a friend whose child has a dairy allergy.

Gwyneth does make some good points; fresh and less processed is better, vegetables can be tasty, and making things from scratch can make you feel good. If one can wade through the bordering on preachy tone, you may find a recipe or two that you enjoy. As for me? Pass the farm fresh milk, wine, butter, and good chocolate.