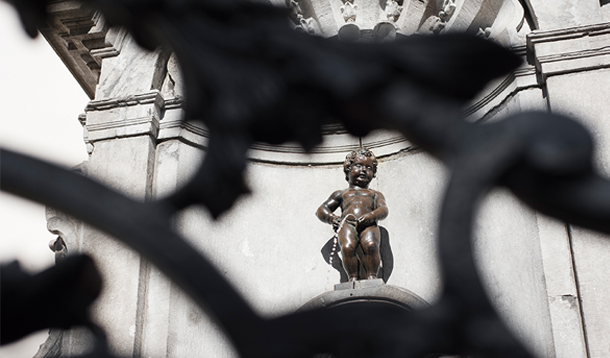 A pregnant Georgia mom faces possible jail time for something she did to her son. Jail time. It must be serious. She must have abused her three-year-old somehow, or maybe severely neglected him. Was he found wandering in traffic while she played the slots? What horrors must this mom have inflicted on this poor child to be potentially sent to jail for it?

She let him pee in a parking lot. No, I’m being serious, that’s the charge. Well, officially the charge is disorderly conduct, but I can barely type that without my fingers spontaneously combusting at the absurdity.

Brooke Johns, then thirty-four weeks pregnant, pulled into a gas station at the urgent pleas of three-year-old Cohen to use the potty. Cohen, being three, could not make it to the restroom, so Brooke allowed him to drop trou in the parking lot and relieve his poor little bursting bladder.

Little did she know that some creepy asshole was watching them, just waiting to catch a glimpse of toddler penis. According the ticket obtained by WRDW, the Richmond Country Sheriff’s Deputy stated, "She allowed her male child to urinate in the parking lot. I observed the male's genitals and the urination. Public restrooms are offered at the location."

Okay, first, it’s a peeing toddler. Stop saying, “observed the male’s genitals” like it was a sixty-five-year-old man with his junk pressed against a car window. No one – absolutely no one – is going to be traumatized by the sight of an almost-baby peeing a little. Let’s not pretend this is about exposed genitalia – in fact, it’s a little weird you were looking that closely, Deputy Sheriff.

Or maybe it was about the urine? Here’s the thing about toddlers who have to pee – they are going to. Period. Little Cohen said he really needed to pee and he meant it. Cohen was going to pee in that parking lot whether or not his pants were down.

Kids can go from not needing to pee to about to explode in minutes. There isn’t always time to get to a bathroom, get pants down, and do it the “proper” way. Sometimes, you have to get creative. I once had to grab a plastic bag I found on the floor of a fitting room for my three-year-old to pee in, because we never would have made it across the store to the bathroom in time. Then I had to carry that bag of pee through the store and find a place to dispose of it. Thank goodness this was back when plastic bags still had some heft to them.

What if we changed this story and Cohen was not an absolutely typical toddler who had to pee – what if Cohen was golden retriever? If Brooke had taken him to the same spot to relieve himself, would Deputy Sheriff of the Penis Patrol still have cited her? Of course not, because dogs pee outside all the damn time.

What if a squirrel peed there? Or a cat? Or a raccoon? Do you know how much pee covers this world? I can imagine the CSI team doing a black light test – that parking lot would light up like a rave. Why is toddler pee any different? Is there something inherently terrible about the pee that comes from human three-year-olds? Does Cohen’s pee combine with pavement to unlock a portal to the Underworld?

I’m not suggesting everyone walk around peeing, like some human sprinkler system. It’s true, no one needs to see Bob from accounting’s wang on the way through the parking lot, and toilets do exist for a reason. But if a toddler needs to pee outside – let them. And if you believe a bit of toddler pee in a parking lot is worse than jail time for a pregnant mother, then you might be the actual devil.