The Secret to Not Yelling at My Kids Was This

the anger I allowed to boil over that day was so intense... 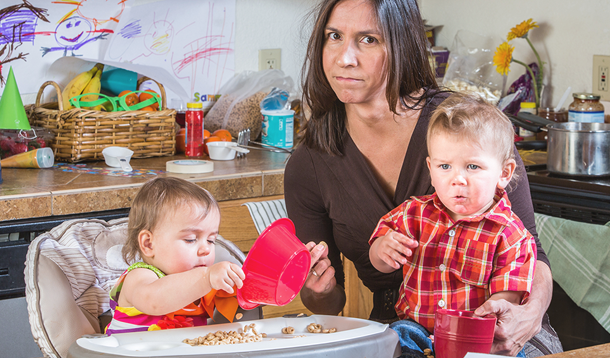 It is a parenting moment forever etched in my mind. Each time I think of it, my heart sinks and my stomach churns. Nevertheless, I want it to stay with me.

It was summer break. Seeking refuge from the heat outside, I decided we would have an indoor day. Aside from that, the day was nothing remarkable. My only plan was to get through a massive list of to-dos while my kids played. I don’t want to be the parent who always orchestrates my kids’ fun. So I shooed them off to play in the basement.

My kids weren’t exactly on board.

They wanted me. Sensing my preoccupation, both my daughter and my son started whining. A lot. It certainly felt like two steps forward and one step back. No matter what I tackled, they were undoing something. Whether they were making a mess or fighting or asking me for their umpteenth snack, I tried to carry on. I did my best to appease them with whatever they wanted so they would just let me be. They got more screen time and more sweets than I care to admit. All of it was so I could just get sh*t done.

The more I ushered them away, the more they fought, whined and complained. Despite increasing frustration, I just kept fighting them off.

That is until there was one fight too many.

I was standing in the kitchen. Both kids were on the stairs. I can’t even remember which kid pushed the other. But it was the proverbial straw that broke the camel’s back.

From the depths of my being, I yelled at my kids.

Now let’s get things straight: this was neither the first nor last time I yelled at my kids. Regrettably, I do yell from time-to-time. I lose my cool and just yell. But the anger I allowed to boil over that day was so intense that even I was taken aback.

The words, “Stop it both of you!” were louder and more shrill than anything I’d ever heard. And I was talking to my kids.

Crestfallen, my son dropped to his knees. It was as if I could see his heart breaking. My feisty daughter yelled back. “Don’t you scream! You’re mean!” With that, she started to cry too.

My little ones’ reactions were the most potent reality check I could have had. The anger washed out of me instantly as I grabbed a hold of both of them and apologized.

Slowly, it started to sink in.

Everything I had done that day had been a lead up to this moment.

There are times my kids play independently. They go outside, or play with their toys, or set something fun up in the basement. That day, I had been fighting a losing battle. My kids were craving connection with me. No matter how they tried to get my attention, I remained more focused on task completion than on them.

After that day, I read, researched, and reflected. In time, I adopted a powerful tactic to stop me from yelling at my kids.

The strategy I use to stop yelling at my kids:

I will preface it by saying that self-care is crucial. If I haven’t slept, had alone time, or eaten properly, I can’t parent well. I also have found that being present, namely leaving my phone and to-do list helps greatly when tensions are rising. But the biggest strategy that has stopped me from yelling is modelling.

In that split second just before I would yell, I take a deep breath. Then, I say as calmly as possible how I’m feeling. Simply, all it is is doing exactly what I wish they would do when they’re melting down. Except I’m doing it myself.

What this looks like: Often, I use phrasing like, “I’m disappointed that you chose to hurt your brother.”

Other times, I say, “I’m feeling frustrated that you’re not listening.” Or, “All of the whining is making me feel really angry.”

The modelling goes further than that, though.

Not only do I identify why I feel as though my blood is about to boil, I also tell my kids how I’m going to calm down.

I will say, “I’m going to deep breathe and count down from five.”

Or, “I need space right now. I’m going to stand over here for a moment and then, I’ll be back to talk to you.”

Why I love this strategy to stop yelling at my kids:

This hasn’t been a magic ‘cure’ but it has helped so much.

It’s still a work in progress. I do still raise my voice. And so, I apologize and explain I’ll try to do better next time just as I would like them to do when they act similarly.

It isn’t a perfect solution, but it is effective and impactful.

Previously published at Parenting From The Heart Blog.

RELATED: When You Need Help Calming Down When Your Kids Are Ramping Up

When Alana Pace isn't nursing cold, stale coffee, she can be found with her baby on her hip, barefoot, and racing after her two preschoolers. Thanks to a background in psychology and a free-range childhood backing onto an expansive evergreen forest, positive parenting and play-based learning are almost instinctive to her. Follow along with her on Facebook or subscribe to her newsletter to get great ideas on these two topics!