The Year My Toddler Spent Dropping the F-Bomb

I remember the exact day The Year of ‘The F*cken’ began... 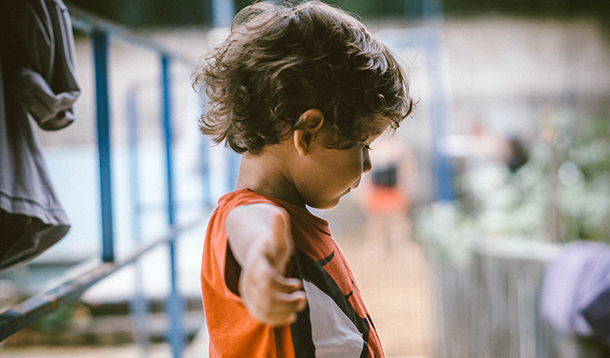 When my youngest son was three, he spent an entire year calling me a “f*cken” whenever he was mad.

He came by it honestly. I have a bit of a potty mouth myself, but clearly I didn’t realize how much he was actually taking in when I dropped the occasional F-bomb.

It turns out, quite a lot.

I remember the exact day "The Year of the F*cken" began. It was warm and sunny, which must have lulled me into a false sense of hope that this particular grocery shopping trip would end in success (or at least not a meltdown – his or mine).

It wasn’t his fault, really. While my older son was always content just sitting and hanging out, this tiny, pint-sized Tasmanian devil wasn’t happy unless he was full-throttling it from 0 to 60 every waking second. To be trapped in a shopping cart for 45 minutes while I bought awful things like vegetables and non-sugary cereals wasn't conducive to his move and groove lifestyle.

Things were going okay until we hit the checkout. Only three lanes were open that day, and each one was lined four deep with other exhausted parents. Mr. McMoveAlot was getting antsy, wanting out of the cart, when he noticed the chocolate bars within reach. He tried to grab, I terminated the grab and that’s when the veritable sh*t hit the fan.

“I hate you, you f*cken,” he screamed at the top of his lungs, his face turning red with effort. You could almost hear necks snap as shoppers and cashiers whipped around to look at me.

He continued on, “You’re a f*cken! A F*CKEN!!!” spittle flying from his mouth.

While the mother in me was mortified, the writer in me wanted to know, a f*cken what?

Had we known it wasn’t a one-off thing we might not have laughed so hard. In the grocery store, playing at the park, during storytime at the library, and once while he was being examined by our family doctor (although I’d like to think that one was directed at her), 2007 was the year I was sworn at in every place imaginable.

Did I learn my lesson about swearing?

F*ck, ya! I learned to whisper it so he couldn’t hear.

Photo by Bruno Nascimento on Unsplash

Jimmy Kimmel Asks Kids, "Do You Know Any Naughty Words?"

Why I Let My Kids Watch Sex Scenes In Movies

I Won't Teach My Kids That Swearing is Wrong

Leslie Kennedy Reflux: The Hell on Earth Too Many Babies (and Parents) Know About