How To Get Your Teens To Stop Swearing

The Secret is Not To Eliminate Them 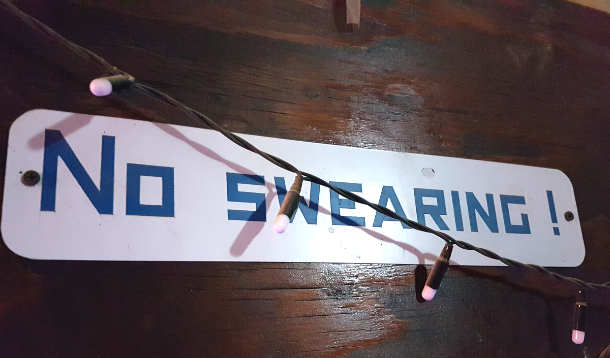 The following excerpt is from Mona Andrei’s latest book, SUPERWOMAN: A Funny and Reflective Look at Single Motherhood.

I don’t know about your household, but in my house, it happened overnight. One day my kids were all sweet and polite with dimples and no sign of hormones anywhere. The next day I was dealing with attitude and multiple trips to the store for pimple cream. The day after that, my teens had taken to swearing when I was in another room. They thought I couldn’t hear them, but what they didn’t realize was that as their mom, I hear everything. If your kids are on the brink of Tasmanian-teenage hell, you know what I’m talking about. It’s just one of the many symptoms of being a parent, and it goes something like this:

It’s also the reason why people all over the world refer to parents, especially single mothers, as “demi-gods.” (So I’ve heard.) So how did I react when my teenagers started swearing behind my back? I ignored it. Why? Because many years ago, I learned another important life skill: picking my battles. At the time, my oldest daughter was going through the terrible twos and having a meltdown in aisle 4. She wanted Cocoa Puffs, and I had made the fatal mistake of saying no. Enter the wrath of a two-year-old. I still shiver in horror at the sight of a box of Cocoa Puffs.

Then when that same toddler morphed overnight into a teenager on the verge of developing bad language habits, I learned not to cringe, neither internally nor externally, and to hold my face in place when walking into a room after profanities had been flung about with F-bombs still sticking to the walls like a spaghetti dinner gone wrong. This type of composure takes practice.

Also, I may have unconsciously programmed my brain to automatically bleep out all words that begin with the letters b, f, and sh. And let’s not forget that I, too, was a teenager at their age. Just the fact that they were using such words “behind my back” meant that there was still hope. It made me feel like maybe—just maybe—I still had some clout. If nothing, I’m hopeful.

One of the saddest aspects of being a parent to sweet children is that they eventually do morph into teenagers. That’s when things get tricky. Those same sweet children start coming home with new ideas, opinions . . . words. Suddenly, snuggling under a blanket and watching a Disney movie together isn’t “their thing.” They want to watch YouTubers pull practical jokes on their dogs, and they want to do it by themselves—in their room with the door closed. (This is a sign that they do not want to be bothered. But feel free to come get them when FOOD.)

And of course, they will test us. That’s what teens do, and that’s why we have them—so that we can excel at passing these tests. It’s our rite of passage into adulthood. Don’t say you heard it from me, but teenagers are our very own personal incentive for growing up. But all is well. I have my black belt in parenting, and I’m about to share a secret with you. It’s a method I developed years ago when my teens had just crossed the threshold into who-are-you-and-what-have-you-done-with-my-angels. It’s a proven two-step process for getting your teens to stop using those b and f and sh words.
The way I see it, swear words are a healthy part of a balanced vocabulary. They help us cope with frustrating situations, and they alleviate stress. I haven’t actually found scientific proof of this yet, except that it’s a tested theory. Tested in my own life situations. And since we all want our teens to grow into healthy adults, the secret is not to eliminate swear words but to replace them.

Here’s how this two-step process works:

I know what you’re thinking: It sounds too simple. This can’t possibly work. Trust me. It does. And to help get you started, here’s a list of suggested replacement words. (Let’s see if you can figure out the original phrases.)

What the what?
Cheese n’ rice!
Stop talking junk!

You can also use one word to replace all swear words. Here are some examples using the word “fish”:

*Use of the exclamation mark is optional but highly recommended. It’s the sprinkled-on spice of badass I mentioned earlier.

As a mother, you can imagine how proud I am when I’m reading quietly on the living room couch, or folding towels in the laundry room, and I hear my teens yelling “go fish yourself!” or “get out of my fishen’ room!”

It really is quite endearing. And just another small win on the parenting frontline.

In conclusion, parenting teens is not easy. It’s not easy today, it wasn’t easy for our parents, and it wasn’t easy during the King Tut era. But if you can go into your teenager’s psyche and master these simple raising-teenager life hacks, you may even be able to cut down on your wine consumption. Except why would you even want to do that? Wine is cheaper than therapy.