Your Tween is Probably Ready for More Independence Than You Think 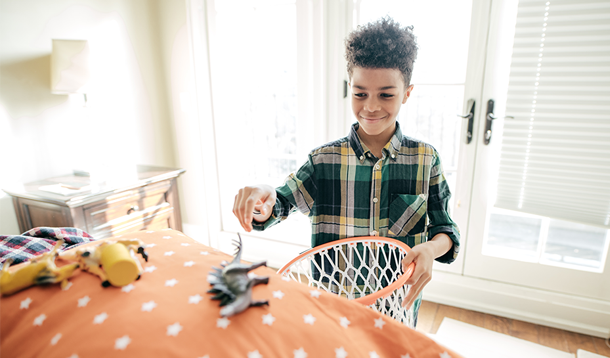 I tried an experiment yesterday. I asked my ten-year-old if he wanted to be in charge of my six-year-old for the afternoon. I was upstairs if they needed anything, and if I’m being honest, I was tired and I wanted a break, so I figured this was a win-win situation. My kids usually begin fighting from the moment they open their eyes in the morning, so I didn’t think this experiment was going to last long - but I was willing to try it, and he was eager to take me up on my offer.

I had underestimated him. Not only did they play nicely together, with one child clearly in charge of the other, but my ten-year-old took it upon himself to make both of them dinner, and even taught his little brother a life-lesson. He had met and exceeded the expectations I had of him.

This experiment showed me that maybe my tween is ready to take on more independence, and made me feel a little more secure with the idea of doing so – but it’s still hard to know if he is ready and for what.

By the time I was his age, I was staying home alone for short periods. I was going to the swimming pool alone with friends. I was certainly hanging out alone while my parents were asleep or otherwise occupied. But my son is not me. At his age, I was freakishly responsible. I was an idyllic tween and teen, never getting into trouble, never taking foolish risks, and never breaking the rules. I probably could have been trusted as a CIA agent, never mind spending a few hours alone.

This is not the case with my impulsive ten-year-old. We regularly find that he has snuck food, or snuck games on a device he wasn’t allowed access to, or snuck other things he knew weren’t allowed. He has ADHD, which can sometimes make him act before thinking. He often requires reminders to behave appropriately (such as not jumping off his bed in an unsafe manner). Could we trust him to make good decisions without us there to follow up?

On the other hand, how will he ever be ready if we don’t give him opportunities to learn how? It’s a catch-22 that has plagued me since he hit double-digits. To mitigate this, I’ve been trying to give him little chances to both learn and prove his independence. It started when he was a few years younger, allowing him to use a public washroom with me standing right outside the door. I’m not proud to admit that these early days included a lot of shouts into the men’s washroom from this nervous mom. Sorry to any grown men I startled with my, “Are you okay in there???”

Over the summer, I took him to a public swim, and allowed him to change in the men’s change room while I changed in the women’s, instead of us both using the family change room. I have never gotten into a swimsuit so fast in my life, but he handled it like a pro. At swimming lessons now, he navigates the change room without us problem-free.

The first time we allowed him to go inside the rec centre to use the washroom while we stayed outside at the park had my stomach in my throat, but he was unphased. He loves going into the pizza place to get ready-to-eat pizzas while we wait in the car out front, and even managed a toy store at the mall while I sat on a bench near the entrance.

We have now reached the point where the next logical step is to allow him to start staying at home for a few minutes while we run quick errands – but I just don’t know how to tell if he is ready. Perhaps it’s more that I can’t tell if I’m ready, or how to tell the difference between his readiness and mine.

I’m logical enough to not fall for the popular misconception that the world is more dangerous now than when we were young. Facts show it’s safer. He’s old enough that nosy do-gooders wouldn’t panic and call the cops if they found out he was home alone, which is a more likely scenario for parents allowing their children independence than actual harm. But still, the hesitation persists.

I suppose we will just know when the time is right, and when the time comes, it will be scary for us and exciting for him, just like all of the other milestones he has reached along the way. I know that we can’t keep our children on a leash forever, and I am preparing for their independence, as uncomfortable as the thought may be.

In the meantime, maybe we will do more afternoons where he is in charge. Even if it doesn’t make me feel better about letting go bit by bit, at least I’ll get a nap.