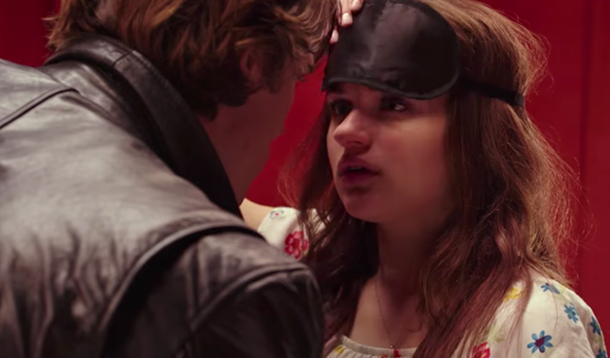 In May of this year, Netflix released The Kissing Booth, a teen romantic comedy, and everywhere I turned, I would hear about it.

The movie has an interesting backstory. It was based off of a book written by then-teen writer Beth Reekles on Wattpad, a social network for writers.

Last month I had an evening to myself and remembered all the talk about this 'must-see movie.' I started The Kissing Booth with minimal knowledge beyond teens were losing it over this movie, and adults found it completely nostalgic.

I watched in horror for 110 minutes, completely shocked by the gross sexism and misogyny on display.

In the last year, we’ve seen such compelling and raved-about teen movies, like Love, Simon, Lady Bird, and Wonder. The Kissing Booth doesn’t remotely compare to these films, but somehow it’s one of the most watched movies on Netflix.

The movie follows Elle Evans (played by Joey King), and her best friend Lee Flynn (Joel Courtney), who have done everything together since they were born. That all changes when Elle breaks one of their most important friendship rules, and falls for Lee’s older brother, Flynn (Jacob Elordi).

It sounds like a typical shallow teen rom-com, and in a lot of ways it is. Watching this film for pure pleasure would make for a decent night, but as a parent it’s hard for me to turn off my discernment when watching movies that teens and preteens are fawning over.

The most difficult aspect of this love story was the dysfunction between these three people. There are plenty of problematic interactions that qualify for a second take. In one scene, Elle gets extremely drunk while her 'best friend' does nothing. The older guy that Elle falls for has issues with violence, but apparently that’s just “how he was wired.” Flynn beats people up when they don’t do what he wants, and he treats women like throw away trash.

The entire film is based off of secrecy and sneaking around, both Elle and Flynn having a dreamy romance complete with sex behind the Hollywood sign. There’s no talk about condoms in the heat of the moment, although we do see Elle buying condoms later.

It is the portrayal of Elle as the woman who saves the day that feels the most problematic for a teen audience. A lot of the ownership and responsibility sits on the shoulders of this young teen girl. Elle feels responsible for Lee’s lashing out when he ultimately discovers her relationship with Flynn. She is the one physically holding Flynn back when he can’t seem to control his anger.

Elle is the one taking ownership and seeking forgiveness from Lee, over and over again.

There is one scene with Elle with the boys’ mom (played by teen movie queen Molly Ringwald) that really had me shaking my head. In the scene Molly tells Elle that she needs to make things right with her son, putting the responsibility on the shoulders of the teen girl, instead of the teen boys who don’t seem to require any effort in this situation.

I know I’m not the only one with issues with this movie. The film has a thirteen percent critics approval rating on Rotten Tomatoes, with reviews calling it lazy, sexist, troubling, and unsettling.

On the other side of Rotten Tomatoes we see the viewer reviews, which we know are mostly teens, and here we see a seventy percent approval rating.

I know a single movie isn’t going to shape the way that teens view sexuality and teen dating relationships, but when I see a movie like this resonating so much with young viewers it makes me wonder why.

Teens may fall for the romanticism of The Kissing Booth, but I hope parents also take the time to watch. This movie could lead to important conversations about teen dating, violence, and responsibility. I don’t think that we need to censor this film, although it baffles me that the movie was made in the first place.

I do not recommend The Kissing Booth, but I do believe it contains valuable lessons about how not to treat women, and that is why I think it’s worthwhile to watch.