Go Forth, Kids, and Get It Done 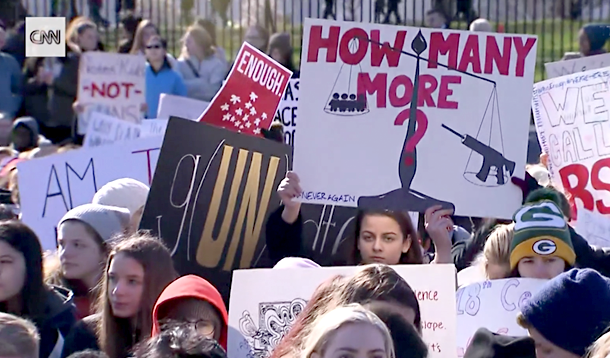 On March 14th, the kids took over. For 17 minutes, primarily across the United States, students from elementary schools through high schools stopped, stood up, and walked out of their school to literally protest for their lives.

Tired of waiting for change, these kids took it upon themselves to plan and carry out a nation-wide demonstration in demand of better gun control laws. While the gesture was grand, it was not done in a vacuum, nor was it one-and-done display. The walk out was part of a growing movement by kids holding the government to task and speaking out as activists.

The kids are taking the initiative and we are following their lead. As one Twitter user responded to claims the walk out was an attempt by the Left to organize children, “Oh, sweetie. It’s worse than that. Your children are organizing the Left.”

Students sparing 17 minutes of their education to honour their peers lost to the Parkland massacre, and to protest in an attempt not to be next, seems like an obvious thing to support. Kids have lost 17 minutes of education to less. Skip one pointless assembly and they could get that time back three-fold. But the walk out was met with a good deal of criticism. As expected, those who are pro-NRA or anti-gun control were vocal against the protest; but surprisingly, so were many school administrations.

While some schools helped their students organize their walk out, including an elementary school in Park Slope, New York, who received whooping applause by neighbouring high school students as they marched past with their signs, other schools discouraged the protest, and threatened consequences for those who participated.

One student in Arkansas faced corporal punishment. When Wylie Greer and a peer were approached by their principal while sitting outside the school in protest, they indicated they knew they would face consequences if they did not return inside. They chose to stay and accept their fate.

Wylie was given the choice of two days of in-school suspension or two swats with a wooden paddle. He chose to be hit. “In my mind, the in-school suspension was essentially conceding to sitting down and shutting up, which is what they wanted to happen, to keep it quiet almost,” said Wylie.  “I felt if I stood up and took the punishment in an honourable way, that it was better than doing what they wanted me to do which is shut up and go on with our lives.”

They are not naïve. They know exactly what they are doing and why. They are speaking out with more intelligence than any adult. They are not pawns. These kids have fire in their bellies. They are the ones with targets on their backs, and they do not need to be manipulated to fight to remove them. This is their movement.

And I watched them in awe. I watched as they made clever and impactful signs; as they delivered intelligent and passionate speeches; and as they stood up to adults in power, demanding to be heard. I watched them effect change.

My message to my children, the ones I am raising, and the ones I support from afar, is this: I will always have your back when you stand up for what is right. I will stand by you as you learn that some things are worth consequences, and that life is not always fair. I will listen to your voices. I will hand you the megaphone.

I will stand with you. I will walk behind you. I believe in you. I trust you. You are strong, you are smart, and you are capable of fighting for your rights, particularly your right to safety.

Go forth, get shit done. You got this.