Cutting Bangs Became a Discussion About Self Confidence

It’s hard, being mom to a pre-pubescent girl. 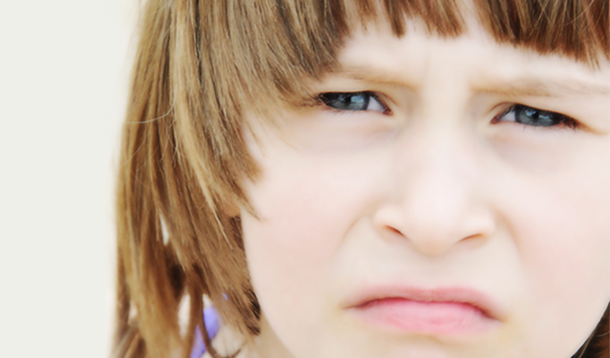 My eight-year-old daughter had bangs until she was seven. I remember getting them trimmed the day before we got family portraits done, and when I blew up the image to an absurdly large size, I thought there was a flaw in the image. I noticed a tiny speck above her eyebrow and assumed it was dirt. It was, in actuality, a teeny tiny beauty mark that I had never noticed before on my own child!

It is that small a beauty mark.

About a year ago, she asked to grow out her bangs. She wanted to look more grown up.

Imagine my surprise when, a few weeks ago, I noticed a big chunk of the top layer of her hair had been cut, about two inches sticking out screaming ‘a child cut this hair.’ I asked her why she did it, and she started crying.

“The kids in class,” she told me, “are making fun of my beauty mark.” She wanted bangs again, to cover it up. She tried to cut them herself.

My heart broke into a million pieces and I stood there, in a parenting abyss of uncertainty about whether or not to take her to the hair dresser to cut her bangs properly. I want her to feel good about herself and confident, I want her to be free to do whatever she wants to do, but I also want to help guide her to make decisions for the right reasons. It's a constant battle trying to figure out how and when to give her the green light to change her appearance and getting to the root of why she wants to do what she wants to do.

It’s hard, being mom to a pre-pubescent girl. Her body isn’t changing yet, but her brain is maturing and learning and processing and feeling and experiencing. I had no issues with cutting bangs, if that’s what she wants. I do, however, not want to raise a girl who changes her appearance to appease the people who make fun of it.

I want to raise my girl to be proud about everything about herself - both her strengths and her perceived imperfections.

Should I have let her cut her bangs, if it made her more comfortable? I encourage her to dress how she wants (within reason), and to wear her hair how she wants and to read what she wants. I want her to have a strong sense of control over who she is as she navigates maturing into a woman. But I need to help guide her, as best I can, to separate what she wants from what she feels will best keep her under the radar from bullies and people who mean to make her feel bad about herself.

We’re both learning and walking this tightrope together. She’s dropped the topic of cutting her bangs. The chunk of cut hair is slowly (awkwardly) growing out. It serves as a lesson and a reminder to both of us that sometimes, in trying to ‘fix’ one imperfection, we create another, and that maybe it was worth leaving it alone in the first place. It is fine as it is. And so is she.

RELATED: Pink Slams Body Shamers in Way Only Pink Can