Without sharing this, you might never understand Tourettes and his over-stimulated brain. 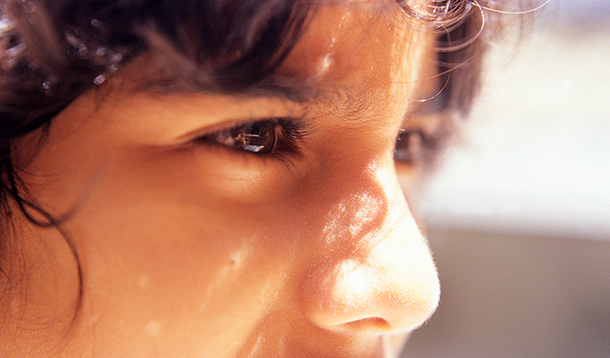 My son has gorgeous, dark chestnut brown eyes, and I’ve been watching them closely for twelve years. I used to view them from a distance, trying to glance inconspicuously at my tender-cheeked two-year old boy as he blinked too often - a frequency difference only a mother could perceive.

It seemed like an exaggerated blink in wonder, as if his excited young mind had seen something thrilling to behold and he couldn’t quite believe what was before him. There were rapid movements of his eyelids and a batting of his lashes that came too quick. Sometimes light and playful, his eyes would dart swiftly, as peaceful as a butterfly’s wings. At other times, there was a heaviness to its motion, his lids shutting and squeezing with a load and weight that seemed paradoxical to his young age, closing shut as if they were dry and tired and needing to find some respite for a few nanoseconds longer.

I was told it was age appropriate… but a mother knows.

I watched as the hands of time turned a deliciously huggable little toddler into a cautious yet enormously lovable young boy – those short years of childhood already growing and changing him together with the change in his eyes.

The blink joined a wiggle in his nose and a flare of his nostrils, as if he had smelled something foul. It then turned into a widening of his mouth like an exaggerated yawn, a jaw that opened swiftly, and a tongue that protruded out. It morphed into a lifting of his eyebrows, as if in surprise, a scrunching of his cheek, a tilt of his head toward his shoulder; all these movements momentarily contorting the shape of his face and his body.

And I watched it repeat and repeat.

Of course, a mother knows, and when my son was five or six, his Dad and I made sure that he knew it too. When he was diagnosed, we explained to our young son that he has Tourette’s.

He sat and listened, completely unaffected by the news, blinked, shrugged his shoulders up towards his ears, and responded “okay.” In that one short shoulder-shrugging moment, my son managed to teach me a life lesson that I’ve been trying to put into practice ever since that day: Worrying will never change the outcome.

Here is what I have learned through my son about Tourette’s: It is exhausting. He has jaw and eye tics that make his muscles ache in pain. His facial tics give him frequent headaches, and he has often come home from school exhausted from trying to suppress his tics all day. His hand tics make him lose grip of items. He can’t hold a hockey stick too tightly without feeling the need to release it, and we’ve had interesting moments at home where drinking glasses and iPods have hit the ground swiftly.

There is a world hidden to all of us about the inner workings of the human mind, but one thing is certain: My son’s body is continually acting to move while his mind is continually fighting the movement.

Tourette’s creates a hyper-sensitive quality for many of my son’s sensory experiences. Thankfully, he has learned skills to cope with his body’s seemingly overwhelming stimuli, but as a young boy, his brain had a hard time managing the incoming data. He would have full blown tantrums at the feel of any sock seam on his foot. He used to scream at bath time as if he were being badly burned, and cry at the touch of soft spring grass on his skin. He couldn’t stand the feel of a temporary tattoo on his body or a hangnail on his finger.

These days, bright light from a gloriously sunny day can hurt his eyes. He can be disturbed by the sound of a crunching apple or the smell of nearby nail polish. He needs to press evenly on both edges of the tip of a pencil to make it feel ‘right,’ and has feelings that he describes as bad shivers that makes him walk evenly with his feet, or have a symmetrical and mirrored action on both sides of his body.

I’m fascinated by the neural pathways that might be directing his behaviour. They are unpredictable, involuntary, and ever-changing, with his mind firing and re-firing all the time.

It has been an exercise in patience to parent my son through the emotions that has come with his Tourette’s, and I’ll be the first to admit that I haven’t always done my best. Indeed, the only one who has has been my open-hearted and brave 12-year old son. Every day of his life, my son wakes up to tics and falls asleep with tics, and rarely will you hear him complain about it. He can easily laugh and joke about his condition, needling me in jest with a “don’t worry Mom, it’s not a tic” when he playfully barks like a dog at home or makes a strange movement with his body.

He has openly shared this part of himself with his friends and his teachers, and I proudly watch with awe and admiration as I see him owning his difference. I hope it will empower him as he enters his teenage years, a phase in time in which tics have been known to increase in severity.

What compels me to share all of this? Really it is driven by a passion and vision that I have for all of us, myself included, to see the beauty in sharing those lesser-known stories within our lives. The pieces we don’t easily share with friends or family. The pieces we certainly would never imagine sharing on Facebook or Instagram. For it is these unknown pieces that make us unique and human, raw and fragile.

I dare say, if you looked at my loving son, you perhaps might not even notice the constant movement of his eyes, and you would be none the wiser about his Tourette’s and his over-stimulated brain. This is exactly the point… everyone has a story. Every person you meet and know has their very own, lesser-known story. My son, and his Tourette’s is but one of them. So perhaps, as we all turn the page in our journeys throughout life, we too will find the beauty and the gifts that are hidden in opening up and sharing our lesser-known stories.

Previously published at Bex. Inside. Out.

Rebecca Lander is a single Mom to two incredible kids. She has an eight year old daughter, Ellie, and a twelve-year old son, Matty, who was diagnosed with Tourette’s at the age of five. Once a High School Science and Mathematics teacher, Rebecca left teaching to co-found “You Name It Baby,” a unique personalized children’s gift store in Toronto.  She’s an avid runner and kickboxer, and she has a passion for writing about the raw, emotional, but always beautiful pieces of her life.  Follow her blog here at: https://bexinsideout.wordpress.com/