It's easy to lose faith in humanity, but it’s impossible to feel cynical after reading this story. 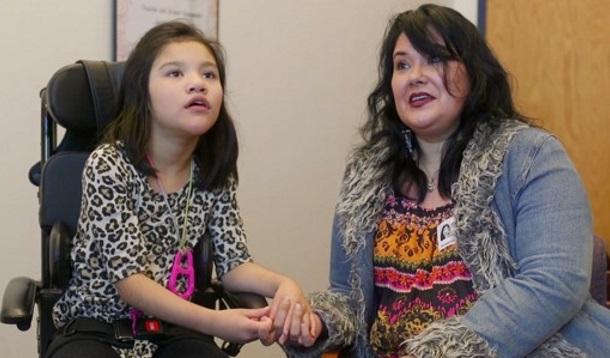 When American Thomas Mitchell saw a mom struggling to help her daughter, he knew he had to do something.

Mitchell works as a mechanic and as a substitute bus driver for the Clarksville-Montgomery County School System in Tennessee, deep in the southern United States. On occasion, he'll pick up a group of special needs children as part of his route. One day, he noticed Verna DeSpain was having a difficult time getting her 10-year-old daughter down the steps of their porch.

DeSpain's daughter, Lydia, uses a wheelchair. Their basic portable ramp actually made things more difficult, and DeSpain actually sustained a shoulder injury trying to carry her daughter down the steps.

"It worked better than not having one at all, but we had to put it on the second step and it was flimsy," said DeSpain. "It wasn’t the best or the safest."

After watching DeSpain's exertion, Mitchell couldn't get the image out of his head. While the Americans With Disabilities Act requires that public wheelchair ramps have a minimum width of 36 inches, Mitchell noted, "There was just hardly any room for her to maneuver this wheelchair. It just didn't seem right for somebody to have to struggle like that."

So Mitchell decided to build a customized wheelchair ramp for Lydia for free.

Mitchell wasn't quite certain how to start or whether he could handle the task on his own, so he reached out to others in the community for assistance. He even enlisted help from the manager of a local Lowe's store, who generously donated all of the materials needed for the project.

After months of planning, Mitchell and four friends showed up at the end of January to build Lydia her ramp. And after only a few hours of hard work, it was finished.

DeSpain expressed her surprise at how quickly Mitchell and his team completed the project.

"I thought it was going to be all day, so when he told me we were done I was just shocked and actually very impressed," she said. "They went above and beyond what we were expecting."

The team even included a small deck in the ramp's design, much to the delight of the family.

Lydia is a nature lover, so DeSpain says the pair plans to sit there once the weather warms up.

"I’m every thankful and grateful," said DeSpain. "It’s a major blessing. This is the best year my children and I have ever had."

Mitchell says the payoff for him is knowing that he made life a bit easier for the family.

"Everybody should be helping out their neighbor, and so many people just drive by," said Mitchell in a video posted to the school district's Facebook page. "So many people comment, you know, that it’s such a great thing. I challenge them to do the same. There’s no greater feeling."

With any luck, Mitchell's act of kindness will inspire others to pay it forward, too.

RELATED: 5 Cool Gadgets that Can Help With Disabilities

When she's not writing, Kelsey loves to travel the world and taste foreign food of all kinds. She makes a mean brownie, and is a firm believer that garlic makes anything and everything better. While she doesn't have any children yet, her glamorous furchild Lady makes every day better.