Here's What I Almost Forgot To Mention About My Pregnancy 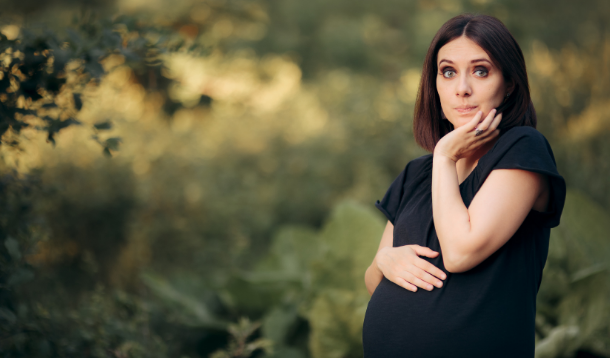 Pregnancy doesn’t last forever. It’s ten months long, one month longer than anyone cared to tell me but, still, not forever. Like most things that yield a louder, more visible result, once it’s over, it is difficult to acknowledge the process for what it is. Mere moments after my son was born, before my pregnancy ended with the placenta slinking out like credits playing to an audience already collecting their things to leave, I immediately forgot how being pregnant felt. Well, either that or I was too busy trying to learn how to keep a helpless, tiny human alive, or I deliberately forgot so I could be someone who brags, “Oh, ya, I loOOOooved being pregnant.” One of the three. Regardless, it wasn’t until five months postpartum, when I read the daily journal I kept while pregnant that I began to remember how pregnancy felt before the arrival of the thing (read: baby) that made it all incredibly worth it. It’s a brilliant psychological trick necessary for the survival of our species, I suppose - make us forget so we do it all over again. It’s pregnancy amnesia.

I know I’m lucky to have been pregnant. It was thrilling performing the ultimate multitask a human can undertake, walking around while casually creating a new human under my skin. That is not mutually exclusive with it being surreal and, at times, feeling more akin to a hostile takeover than a symbiotic process. Now that it’s over, there’s little point in dwelling. But then I think about my sister-in-law and all the other pregnancy virgins out there, growing a human for the first time, confused and anxious as fuck, desperately trying to interpret every symptom (I mean, bleeding, cramping, craving pistachios are all, in the dark corners of the internet, a symptom of a healthy pregnancy AND a miscarriage AND some other medically terrifying scenario). She needs to hear the gory details and know she’s not alone. If you ask mom-me, I won’t be much help. My pregnancy journal, on the other hand, inked in black and blue staring up at me like a mysterious bruise, tells it like it really is.

Here’s how my pregnancy felt, according to my journal. Trigger warning, there’s leaky vaginas:

“Maternity leave starts AFTER pregnancy? I’m assuming a man came up with that.”

“Everything feels off now, including the fact that I’ve become a human 3D printer with no control over what comes out.”

“People keep asking “how am I feeling?” That’s nice. I hope it continues. [It doesn’t.] How am I feeling? I truly do not know how I feel. Grateful. Excited. Like someone else entirely. Sometimes high on hormones and, the next moment, feel incapable of moving forward with my day. If anything, I’m wiser now. I’ve learned an existential truth: I’m not in control. (Whether or not I chose to accept that is beside the point). I feel like the fetus is sucking the life out of me and I’m trying, unsuccessfully, to not resent it. I know, that’s not fair – it’s only a tiny, innocent, alien-looking life form living inside me slowly draining my body of its youth.”

“My vagina is leaking excessive amounts of unexplained fluids. “Don’t be alarmed” my male OB-GYN tells me. I wonder how calm he would be if his penis started spewing viscous discharge.”

“Why am I speaking in ‘trimesters’ like I’m in high school? I’m twenty-two weeks. I am? No, I’m still a 34-year-old woman, last time I checked. Plus, no one speaks in weeks if there are enough weeks to make a month. But apparently, the way I’ve conceptualized time until now isn’t going to cut it.”

“According to the pregnancy Apps, I am no longer intelligent enough to visualize measurements without highly gendered references to items from a grocery list. Is that iceberg lettuce or romaine? Apparently, it doesn’t matter.”

“So tired. Is three naps a day too many? Not tired in an I-forgot-to-take-Melatonin way, more like the kind of tired when I wonder if I have an undiagnosed disease.”

“I can no longer sleep on my stomach. Suddenly, I empathize with stodgy old men with gigantic potbellies, a demographic I never thought I’d relate to.”

“People keep telling me to get my husband involved in the process. If I get him involved, does that mean we have to be near each other? If it’s OK, I’d rather be resentful: “remind me, why aren’t you the pregnant one?” Meanwhile he can think, “is it really that hard?” Then we can both pretend we aren’t thinking those things, as we carefully foster the ideal home environment that’s sure to mess up our little bundle of joy.”

“It’s almost over and everything is swollen, including my vagina. I didn’t even know that could swell. (It can definitely swell.)”

“I thought I was supposed to glow. If there’s a glisten, it’s just sweat. If anyone’s glowing, it’s my parents. “My daughter is pregnant!” They tell everyone, especially people who don’t care. Someone should tell them it’s not an accomplishment. If only I’d known lying on my back for three minutes was all it took to make my parents proud, I could have saved myself a lot of effort.”

Katherine used to share her opinions as a stand-up comedian in New York City but when the pandemic hit and she got pregnant at the same time, she followed the cues from the universe (read: gave up on her dreams and listened to her parents) and retreated to her home country of Canada. That's when she started her newsletter, Big List, Little List, where Katherine writes about a range of topics you wouldn’t normally find in a listicle, because she'd never call it a listicle. Katherine happily overshares her experiences as a stand-up, writer, neurotic mother, hopefully-not-evil stepmother, and wife to a foodie American. In her spare time, which is technically all of her time, Katherine is co-host of the action-packed short-form comedy podcast UncommonTakes with fellow standups, Adam Muller, Piers Moreton and Jimmy HVD.