Sometimes, it seems, things are meant to be. 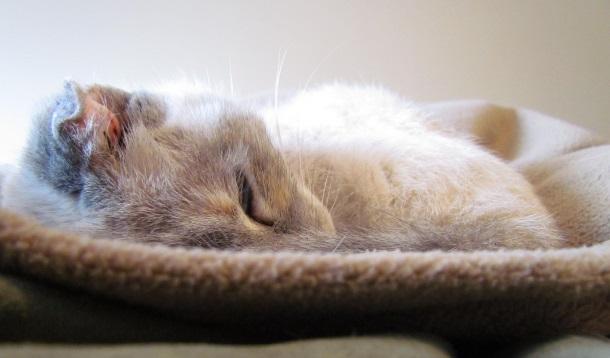 I never knew a lot about Twiggy's story. I don't know what her original name was, how she ended up alone and stray, and I was never sure how old she was. What I do know about Twiggy is that while meeting my father and gandmother in Illinois for Thanksgiving, she showed up in his yard under the wet bushes.

Most people tell me that this was the smartest - or luckiest - thing that Twiggy ever did.

We thought she was an adolescent. She was leggy and small. When we picked her up, she weighed nothing - a bare 1.6 pounds. She was almost nothing but fur and bone. She was missing most of her big teeth, and she had one ear that was a squashed and hardened ball of healed scar tissue from an old fight. When she curled into a ball, her tail wrapped all the way around her chest and part-way around to her other side. And she had the brightest blue eyes I had ever seen in a cat.

It was cold outside - almost freezing. We brought her in and fed her. There was no cat food, but we ground up some turkey. She ate like the starved thing she was, chasing after us to lick our dinner plates. And finally, as sated and stuffed as the rest of us, she sought us out as we sat and talked on the couch, curled herself between my husband and I, and fell asleep with her head in my husband's hand.

"No," he said, as he looked at me. We had two cats waiting at home for us already. We lived in Canada. We couldn't take a stray home with us.

But sometimes, it seems, things are meant to be.

My dad and my grandma couldn't keep Twiggy, so we called around to the local shelters. Twiggy's temperment was so lovey, we were sure she'd have no trouble being adopted. That cat sense of caution around strange people? She lacked it entirely. Twiggy didn't give a damn if you weren't a cat person. She was going to sit on your lap and fall asleep, and you were going to enjoy it.

I never saw anyone push Twiggy off their lap.

But the no-kill shelter was full, and they told us that Twiggy, starving, sick, beat up and likely full of parasites, would probably be put down because there were lots of healthy animals there already who couldn't be adopted.

So we went instead to the local farmer store and bough a box, some litter, a crate, and some kitten formula to feed her since malnutrition and the missing teeth made it hard for her to eat. And we spent that weekend calling through the phone book, trying to find a vet.

We found one, eventually. And the vet told us Twiggy was an older cat than we thought. He thought perhaps she was a breeder, since she clearly was some version of Siamese (at least, mostly) and not spayed. Perhaps multiple pregnancies made her teeth fall out. It happens, he said.

Twiggy got a rabies shot and a drop on her neck to get rid of the fleas. We were given medicine for the ear mites and more for intestinal parasites. And we took the paper that showed she had a rabies shot, and we went back to Canada.

It was an 8 hour drive to our home. Twiggy refused to be crated. She howled and stuck her paws out of the bars. Since she had the runs and needed to use the litter box almost every hour, we let her stay loose. And she calmly walked between her food, the box, and back to cuddle in my lap every hour for the entire trip. She was in my lap when we crossed the border, but the border guard didn't care that she had her shots.

He only wanted to know what we paid for her, and asked more than once. Nothing, we said, puzzled. The only thing we had paid for her was food and the vet bill. Eventually, he let us go.

We showed up at my in-laws place with Twiggy, since they were babysitting our other cats. Twiggy, less than a quarter the size of either of them, growled as she consumed the food my in-laws had left out. Betty and Scooter stared, perplexed, at the strange cat eating their food and growling like there wouldn't be more.

The next day, I woke up to a nose inches from mine. Twiggy slept on my chest, and she was so feather-light I never felt her there.

She made herself at home, and fit right in. She demanded to fit in, actually. As I said, Twiggy never imagined a world where people would try to get along without her; she just assumed everyone loved her and we were going to make her a part of our lives.

And pretty soon we did.

She'd sit on the toilet seat when we showered, and meow in concern that we were bathing. Like most Siamese, she was vocal, and she talked an awful lot. If we weren't petting her, she'd poke us for attention. She was actually surprisingly skilled at using her index claw to do so. When we crawled into bed at night, she'd shimmy down any gap we left in the covers and snuggle up to our bellies under the blanket. And when my husband came home after work, she would leap up from wherever she had been, tear down the stairs, and greet him at the door with lots of talking.

Twiggy was already established in our home when I got pregnant and had my son. She was there when he began to walk and talk. He called her "Wee-wee." She would cuddle with him when he napped or felt sick.

And then one day, in March of the year my son started kindergarten, she was the sick one. The vet told us she had a tumor in her jaw; her jaw would break soon, and to put her down was the only humane thing to do.

I waited three days and tried to coax her to eat. I took this photo and wept at the unfairness of a world that would find a way to shoehorn this one particular cat into my life so improbably and then take her away after only a handful of years. THIS cat, one who had a personality as big as any human, who had such fearless and generous love she'd show to everyone, including strangers.

And then she was gone.

I don't know why people want to buy a puppy or kitten from a store, not when they could find a Twiggy. There's loving, beautiful animals out there who have already been thrown away.

They're in shelters, breaking the hearts of people who work there who have to put them down because no matter how much they want to, they can't provide a home for every dog and cat, like this woman who wrote this story and put it on Facebook.

This breaks my heart, too. If you're thinking of a family pet, I beg you to consider a shelter first.

This beat up, starving kitty, who just happened to show up on a Thanksgiving and reminded me what being thankful was really all about, made my life better, even if she left a hole that will never go away.