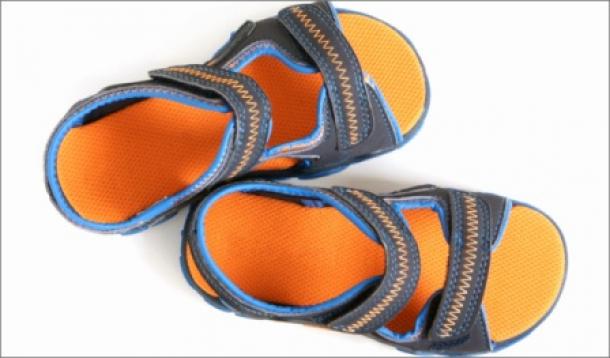 Five years ago, in the middle of a shoe store, I became the mother I was meant to be.

I stood in the shop clutching a skinny, just-walking boy, a pair of orange sandals and a pair of brown ones. The orange seemed a little big, but would give him room to grow. The brown seemed perfect, but might fast become snug.

Looking from the brown to the orange to my son to my mother and back again, I felt a familiar discomfort. The one that rises up in the pit of a perfectionist’s stomach and pushes its way out her ears while she struggles to make the “right” choice. My boy was writhing wanting to resume running around the shop. My mother was dutifully listing pros and cons about each pair. And the saleswoman was becoming more than a little impatient.

“They’re just shoes.” I turned to look at her. “They’re just shoes,” she repeated matter-of-factly. And she was right. Three words from a complete stranger were the final push I needed to completely change my life.

After investing thirty years honing my perfectionism and anxiety, I had it down to a science. Ignoring the big picture and dwelling on minutiae was what I did best. Having a child added new dimensions. Suddenly, there were more things for me to dwell on and fuss over. Including tiny shoes, apparently. And I hated it.

I like shoes as much as the next mama, sure, but this particular decision didn’t deserve more than a moment of my time. Most normal people know these things instinctively. I, on the other hand, was straying quite far from normal. I had a sweet little boy eager to play with me, a mother who was kindly putting up with me, and a salesperson ready to wring my neck. All the while I was close to a panic attack. Over a pair of toddler shoes. A simple moment filled with unnecessary anxiety like so many other moments in my life. And yet this time, something more.

How easy it might have been to tell that woman a thing or two about where she could stick those shoes. How simple to have walked out and complained about people who get involved in other people’s business. But for some reason I didn’t. I bought the orange pair without another thought and walked out. And I was liberated.

In the months since my son was born, I’d found myself slowly shifting, starting to realize that my ever-present indecision and anxiety was wasting so much of our time together. More and more, I was angry with myself for spending so long - sometimes entire days - in the throes of worry. The saleswoman said the words I needed to hear. But it was that little boy in my arms who inspired me to change.

Becoming his mother compelled me to stare down the anxious ghosts that had haunted me since childhood. I didn’t have time for them anymore. I had sandcastles to build, rocks to collect, driveway rivers to create. And the shovels I used didn’t have to be the best. And the rocks didn’t have to be smooth. And the rivers didn’t have to run straight. Motherhood introduced me to a peace I’d never tasted before.

Through my son - and his little sister and their baby brother - I have found a new way to live. And I love it. I walked out of the store that day with two things I will treasure forever: the freedom to stop worrying about being perfect, and the cutest pair of orange sandals in the world.

Stephanie Phoenix lives in Toronto with her husband, their three curiously-named children and whatever insects her progeny insist on bringing onto the front porch.

After her first child was born, she went from book buying for a large chain of specialty toy stores to book reading for the coolest kids on the planet. She spends what little “free” time she has writing for Cool Mom Picks and People.com’s Moms & Babies blog while also working as a Social Media Intern for Healthy Child Healthy World. And though she has been saying for years that she’s going to start her own blog, she’s only just now getting around to doing it.