Skin Cancer: Moms, This Is Your Reminder To Advocate For YOUR Health

We Don't Hesitate To Advocate For Our Children 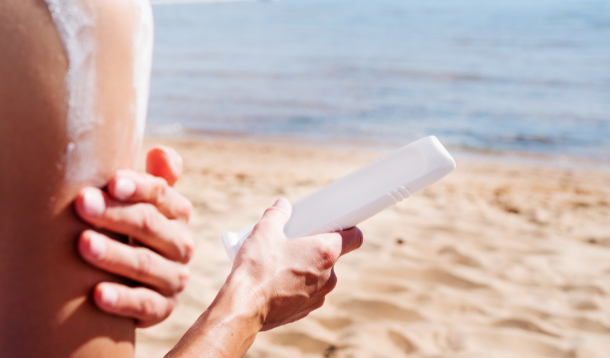 One month before my 39th birthday, I was told I had skin cancer. What I had thought was a pesky pimple on my nose was actually a squamous cell cancer that would not only be difficult to remove but would rapidly grow and take over the right side of my nose.

May is Skin Cancer Awareness Month, not only a time to bring further attention to the most common type of cancer but to also remind parents why we need to be health advocates for ourselves and our children.

Being an anxious person, I made a doctor’s appointment when I first noticed that the spot on my nose was growing. During a follow-up call the week after, the doctor assured me that I had milia, tiny white bumps that appear on the face. I quickly Googled images of milia. Definitely not. I asked the doctor if she was sure and was given a confident “yes, I’ll refer you to a cosmetic dermatologist to have it removed.”

That would have been that except I knew it wasn’t that. And here’s where persistence and good fortune matter.

I have been seeing a dermatologist yearly since I was a kid because I was given the gift of fair skin mixed with more than a healthy dose of moles and freckles. I had crossed ‘pimple’ and ‘milia’ off my mental list of ailments, but cancer was not yet on my radar. I got an appointment in 10 days’ time – a miracle in the specialist world.

On the day of the appointment, I sat in my dermatologist’s office and watched as he furrowed his brow while stepping forward to have a closer look. He told me I likely had either a keratoacanthoma or squamous cell carcinoma. Both can grow rapidly, affecting sun-exposed areas of the body – importantly, they are usually highly treatable.

I left his office feeling confused and alone. I instinctively called my mom as I felt my face grow hot and the tears come quickly. I almost laughed when I told her it was skin cancer. At 38? I felt both young and old at the same time. My two kids were too young to have to process what was happening to their mother. They were familiar with the newly-formed mountain on my nose – beyond that, we chose to keep the details of the diagnosis quiet until we had a better idea of what to expect.

As I would soon learn, it would be another three weeks until I would see the plastic surgeon. Of all the reasons to see a plastic surgeon, this was not exactly what I had expected.

During that time as the tumour grew and changed its appearance, I learned more than I ever cared to know about the various types of skin cancer. Malignant melanoma is the type I was most familiar with – rightly so, it is the deadliest form of skin cancer. But, there’s also basal cell carcinoma, actinic keratosis, and squamous cell carcinoma (the second most common). More than 80,000 cases of skin cancer are diagnosed each year in Canada.

My kids were a welcome distraction. Many friends and family offered to take the girls for playdates but feelings of loneliness would often lead to moments of “why me?” I threw myself a few pity parties but as any parent knows, the demands of young children stop for no one. Admittedly, I wasn’t my best mom self by any means, but I gave myself some slack. I had cancer, after all.

On the day of my surgery, I felt both anxious and relieved. More than six weeks had been spent leading to this moment. The surgeon “completely, but narrowly” cut out the tumour which was found to be a deeply invasive squamous cell carcinoma. More than a quarter of my nose was removed. I even received a pseudo facelift when skin was taken from near my right ear to form a skin graft.

Between monitoring for any sign of the cancer’s return and the ongoing process of skin grafts, I will be eternally grateful for my persistence and the good fortune that came my way. It could have been so much worse. I share my story to remind you that there is no regret when you self-advocate. And as I adjust to my “new normal”, my kids at least think the scars are pretty cool.

I have worn sunscreen and a hat every day for more than 10 years. I have no fulsome explanation as to why this happened to me but I am thankful that I now have the opportunity to learn what I can do to be extra cautious – and importantly, what I can do for my children. The Canadian Skin Cancer Foundation has many helpful resources, including kid-friendly sun safety presentations.

Feelings of anger and anxiety have largely given way to resilience and self-empowerment. And while I may now resemble Kirsten Dunst in Interview with the Vampire – pressed against a wall, afraid of the sun’s harmful rays – I’m not afraid to share my story. I’ll take every opportunity to promote skin cancer awareness with the hope that if this happens to someone else, they advocate for themselves quickly. You can find me in the shade, wrestling my kids to wear their hats.

Lindsay Marett is a writer and strategic communicator with a passion for storytelling. Born and raised on the North Shore of Vancouver, she loves exploring this part of the world with her husband and two young girls. One global pandemic and a treacherous bout of homeschooling led her to take a step back from her career to figure out her next role (and daydream about being on SNL). Until then, she’ll write about making lemonade out of life.