Connect With Your Kids By Talking With Them, Not At Them 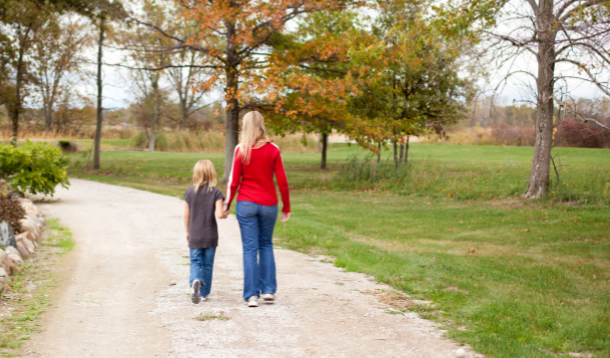 “I think rock climbing might be good,” I said, as I looked through one of the brochures online. “I remember you liked it when we did it last month, right?”

“What about the princess goes on top of the piano,” she said, musing as she set down the figurines. “And the horse should go—oh, I don’t know. Maybe I should make a stable for it. What do you think?”

“Or a regular day camp,” I said, clicking onto another website. “That might be easier—and closer to our house.”

“I know!” Her eyes lit up. “I could put a stable—and add some circus animals. The only question is—which ones. Hmm—which are your favourites?”

“Mom!” she said, her face reddening. “You’re not listening!”

“Sorry.” I clicked the computer closed. Clearly, I hadn’t been listening. And, as a speech pathologist and education lecturer, I felt especially silly. I knew how much back-and-forth conversation with kids mattered. But I wasn’t talking with my daughter. Instead, we were talking at each other.

Since that time, I’ve come to realize that all of us do this, some more than others. But it happens more often than we think. We want to have connected conversations with our kids—but so often, when we get to the moment, we have an agenda in mind, or a point we want to make. Or we think there’s a “teachable moment,” and we have to use it.

That’s all understandable. But really, as I’ve seen in my own journey sometimes simply sitting and listening can lead to the most teaching and learning—and to the most connection.

I think of the times when my daughter has spoken the most, in terms of explaining what she’s feeling or what’s on her mind. When she was younger, it was so often when I was sitting with her, often in near-silence, watching what she was doing, or chatting with her as she braided her doll’s hair. When she grew older, it was on long walks. Sometimes we headed to a neighborhood café, sometimes to nowhere in particular.

“Let’s go to the playground and back,” she used to say.

I nodded, sensing there were things she wanted to tell me. Walking would help me listen and would help us both open up.

I’ve learned from those conversations how powerful it can be to talk with and not at my daughter—and my son as well. Rather than coming in with my own agenda, I let her take the lead. Rather than having an idea I need to get across, I wait and see what’s really on her mind. When I do this, even for a little bit, I can see her face brighten. She relaxes. Then she starts to speak.

On those walks, I learned to notice the balance of quiet and talk between us. Sometimes, I’ll do more of the talking, and sometimes my daughter will. Sometimes she invents But when we each take the time to listen to each other, I sense we’re far better connected. We also laugh a lot more.

All we need, I’ve found, is a little bit of quiet and an activity we can do together, that keeps us moving but isn’t too challenging. It helps if I can take some one-on-one time with both kids. Otherwise, so much can get lost in the back-and-forth of chatter between all four of us, and the inevitable sibling rivalry.

For sure, it’s definitely not always easy. Sometimes we can’t find the time. But, seeing how much both my kids benefit, I’ve started trying to make time when I can.

Rebecca Rolland is a speech pathologist and the mom of two school-age kids. Her book, The Art of Talking with Children, is forthcoming in March from HarperOne. She's a lecturer at the Harvard Graduate School of Education and is on the faculty at the Harvard Medical School. She also serves as an oral and written language specialist in the Neurology Department of Boston Children's Hospital and consults with parents and families. Find her on her website, subscribe to her newsletter, or follow her on twitter or Instagram. She'd love to hear from you.