The Day I Learned I'm the Same Age as Homer Simpson 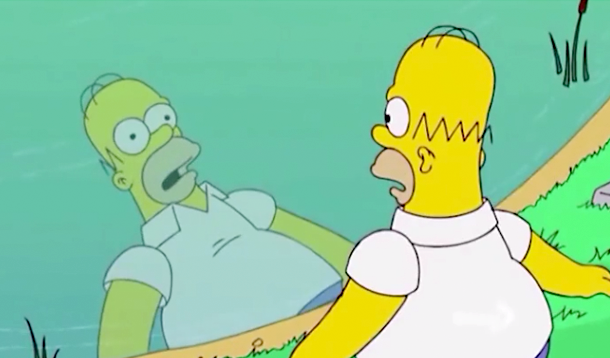 “This is bullshit!” said I.

I stared at the TV like some horrible breaking news had just cut into my cartoon program. How could Homer Simpson – bald, old, Homer Simpson – be thirty-eight?  It broke my brain. When the first episode of the series aired, I was the same age as Bart. I wore a Lisa Simpson shirt to my grade five class, for fuck’s sake. How did I now live in a world where I was the same age as Homer? And what’s worse – this was last year. I am now, wait for it…older than Homer Simpson. Let that sink in. If you were born before 1981, I have bad news for you!

The next blow came when I turned on hip, new teen drama Riverdale and in walked Luke Perry – as the dad. With his entrance I realized that an entire generation of people would know him as, “the dad on Riverdale.” Do you remember Mr. Walsh, “the dad on 90210?” He was a weenie. Well, at least that’s how we saw him. He was the dad, Luke was the hot young star.

Luke becoming the dad forced me to face another stunning realization – that made me Mrs. Walsh. What the actual fuck? I might think of myself as young and cool (hello, fellow kids), but the reality is, if I were to star in a young adult TV show now, I would be the mom. I didn’t know if I should scream, or stand in the next room, waiting to become relevant when someone needed sage advice or a snack. Did I need to feather my hair? Is that how this works?

While I have you here and feeling old, let me throw some numbers at you. Remember Corky and Miles on Murphy Brown? They were twenty-four and twenty-seven when that show started. The aforementioned Mr. Walsh? He was thirty-five. Okay, I’m going to need you to sit down for this one. Are you sitting down? Okay. Mr. Grant (Ed Asner) on Mary Tyler Moore – he was forty-one. Forty. One. Deep breaths. (Also, Archie Bunker was forty-seven. Okay, I’ll stop.)

Okay, so I’m the TV mom now, not the star. What does that mean? Why does it upset me? I’m not someone who fears aging. I embrace my greying hair, I look forward to my fortieth birthday next year, I have written full articles on how little I mind aging. I don’t even wear make-up. So why do I care if I’m Mrs. Walsh?

It’s because the TV parents on these shows are invisible. They are secondary characters. They are two-dimensional. They represent the shift I have made from target demographic to the periphery. They mirror what happens to real women as we age.

I have to scroll to find my birthday in drop-down menus, reminding me that I am not who this product or service is primarily aimed at. I see actors on Twitter urging viewers, “especially those thirty-five and under,” to watch their shows, because the popularity with the under thirty-five cohort is what determines whether or not they stay on the air. At thirty-nine, my opinion is demonstrably less important – even for shows that are aimed at adults.

Who cares, though, right? I mean, I didn’t expect to be twenty forever, and I sure as hell wouldn’t choose to go back to being twenty. I think all of it just made me feel insignificant. It made me feel erased.

It turns out, I’m not alone in this feeling. You know who spoke out about it? Mrs. Walsh herself, Carol Potter. I looked her up, and guess what? She fought producers tooth and nail about her character’s portrayal. She hated being used as a prop for the kids on the show. She wanted TV moms to have more depth, and more realism. She wasn’t expecting the show to shift its focus onto her, she knew it was a teen drama – she just hated the message the writing of her character sent about older women. She hated being erased.

She wanted to show the young people watching the show, especially the young women, that moms and older women lead full and complete lives outside of the care and keeping of their children. Mrs. Walsh might have been a glorified snack tray, but Carol Potter is a badass.

I’ve decided to shift my focus. I refuse to be relegated to the sidelines to make way for the “more important” demographic. The youth shows can have their invisible TV moms, I’m going to amplify the shows that show dynamic, multi-faceted older women, like Grace and Frankie, Veep, Jane the Virgin, and others that show how much women over forty have to offer.

And kids, if I can watch Riverdale, you can watch shows that star middle-aged women. You might learn something.

So Homer? How’s it going, little brother? It’s been twenty-nine years since you first hit the scene, and you’re still going strong. Guess what? Me too.