Breastfeeding in Public: You Do You 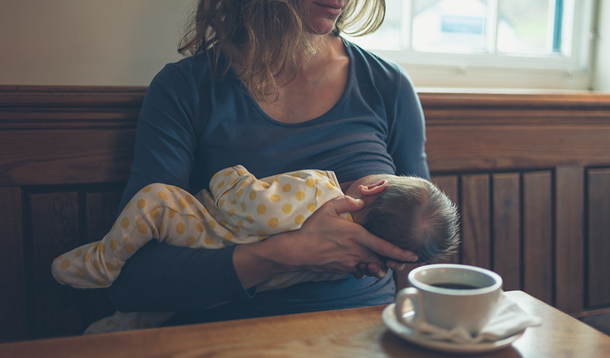 I spent months pouring over parenting and newborn books while pregnant with my first born. I was particularly obsessed with how-to breastfeeding manuals, devouring any literature I could get on the subject. At the time I imagined nursing was this experience that would challenge me to my core, but would be made easier with MCAT exam-level preparation.

Despite my constant reading, I don’t remember these books discussing the topic of breastfeeding in public. My level of preparation for such an event event was buying one of those oddly shaped blankets designed to cover my nursing baby, with a cutesy name that compared me to a cow milking her calf. I assumed this part of nursing would be simple, I’d use my large bib to cover myself and baby, or just sneak off to a quiet corner.

When my daughter was born, breastfeeding ended up being more of a challenge than I anticipated. I failed the nursing exam, according to my actual nurses, who didn’t want to release our family from the hospital after 24-hours. Their concerns were valid, I was very young, unprepared, and struggling with getting a hang of, well, everything.

After deliberating for a bit, we ended up hightailing it out of the hospital. I was stressed from the constant check-ins, and nurses pulling my breasts and tugging my nipples in odd ways that made me more tense than anything. I wanted to sleep in my own bed, and figure this nursing thing out just me and my baby.

I stayed home a lot during that time, afraid to be stuck out and about with a baby and my exposed boobs. No matter how hard I tried to use the weird cover-up thing, it always ended up strangling me and exposing my breasts even more.

When my youngest was two-months-old, we were leaving the mall when the driver behind us drove into our car. It was more of a bump, and there was no damage to the car, but to a new mother who is in fierce lioness mode, the world may as well have ended. I jumped out of the car, and screamed at the driver, “THERE IS A BABY IN THIS CAR!” I then scooped up my screaming infant, plunked myself down on the sidewalk, and pulled my boobs out for the world to see. I nursed my baby until she settled, my husband dealing with the driver and insurance, and cars driving slowly past us. I didn’t care, and the not caring felt like sweet freedom.

It’s been seven years since the day I rage-screamed at a stranger, and I’m been nursing my three kids for a combined total of five years and four months. I’m not really an extended breastfeeding advocate, in fact I am very supportive of the Fed is Best campaign, it’s just what has worked for me and my family.

Over the years I have become really comfortable with nursing in public. You name a situation, and I’ve probably breastfed in that situation. It’s become a part of my life, and now I don’t even really think about it anymore. Luckily, I haven’t received any complaints in all my years of public nursing. Whispered remarks and awkward stares, probably, but not to the point where I’ve really registered it.

Maybe I’m lucky, or maybe the area I live in is really accepting. But the biggest shift that has happened over these seven years is my own belief in my right to nurse in public.

Now that I’ve nursed newborns, toddlers, and even a preschooler, I don’t concern myself with whether the timing is right, or if I’m going to make people uncomfortable. I just do what I have to do, and I don’t make a big deal out of it. I’ve learned there are discreet ways to nurse in public, but I don’t ever cover myself or my child with some weird heat-trap that doesn’t work.

I’ve stopped thinking about my nursing breasts as a sexual object, and instead have embraced them for the function they’re serving in that moment. I don’t concern myself with someone else’s opinion either, I just do what works for me and my baby.

One of the most beautiful outcomes of becoming comfortable with nursing in public, has been the acceptance of my body in general. If I don’t care about nursing, without a cover, in front of strangers, friends, and family, then I don’t really care about what people think about my body. It is what it is, and I am more than the flesh that covers my bones, or the breasts that nourish and comfort my child, too.

My motto remains: do whatever works for you. If nursing with a cover is what makes you comfortable, do that. If you long for the freedom of nursing wherever, embrace what you’re longing for. And if you have zero interest in nursing at all, or if you are unable to for whatever reason, there is no shame either.