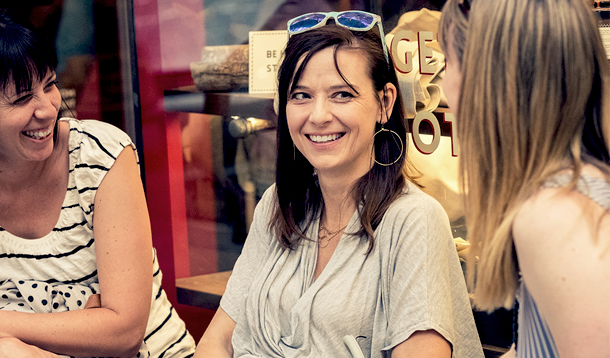 Am I socially awkward? Well, I may have been voted Most Likely to Say “You Too” When Someone Says “Happy Birthday.” Talking to people is hard. Talking to people you don’t know is even harder. How do you start a conversation out of the blue at a party, or the park, or anywhere else there is a reasonable expectation of socializing. “Nice shoes” only goes so far. But here’s a little secret – while they may not come with instructions, kids do come with built in conversation starters.

If any child in the group is under five, this is a no-brainer. It doesn’t matter if most of the kids are older, you just need one smaller one to introduce the subject. It’s a given that, in any size group of adults, someone’s kid is or was a shitty sleeper, and that person will be more than happy to tell you all about it. Even if that kid is twenty-five and married, their parents have not forgotten their terrible sleep habits, and they still want sympathy for it.

How Much You Hate a Popular Kids Show or Trend

Announce that you or your kid just got over something, others will chime in with their ailments. Misery loves company and playdates. As a bonus, everyone will take a healthy step away from each other during this discussion and you will gain some extra personal space.

How Much You Can’t Wait For Something

Compliment a parent on their child’s outfit. They will tell you where they bought it. You can get a good, solid ten minutes discussing clothing from a specific store, what sales are good there, and what similar stores are better or worse.

“Hey, I just met you. And this is crazy. But here’s his big head. I birthed it vaginally.” I have yet to attend a parent get-together that didn’t eventually come around to birth stories. It just happens, naturally, like thirty-four hours of labour (which is the amount of time I spent in labour with my first, would you like to hear about it?).

Being a Hot Mess

What’s a hot mess? No one knows, but everyone is one. A parent could walk in, directly from the Oscars, still in their formal wear, followed by three children who came straight out of a Julie Andrews movie, after everyone had a full night’s sleep for the 600th night in a row, and they would still be all, “I’m such a hot mess.” Everyone’s a hot mess and everyone will happily tell you about it.

Someone’s kid is always going to be an asshole to someone else’s kid, and that kid’s parent will end up apologizing for the assholery of their kid to the other kid’s parent. The assholee’s parent will say it’s fine and laugh it off, but won’t entirely mean it because how dare that kid do that to their kid, and the assholer’s parent will feel guilty. It will be super awkward for a good, long while, but it will open up the lines of communication.

When in doubt, say something controversial. “Oh, you’re still breastfeeding?” “I never let my child use a pacifier.” “Blah blah blah essential oils.” It will liven up the room but quick.

Sure, for a while the days of discussing literature and politics seem to give way to sippy cups and bowel movements – but at least having a kid means you will always have a way to start a conversation with someone you probably don’t want to talk to anyway.