Let it GO: The Amazing Benefits of Not Caring About What Your Kids Wear

It is so much easier now 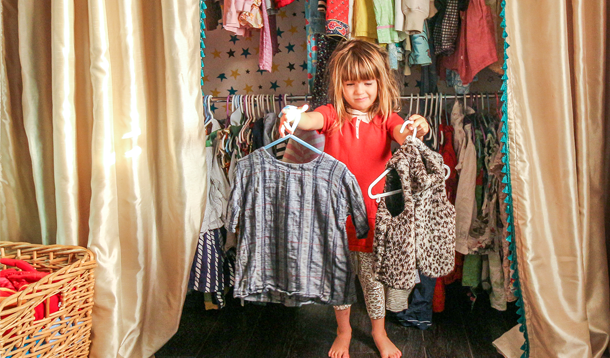 Parenting is a day-to-day process of managing and triaging the number of effs you need to give to each and everything your precious little child does. From the time they’re born, we need to care about ounces drank, minutes slept, hours crying, burps, poops, spit up and on and on on. We need to care about All. The. Things. And it’s exhausting.

So, as our kids grow and slowly start to battle for independence (“I DO IT!”), the hills to die on multiply and hit new heights and our energy? Well, it’s not like it’s increasing as the road gets bumpier to navigate!

That’s why, when my once colicky, then delightful two-and-a-half year old, decided to battle over every single thing I picked for her to wear, I said screw it, have at it. Honestly, who the hell cares if a two-and-a-half-year old wears print on print on print? No one. And if they do, really, they need lives. At the end of the day, if this kid walked out looking like an eye sore, in weather appropriate clothes, what would be the worst that could happen? Someone would be entertained. The horror!

It was the first parenting battle I was more than happy to concede. The second I stopped caring what my pre-schooler wore was the same second my morning routine no longer had a major stress and guaranteed daily fight. The storm lifted, the clouds parted, my angel felt a sense of control and I had one less thing to do in the morning. Win win win!

I know plenty of people for whom getting the kids dressed in the morning is their single most stressful part of the day. Kids are friggen particular! One day they love flowers and dinos and the next day? You might have well suggested they move back into diapers for the rage and indignation that ensues. It’s seriously just not worth it. It’s not.

It was seven glorious years ago that the rules for clothes in my house changed from ‘here’s what you’re wearing’ to ‘wear whatever the hell you want as long as it’s weather appropriate.’ I dare say my now-nine-and-a-half year old has a far better fashion sense than I ever did (the bar, in fairness, was low). While most of her outfits were entertaining misses for years and years (oh the combos I saw, and looked past), the kid now has a hell of a sense of style.

Maybe she wanted to express herself at two the way she does now. Or maybe she just wanted control over SOMETHING. Who knows. What I do know is that, as parents, the battles we have are many. The times we’ll have to deal our heels and in and say ‘no! we know better!’ are countless. I can say with certainty that giving up this one battle was probably the best parenting decision this mom has ever made.