Gallstones Is Not An "Old People" Problem. Do You Have These Symptoms?

If it's not food poisoning or stress or indigestion, it might be gallstones. 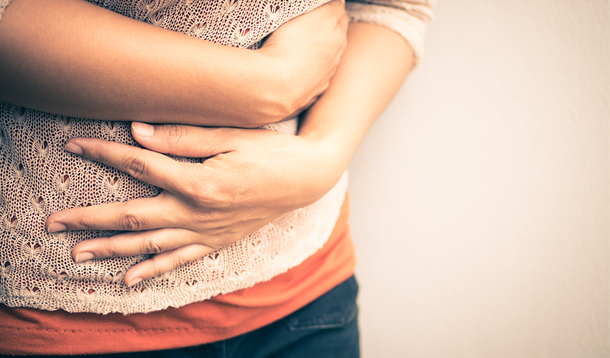 At first, I thought it was the tuna salad from the cafeteria. I was feeling – off. I went in to my university medical clinic to get checked, not because I was in extreme discomfort, but because I didn’t want anyone else to get tuna poisoning. The doctor cleared the tuna of any ill-deeds, suggested it might be gallstones, gave me a requisition for an ultrasound, and sent me on my way.

The ultrasound was clear. Good to go, I thought. I even got my taste back for the tuna salad. A short time later, I started feeling more than off. I was struck with so much pain I could barely walk. I threw up. I had a floor mate call the paramedics. At the hospital, they told me they didn’t know what was wrong, and sent me home.

These excruciating attacks continued. I was in near-constant discomfort, with acute attacks happening at least once a week. It would come on like a sharp, consistent pain in my upper abdomen, radiating to my back. Once it hit, I had to get into a comfortable position immediately because within seconds I would be unable to move at all. Picture a back labour contraction, but lasting one to two hours with no break. It usually caused me to vomit. I learned that was from the pain not the condition.

I was afraid to eat. I lived mostly on Arrowroot cookies and pudding, and I ate very slowly. I lost thirty pounds in under two months. “You look great!” people told me. 'Thanks, I’m the sickest I’ve ever been!' I wanted to respond.

I learned to focus on an object to get through the pain. I breathed in relief and breathed out the pain. Essentially, I was giving birth once or twice a week for six months. It got to the point that I became so good at the breathing and focusing that I could put myself in a trance. I fell asleep once.

I saw doctor after doctor. They all said the same. It sounded like gallstones, but the ultrasound was clear. I had a myriad of tests. I drank radioactive chalk-like fluid. I had a camera down my throat. I was misdiagnosed twice, and given two different medications for conditions I didn’t really have.

The following month I had an easy day surgery, they took my gallbladder out through my belly button, and a few small scars are all that I have left to remind me of that six months of hell.

Here is what I learned from that ordeal:

Gallstones can present differently from person to person. Some people have mild discomfort over time. Some have one true attack and never have another one. And some people, like me, have their lives turned upside down.

If the symptoms fit, but the test doesn’t show anything, ask for it to be redone. Advocate for yourself. I learned that my original ultrasound had been compromised by movement, and still no one had redone it until I insisted.

Gallstones are not just for “old people.” They told me I was exceptionally young to have them, but several members of my family have had them in their twenties, and every month I hear of someone under forty feeling the effects of them or being diagnosed. I hear it a lot from young mothers as pregnancy can increase your risk of gallbladder problems.

Watch for the signs. The Mayo Clinic says to watch for:

And seek immediate medical attention for these symptoms:

If you need the surgery, don’t stress about it. It’s usually a simple laparoscopic procedure. I went out for dinner the next day, and didn’t finish the pain medication. It is far less painful than the attacks themselves.

Gallstones are both terrible and common. If you think you might be experiencing them, get in and see the doctor. Thankfully, it’s been eighteen years since my last gallbladder attack. Good riddance to bad organs.