This can be a tricky area to navigate in a friendship 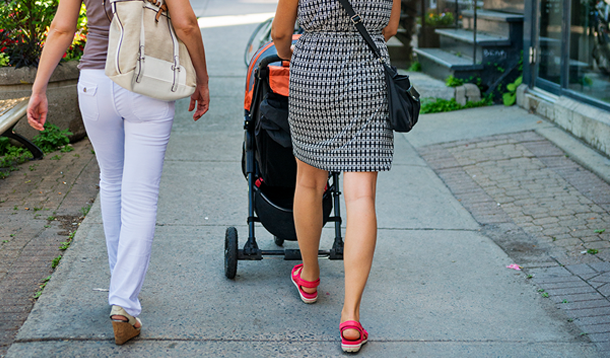 Friendship between women can be one of life’s most fulfilling – and also complex – experiences. Especially as we attempt to navigate those friendships through major milestones in life, many of which don’t necessarily occur at the same time.

These days, much has been written about the ways in which our friendships inevitably change after things like marriage and being the “first” in your friend group to have kids. But what happens when you have kids, and a friend - who desperately wants them - can’t?

According to the Center for Disease Control and Prevention, approximately 1 in 10 women between the ages of 15 and 44 will have difficulty getting pregnant or staying pregnant. If we are lucky enough to not be one of these women, most of us will have at least one friend in our lives who is. And too many of us can probably relate to the experience of a friendship that went sour – either directly or by simply being “ghosted” out – under these exact circumstances. I hear this from friends and my therapy clients alike all the time.

I personally have had two friends in my life who struggled to conceive and give birth, and over the same time period I had my two sons with relative ease. Only one of these friendships endured it. Ironically, it is with the one who took far longer and went through much more to have her now 6-months old baby girl.

It’s a sad and complicated situation to be in. For a few individuals, being that 1 in 10 may have come down to lifestyle choices. But for many or even most, it happens beyond their control. And it simply isn’t fair.

This unfairness that one woman should struggle with something that comes more easily and naturally to 90% of the rest of women, something we might even believe deep down to be our biological right, can understandably be grounds for some enormous (and potentially irrational) emotions.

If you’re someone who didn’t experience this, it would be next to impossible to understand what it must be like to go through it: The frustration, confusion, grief and sadness. So if you’re close to someone who is struggling with having children, don’t try to sympathize but do try to empathize. Be supportive and lend an ear to your friend’s feelings when she needs it, but also be just as happy to change the subject and avoid it altogether when that’s the direction she needs to go in for the day.

Steer clear of airing to her how tough your pregnancy/sleep deprivation from having a newborn/breastfeeding/chasing your toddler around is. Remember: She’d give anything to be in your tired, worn-out shoes. Save it for your friends with kids.

Don’t be offended if she’s a no-show at your baby shower/child’s birthday party – some things are simply too painful a reminder of one’s own personal struggles. At the same time, don’t permit yourself to be lashed out at or made to feel guilty for having your own kids. That’s what happened in my case with friend number two, and we both inevitably realized we would have to part ways.

If you do find yourself feeling unceremoniously “cut out” of a reproductively challenged friend’s life, try not take it personally. Although it can feel hurtful, and while your initial reaction might even be one of indignation, her behaviour isn’t about you. It’s more about needing to step away from a situation in which she feels emotionally weak, and understandably so. Having children is still something we have only a certain amount of control over, despite how much we may desire them, or how much energy and effort we put forward. And that can leave one feeling quite powerless.

Instead, grieve the loss of your friendship if it was a significant one. Sadly, I have seen this come between even the closest of friends. Next, determine whether your door is open for her to walk back through, should she wish to one day. If it is, let her know. In either case, then turn the other way and enjoy the rest of your life.