When Even Your Cuddling Tolerance is Approaching “Touched Out” Levels 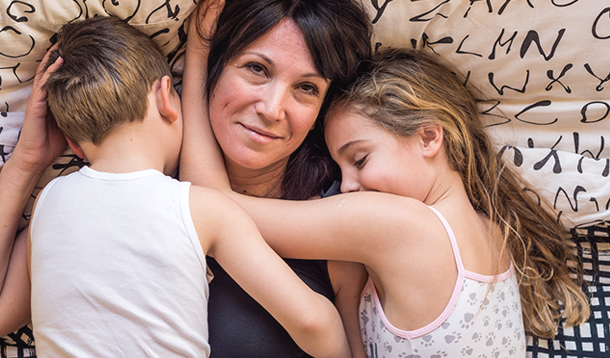 Have you ever been convinced you’re going to end up the subject of a judgy post in a local mommy Facebook group? I’m actually surprised I didn’t end up in mine today.

It would have read:

“What would you mommies have done? I was at a walk-in clinic today and a little boy asked his mom for a hug and she said no.”

I saw that lady at the walk-in look at me sideways when I told my seven-year-old I didn’t want a hug.

Has she never just been Touched. Out?

I have super-physical kids. They like to be snuggled and hugged and give kisses. It sounds super lovely, and it mostly is, but do you ever just not want to be touched anymore?

Have you ever gotten to the point where it’s like nails on a blackboard?

It’s my body. My skin. I should be able to tell ANYONE that I don’t want it touched; including my kids!

Today, I simply didn’t want to be touched. I sucked it up a few times and gave my kids squeezes. I’m not a cold witch. But the extra random snuggles, and the random but constant kisses on my upper bare arms? No! Just stop!

There are so many times when I snuggle up on the couch with my son, while we watch a movie together, cuddled the whole time. Sometimes we’ll fall asleep, him in my arms, and nap. There are so many days (most days!) when we hold hands the whole way to school. I love that he loves to snuggle and hold hands with me. I mostly eat it up.

There are days when I want none of it. Of course, those seem to be the days my children seem to want extra snuggles and hugs and kisses. Maybe they sense that I’m not feeling snuggly and want to give more to make me feel better?

I don’t think I’m damaging my kids if I say no to a hug. I’m just trying to listen to what makes me uncomfortable and express when I’ve reached that point. I shouldn’t have to endure physical discomfort to appease someone else’s random need for a snuggle. I want them to respect that about me, and anyone else who expresses discomfort with whatever physical interaction they’re having.

So, if you were that mom giving me cut eye at the walk-in, please don’t judge me for telling my son I didn't want to be hugged. He had had plenty from me already today. I didn’t want to be hugged at that particular moment. I am okay with telling anyone, including my own child, that that is a boundary I currently have, and I should be able to ask anyone, including my own child, to respect that.

Tomorrow I’ll likely feel for all the snuggles again. We will walk to school hand-in-hand. The arm kisses won’t send unpleasant sensations down my spine. But, today? Today I am Touched. Out.

It’s a thing, being touched out.

I’d buy myself a shirt that says ‘Touched Out’ on it, but chances are my kids would think it’s cool and want to trace the letters on the shirt while I’m wearing it.