Stretch Marks are the New Plus Size (and We're Loving it) 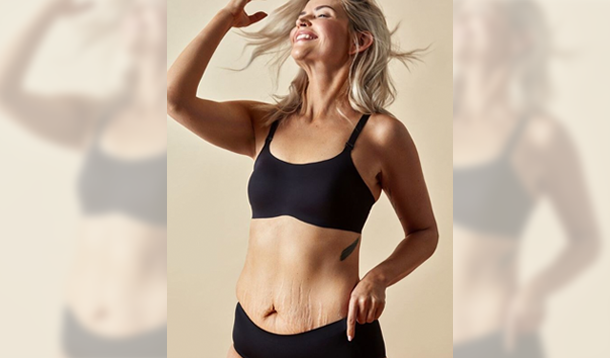 Unless you’re living under a rock, you’ve probably noticed a movement to include a variety of body types in advertising.

While once, not so long ago, if you opened a catalogue or looked at an ad, you expected to see thin bodies, airbrushed to perfection. Not only that, most of those perfect bodies were white. Thankfully, advertisers are beginning to listen to the outcries from women for better representation of race, of sexuality and gender diversity, of ability, and of body size.

I have been heartened to see that lately I have been able to look at ads and see bodies like mine right there front and centre, not relegated to a special section in the back called “Plus Size,” as though there are regular women, and then there's us. It makes me feel seen, and lets me know I am worthy of wearing the same clothes as my skinny counterparts.

But until very recently, even though we were seeing bigger bodies and more diverse models, they were still airbrushed to perfection. The bodies might be bigger, but they still weren’t natural. They were still a false representation of the “ideal” woman’s body.

For this reason, when an ad for a Knix bra popped up on my screen featuring a woman with visible stretch marks, my interest was piqued immediately. The model was thin and appeared fit (you can’t tell fitness from a photo after all) but her belly showed the tell-tale signs of the changes women’s bodies go through.

"Stop thinking so much, stop roadblocking your path to your own amazing self. Save your thoughts for something more life-giving and JUST DO." @thebirdspapaya inspiring us to JUST DO everyday. She wears the Evo Bra in a 2 and the Boyshort in M.

Maybe she had been through childbirth and this was a post-partum body. Maybe she had lost a good deal of weight. Maybe it was her souvenir from puberty. I don’t know the specifics of her history, and I don’t need to. Goodness knows my body is a roadmap of stretch marks, each with their own stories from many periods in my life. She doesn’t owe an explanation for her body simply because she is modeling a bra. But I was drawn to her because she was showing something that most advertisers pay good money to hide.

I refuse to use the words “real bodies.” I see that thrown around far too often, used to describe women who are not thin, or who have stretch marks, cellulite, or other things considered flaws. I dislike the term because it implies that thin bodies, or ones that come closer to the stylized ideal, are not real. All bodies are real. My big body is real, but it is no more real than that of my hundred-and-ten pound friend.

That said, all bodies are real, but all photos are not. Taking a photo of a real body, thick or thin, bumpy or smooth, and altering it to make it seem “better” does a disservice to everyone. Seeing this women showing her body, her beautiful, honest, true-to-self body, gave me hope that like diversity in advertising, unaltered photos would become more popular.

I checked the comments on the post, expecting to see as I often did on photos of big women comments of how nobody wants to see that, and other garbage. I was pleasantly surprised to see that the majority of the remarks were positive. Hundreds of people were as relieved as I to see an untouched photo used in advertising. We appreciated seeing her for who she really was, because it made us feel better about who we really are.

I then visited the Knix website and saw that this was not simply an attention-grabbing ad, but a policy they adhered to. Featured in their ads were women of all kinds, including folds on thin and big women, natural scars, simple faces. The women all looked confident. They looked comfortable. There was a sense that they felt empowered and happy during these photoshoots.

Knix went beyond body type diversity in their ads. Women of colour are featured throughout the website, and the “skin colour” bras come in a variety of shades – just like women’s skin does. Featured on the main page is a link to their blog, which currently features women sharing their stories of Pride for Pride Month.

These are seem like small measures for a company to take - little roll under the armpit here, a fuller belly there, some stretch marks covering this or that – but it all adds up to better representation. If everyone would take the lead from Knix and make ads more relatable, more accessible, and simply more realistic by showcasing the models’ real faces and bodies, maybe we could make some tangible strides towards body acceptance and positivity.

And for companies worried about losing business by showcasing their products on less then perfect bodies – don’t be. We want this. We want better representation in all areas. We want to see ourselves in your product, not a composite of perfect features. We are tired of Photoshop. We are drawn to natural. I guarantee Knix gained new customers by having the courage to do this – they certainly gained my respect and desire to support them.