Am I just out of luck? 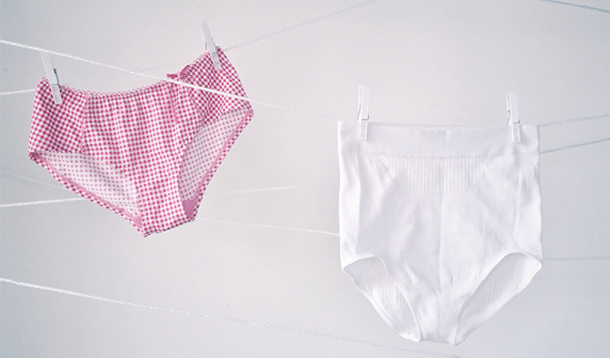 They are the source of much frustration, much money spent, and lessons learned, and yet I still don’t know how to dress my lower half with quality, comfortable underwear. Does such a thing even exist in this world? If so, where can I find it?

Underwear is my nemesis. It always has been.

I’ve never been a thin person; there’s always been lumpy parts, a problem which was exacerbated by having two children.

But even in my youth, I never knew what kind of underwear was right for me. In my teens, thongs were the big, sexy thing that all girls would wear. So I went out and bought myself some. Except the photos you see of the models wearing them, all have very taut, very flat lower stomach areas or what I like to call, the pooch or pouch area.

I do not have a flat pooch. So when I wiggled into one of these things, the tiny piece of fabric in the front dug in and made some super unflattering lumps, plus the whole permanent wedgie thing in the back.

I suffered through wearing those and other ill-fitting undergarments, just in case the opportunity should present itself to show it to someone. After I got married, I became more practical and started buying the “boy short” style, (I’m honestly a bit baffled why they were given this name, as I’ve never seen any boy wear shorts that tiny unless they were dancing on a stage of some kind). But they were basically like wearing shorts under your clothes and there were cute colours and fabrics, so that became my wheel house.

During my two pregnancies I basked in the comfortable, loving arms of maternity underwear. Turns out they even make cute styles and colours in those.

But now I’m a bit stumped.

I had baby number two eleven months ago, waved a sad goodbye to the maternity threads and went in search for some new pairs of tried and tested “boy shorts.” Much to surprise, it seems whatever company or brand I look for,  seem to sport a sad new feature – a thick band at the top made of a different fabric than the cotton undies themselves.

At first I didn’t think anything of it, until I tried them on. That band digs riiiight into my muffin top/hip area and makes some horrible lines. Lumpy, horrible lines.

What options are out there for us? How are we supposed to feel somewhat cute, if not sexy, underwear? Because let’s face it, after kids, it’s often hard to feel that way!

I know this isn’t a problem for the unicorn moms out there that I see who are tall and rail thin after popping out kids – you have all the options the underwear world has to offer you, and I try not to resent you for it, but it’s so hard.

I know Spanx or any iteration of control top underwear exists out there, and I have some for formal occasions. The truth is though, I'm just not the kind of person who will pour myself into those kind of garments on the regular.

Is there an underwear option that is comfortable  and cute that doesn't otherwise relinquish women like me to a life of cotton mom-give-up garments? I spent decent coin on some lovely new push up bras to help my self-confidence and gravity post child. But with the lower half of things, I am at a loss.

I hate the pooch enough as it is, and I’ve been doing ab exercises like a wild woman trying to defeat it, but until then (if ever) how do I dress me lower half?

Cassandra Scrimgeour
Cassandra is a mom of a sassy 5 year old daughter and a 1 year old son. Her life is a constant battle between the gym and junk food. She will never give up chocolate. Or sugar. Her chocolate chip cookies are locally renowned and enjoyed. She loves writing, reading with her feet up and when her daughter goes to bed without a fight. She is opinionated, often sarcastic and has knack for remembering more movie lines and Simpsons quotes than anyone has any use for. She has a personal blog https://cassandrascrimgeour.wordpress.com/ and can be found on Twitter @cassandystweets & Instagram @cassandyspics