What Happened When I Went Outside My Comfort Zone 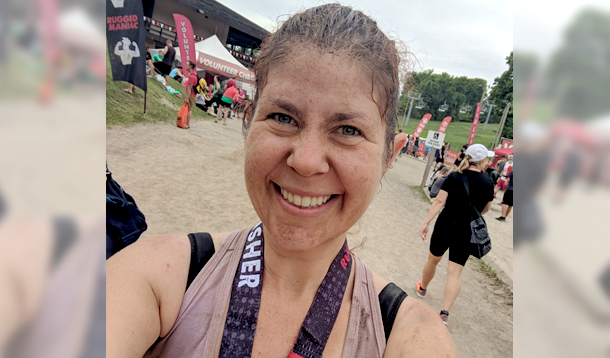 I like Zumba. I’m legit terrible at it but I enjoy it, because it’s fun. I don’t realize I’m actually exercising when I go.

I don’t like painful exercise. That’s why it’s taken me forty years to realize that running is basically the lazy person’s way to stay in shape. It’s not easy. I’m not saying that. It’s hard! But, you can walk out the door and do it. By the time you’ve driven to the gym you could be almost done your run already!

So, I’ve recently started running. But, I’m just about the last girl to try a friggin' obstacle course mud run. I’m not a masochist.

My husband, however, has never met a challenge he wouldn’t agree to try. He’s kinda nuts. That’s probably why, when friends asked him to do a mud run/obstacle course, he was all ‘sure. Why the hell not?’

Because they’re insane? That’s why not!

Of course, with just five days until the run, said husband gets injured and two days later, remembers about this crazy thing he’s committed to. It’s paid for.

“How about you go in my place?” he suggested. And, I laughed. Like, for real, I actually laughed.

I really like the people he was to run it with. They’re pretty good friends of ours. It could be an adventure. It could be fun! Why the hell not?

I’m not sure how serious he thought I was, but by the end of the night, his registration had been changed to my name, and this chick, who only runs around the neighbourhood and avoids mirrors at Zumba, was going to run a crazy 5k obstacle course up and down a friggen ski hill.

But, you guys, I did it. I totally did it. I attempted all but one of the obstacles (I seriously avoided an easy one, for no real reason. I think I just wanted to push myself to make sure I completed the rest, which would all be way more of a challenge), and I completed most of them!

I hate heights but I ran up ramps and climbed up and over walls. I literally leapt over fire and made it across two whole rings until I landed in the freezing water below.

My best friend taunted me in only the way a friend who has known you for you for almost thirty years can.

“I can’t wait to see how this turns out!” she said. I couldn’t either. It was that out of my wheel house.

I’m totally bruised. My left wrist is not happy, and my right leg is pissed. My abs have just started hurting. But, I’ve been on a high all day.

I did it! Me! I had an awesome coach - my friend Meghan, who stood beside me the whole way; told me I could do it when I wanted to climb back down. She held obstacles to be more steady so I could get myself through or over. Mostly, she made me feel like I could do it by repeatedly saying I could. She was right, I could do it. I did do it. 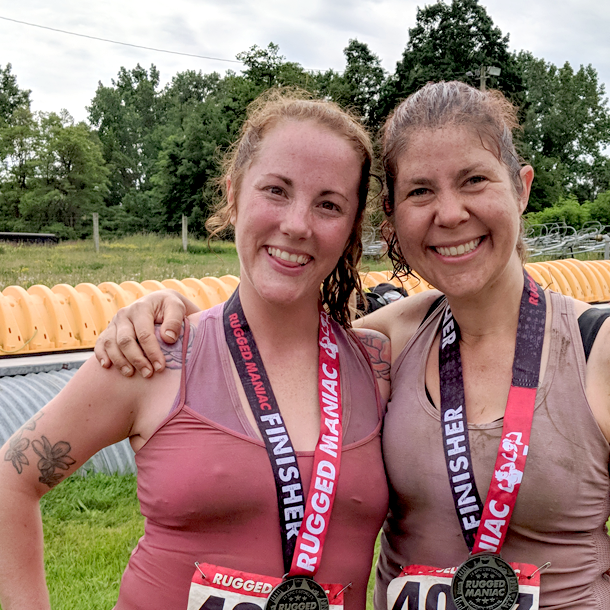 This mom of two, who despised phys ed, who often recounts ditching the school run days with my best friend to hit up Mc D’s instead, this gym-goer who is literally on her fifth Goodlife membership, climbed up rope walls and down precarious ladders and over wobbly lilypads, to run through the finish line, arm-in-arm with my friend/coach, to receive my well-earned medal at the end.

So, find your Meghan, and sign up for a crazy mud run. Do something you think you can’t do.

Maybe, give yourself more than three days to prepare though.  When I was finished, there were people at the finish line with arms in slings and ice packs around ankles. It was no joke. You can get hurt.

If I can do it - this girl who hates heights and pain and doing anything that is guaranteed to hurt a little – you can, too.

I probably looked like I wanted to die the whole time. I might have doubted I could do it. That’s why I insisted Meghan and I high five after each and every challenge. Every obstacle turned into an accomplishment.

I didn’t just finish. I worked my ass off and overcame fears and confidence issues and just friggen did it.

That’s not to say I’ll ever do it again. I’m proud to say I did. That’s enough for me!

Maybe I will, though. It'd be a good reminder that maybe I’m much stronger than I realize.